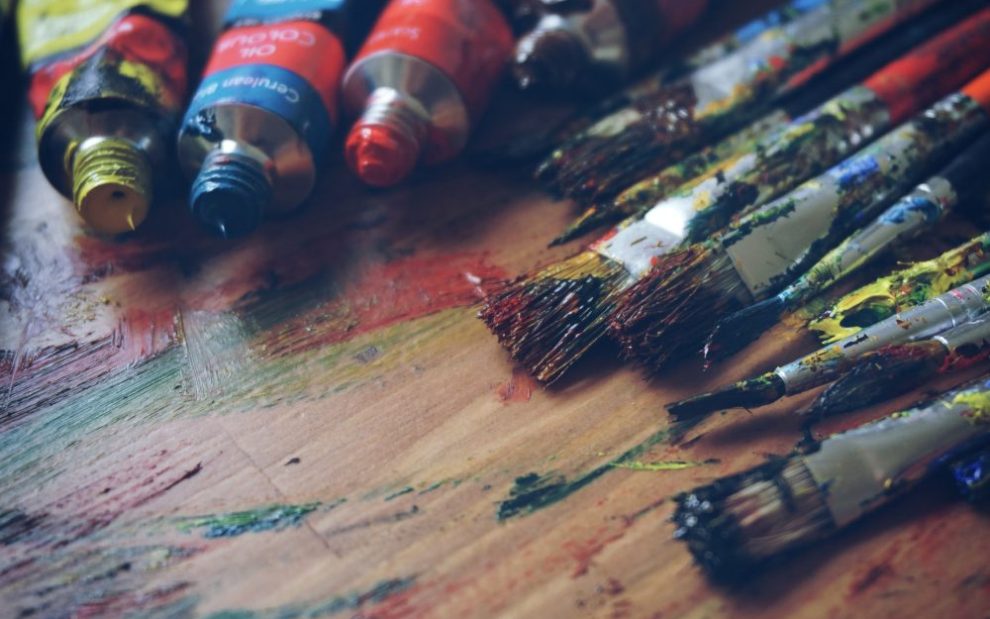 Catholic tradition has long been enriched by the work of men and women who turned to art as a means of coping with fear and loss. Dante’s Divine Comedy, and the mystical writings of Julian of Norwich come to mind. But in the ancient Greek plays of Aesychlus and the Noh plays of Japan, we see the origins of the genre of tragedy, revealing how universal and sacred is the need to work out suffering through artistic expression.

With extended lockdowns, I think it only gradually dawned on us that we were living through an historic period of isolation. And in the same gradual fashion, we found ourselves turning to or creating our own art as a consolation.

Before Covid, John Robinson, a math teacher in Florida, was a dedicated live music fan, often traveling the country to the concerts of his favorite Metal group Zao. That ended with the lockdowns, and he told me that it hit him pretty hard.

To compensate, Robinson found himself collecting vinyl records. “I had started collecting a few over the last few years, although sparingly,” he told me by email. As a teenager, he had “tons of records, and spending time alone in my bedroom spinning records on my suitcase record player, absorbing the artwork, reading the lyrics… was a daily ritual.”

When Covid struck, he used his stimulus check to purchase a new turntable and a few new albums to spin. I’m a full decade older, but I have to admit Robinson’s comments sent me to a collection of LP Hollywood film soundtracks by legends like Jerry Goldsmith and Ennio Morricone I still keep in my attic.

“Not only did I enjoy listening to each new record over and over,” he said. “I found myself purchasing some of the classics from that era and reliving the experiences and thoughts of my younger years, but on a much nicer, updated system.”

As the pandemic eased, Robinson has been able to see live bands again and visit record shops in person, but he’s so glad the pandemic reconnected him to the old music format.

For Pittsburgh-based artist Sara Tang, the lockdowns offered an opportunity for more personal reflection. Tang is an independent painter with her own website, featuring an astonishing range of portraits and impressions.

“Art weaves through all of life,” she told me. “If I could compare the time to fields being gardened, I found that alternating among the fields of inspiration, creating, collaborating, and of course, a ‘fallow’ field to let things percolate, gave me a semblance of balance.”

With a fellow artist, Tang started a virtual storytelling slam, ‘Stories in the Time Of…’, a Zoom-based community that has grown since the lockdowns. “I am amazed and filled with wonder every time I attend and hear true, personal stories from everyday folks. Really powerful stuff. We are, after all, ‘the storytelling animal.’”

Joanna Bratten, a marvelous American poet and teacher living in London, said that finding writing time was never difficult, but the lockdown gave her more opportunity. She wrote a poetry chapbook, although not with any intention to write her way through the pandemic. “Very little of the poetry deals with the pandemic itself,” she said.

But there was a personal element to work out: the sudden death of her father, a farmer in Ohio. “With repeated stints of self-isolation and distancing, being forced back on oneself to think, quite intensely, certainly led to it being a creative time,” she said.

This was something we shared, as I found myself delving into research for what would become a two-act play that had been simmering in the back of my mind for years before the lockdowns provided me the time to finally tackle it.

In contrast, Kevin Johnson, an adjunct professor of philosophy at Sacred Heart University in Fairfield and an experienced podcaster, stopped writing altogether. He found himself unplugging from everything. He stopped listening to music, watching TV, dropped off social media. Instead, he told me, he responded to the need to get out doors and just listen. This led to experimenting with ways to creatively explore silence.

“I’ve gone all in on audio,” he said. “And I don’t mean music. Podcasts. Listening to all sorts of nature sounds. I could literally sit and listen to the surf recorded. Or the wind through the trees or the prairies.”

Johnson also began exploring more designed pieces of artificial recording, like generating the sound of someone walking through a train station or a library, which in turn has inspired more ambitious ideas for creating a podcast as radio drama., and given the explosion in demand for audiobooks, I can see such a venture becoming popular.

During the first part of the pandemic, Ontario-based author Melinda Robinson did a lot of creative home renovation instead of writing, but found that with the kids home all the time it was hard to carve out space to create.

As the pandemic went on, she felt the pressure to resume writing, and eventually started a new novel. But she also found it difficult without some social creative engagement. And for this, Robinson found herself relying on her weekly gaming group.

“I know a lot of people don’t think of table-top role-playing-games as art,” she said. “But I play Storyteller systems that emphasize collective story-making and character development and that don’t really allow for ‘out of the box’ scenarios.”

Irim Sarwar, an American of IndoPak ancestry living in the UK, took refuge in music and movies. Hardly a new outlet for her, she said, “But I leaned into it even harder than usual in the pandemic, dealing with emotions around identity, family, internal dynamics, crystallizing my faith.”

Currently a churchwarden exploring a vocation to the priesthood in the Anglican Church, Sarwar singled out the music of Azi Schwartz, the cantor at Park Ave Synagogue, for getting her through the first year of Covid. She’d fallen in love with his music on YouTube in autumn of 2018, “when his music got me through a friend’s death.”

Sarwar also turned to Bollywood, especially music videos from films about Partition, the traumatic time of upheaval during the formation of modern Pakistan and India as independent nations, which continues to haunt so many families who fled.

Joanna Penn Cooper, a poet and writing teacher in North Carolina, found herself going through different phases of artistic engagement.

“Like many people with young kids, my life early in the lockdown was about trying to keep my child occupied, and some of that involved making and consuming art. I bought Lynda Barry’s book Making Comics, and we sat down together and did some of those drawing exercises.”

Her reading habits varied until the summer of 2021, when she began writing a full-length collection of flash memoir pieces. As she dove into that project, Cooper read several books that straddle more than one genre, ones that blurred the boundaries between poetry, flash memoir, and short story—something she found appealing, especially living at a time that seemed designed to fracture attention spans, she said. “These forms feel even more relevant.”

In contrast, I often found myself scouring eBay for classic science fiction paperbacks from the 1960s and 70s, and often for purely nostalgic reasons. It seemed self indulgent to me at first. But then, art can be born from nostalgia, too.

TagsArt Books and literature Music Sounding Board TV and film