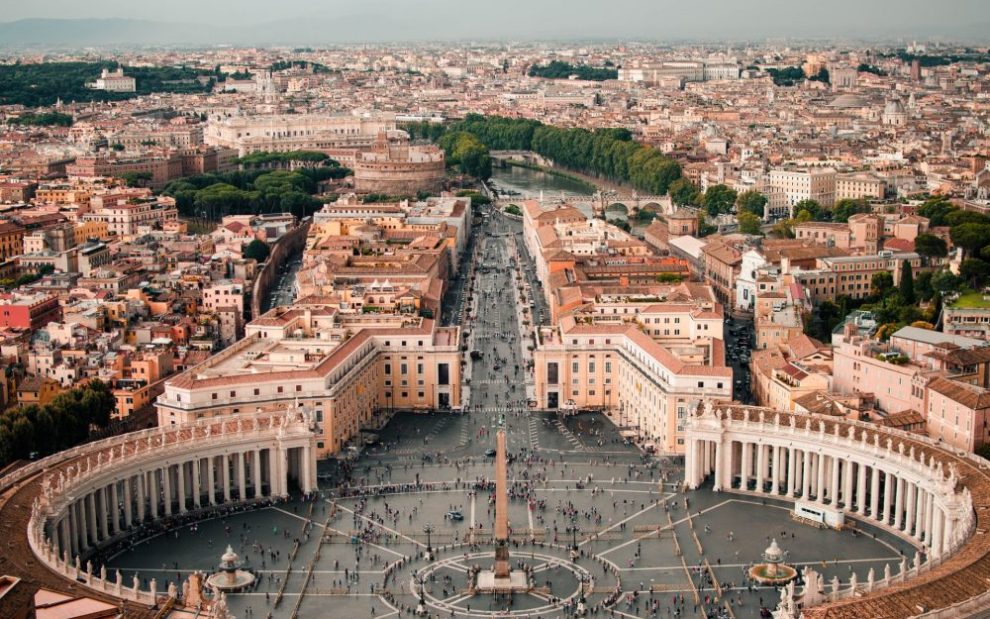 On March 19 Pope Francis issued a new apostolic constitution for the Roman Curia, the offices that help him govern the Catholic Church. Praedicate Evangelium (Preach the Gospel) has been in the works since the beginning of Pope Francis’ pontificate nine years ago. It is slated to go into effect on June 5, replacing the charter Pastor Bonus (The Good Shepherd) that was promulgated by St. Pope John Paul II in 1988. The completion of this constitution signifies an important milestone in Pope Francis’ ongoing work of making the church more pastoral, synodal, and inclusive.

One significant change in the new constitution is that leadership of Vatican offices traditionally run by cardinals is now opened to all baptized laypersons. This includes women.

According to internationally acclaimed scholar Phyllis Zagano, this move is less about making changes to women’s roles in ministry than it is about the pope’s determination to involve as many competent people as possible in the management structure of the church.

Zagano is a senior research associate-in-residence and adjunct professor of religion at Hofstra University. She is the author of 23 books, including Women Deacons: Past, Present, Future (with Gary Macy and William T. Ditewig) (Paulist Press), Women in Ministry: Emerging Questions About the Diaconate (Paulist Press), Women Deacons? Essays with Answers (Liturgical Press), and Women: Icons of Christ (Paulist Press). She is a leading expert on the history of women in the church and an advocate for the ordination of women to the diaconate.

According to the new constitution, “Any member of the faithful can preside over a Dicastery or an Organism, given the particular competence, power of governance and function of the latter.” Can you talk a bit about the practical implications of this, especially for women’s roles or the understanding of women’s vocation?

First, I would distinguish between management and ministry. The new constitution deals with the management of the church. Toward the end of the 16th century, in 1588, the first organization of the Curia occurred. The purpose was to gather the cardinals in Rome—cardinal deacons, cardinal priests, and cardinal bishops—into one organization to manage the affairs of the church. They were divided into different departments to manage different responsibilities. For example, there was the Department of State for relations with other countries. There was the Holy Office, which later turned into the Congregation for the Doctrine of the Faith.

At the time, the head of every office was a cardinal. However, historically, men who were not deacons, priests, or bishops could be cardinals. As things evolved, by the 20th century one had to be a priest to be named a cardinal. And since the 1983 Code of Canon Law, anyone named a cardinal is asked to accept episcopal consecration.

With the new constitution, the offices, which used to be called congregations, councils, and commissions, will now be called dicasteries. The heads of these offices can now be any of the faithful: A bishop, priest, deacon, married woman, married man, single layperson, or cardinal could be appointed. The important point is that Pope Francis wants the most competent people running these offices.

Another interesting point is that Pope Francis says that when choosing clerics, they must be chosen equally from both the Latin churches and the Eastern churches as well as from among religious. So, for example, one office cannot be staffed completely by priests from one religious order.

It’s all management. But is it important? Of course.

Both Pope Francis and Pope Benedict XVI have said that women need to be given more space in the church. But the expression they used, in Italian, is the expression you would use if you were sitting at a table with others and your friend came along and you said, “Make room.” Does that mean expanding the number of people in the management structure? Not necessarily. What it means is, move over, let women have a place.

Critics of Pope Francis may view this as a drastic departure from church teaching. However, the Vatican press release clearly states that this reform is grounded in tradition. What are the theological underpinnings of this development?

It is not a departure from church teaching, but it is a departure from tradition with a small “t,” because until now the Curia has been staffed by priests, bishops, cardinals, and religious—including women religious—with a few secular laypersons.

Over the past 20 to 30 years, women religious and other laywomen have been working as officials or as officers. So, it is not new to have laypeople in the Curia. What is new is having laypeople in positions of authority: as heads of offices. The members of a dicastery are all cardinals, but they are not the people doing the work. The members come in for meetings once or twice a year. The people doing the work are the staff.

There are already very competent women working in the Vatican, but many only work as scribes or technical assistants. Many women who work as secretaries in the Curia have Ph.D.s and speak several languages, but they are not the heads of offices.

Having laypeople work in management is not really a departure from tradition so much as an expansion of tradition. The apostolic constitution is the highest-level document a pope can levy. However, he is not changing doctrine.

In other words, this document is not really a departure. It is grounded in tradition and rooted in the past.

Could this open doors for more opportunities for women later? What does this mean for the future?

Pope Francis wants to get everyone who is competent at the table. But this is unrelated to the question of ordaining women. However, what is interesting is the history of so-called lay cardinals. The last non-ordained cardinal, Teodolfo Mertel, died in 1899 He was named a cardinal two months before they made him a deacon, but he never became a priest. It was only the 1917 Code of Canon Law that required cardinals to be chosen from among priests.

I get this question all the time: Can a woman be a cardinal? I think that yes, you can have a lay cardinal, but it would require a dispensation from the law, a waiver. To me, it would be easier to have a woman deacon cardinal, because there are still formal ranks of cardinals: cardinal deacon, cardinal priest, cardinal bishop.

Given the history of women as deacons, which you have written about extensively, do you think this new apostolic constitution might be a step toward having women deacons again?

I think it continues the discussion. But again, we must distinguish management from ministry. Pope Francis sees this new apostolic constitution as part of the ministry of spreading the gospel. Well, if he wants to spread the gospel, he needs to ordain women to preach the gospel. And if he wants to argue that women are made in the image and likeness of God, he needs to have a woman deacon standing next to him, proclaiming the gospel at St. Peter’s Basilica. Because large portions of the world, unfortunately, hold the idea that women are chattel, that it’s OK, for example, for women to suffer female genital mutilation, that it’s OK for men to simply discard women.

In the early church, deacons managed the church’s charity. You brought your gifts to the celebration. The gifts of bread and wine were brought to the altar by the deacon. Then, at the end, if you needed an egg, a blanket, or a chicken, you got it from the deacon. The last person in line to get paid was the priest. But the diaconate as it existed was quashed. The priests took over the treasury, and the diaconate became highly ceremonial. Soon, no one was ordained a deacon unless he (and only he) was eligible to become a priest.

The minor orders—porter, lector, exorcist, and acolyte—were part of the cursus honorum leading to the subdiaconate, diaconate, and priesthood.

Any additional thoughts you might have that could help us understand the new constitution?

We need to recognize that Pope Francis is trying to show the church that everybody matters and that we all have distinct abilities.

We do need more ministry, and that would encourage more priestly vocations. But we need more ministers. Pope Benedict XVI, in his 2009 motu proprio titled Omnium in Mentem (To Everyone’s Attention), clearly distinguished between the priesthood and diaconate. And there has never been any Vatican statement against ordaining women as deacons.

In 1997 a subcommittee of the International Theological Commission completed a document indicating that the church can ordain women deacons. But then-Cardinal Joseph Ratzinger, who was at the time the prefect of the Congregation for the Doctrine of the Faith, refused to sign it, and the document was not published. Two members of that commission have told me this.

Cardinal Ratzinger then created a completely new subcommission, all male. And it published a revised document that determined that the question of women deacons is something the magisterium had to decide. Well, the magisterium at the time was controlled by St. Pope John Paul II, who did nothing. Then the next pope was Benedict XVI, the former Cardinal Ratzinger, and he did nothing.

It was not until 2016, when the sisters of the International Union of Superiors General (UISG) asked about women religious who already were doing the work of deacons being ordained to that office, that Pope Francis agreed to establish a commission. I was nominated by the UISG and spent two years on this commission. We produced a document, and Pope Francis gave a portion of it to the UISG leadership in May 2019.

Then, on April 8, 2020, he named a new commission, but it did not meet until early September 2021, for one week. Its February 2022 meeting was canceled shortly after it became known that one of its members, Caroline Farey, had signed an anti–Pope Francis, antivaccination manifesto published by the Canadian website Lifesite News. There is no public information about any future meetings.

I was told by an official of the Congregation for the Doctrine of the Faith, sitting at lunch, that women could not be ordained deacons because women cannot image Christ. Therefore, the title of my book is Women: Icons of Christ.

Nobody argues about the historical fact of women deacons. They existed in the early church. But I think the world cries for the restoration of women to the diaconate. The church must argue, and argue forcefully, that women can be icons of Christ.