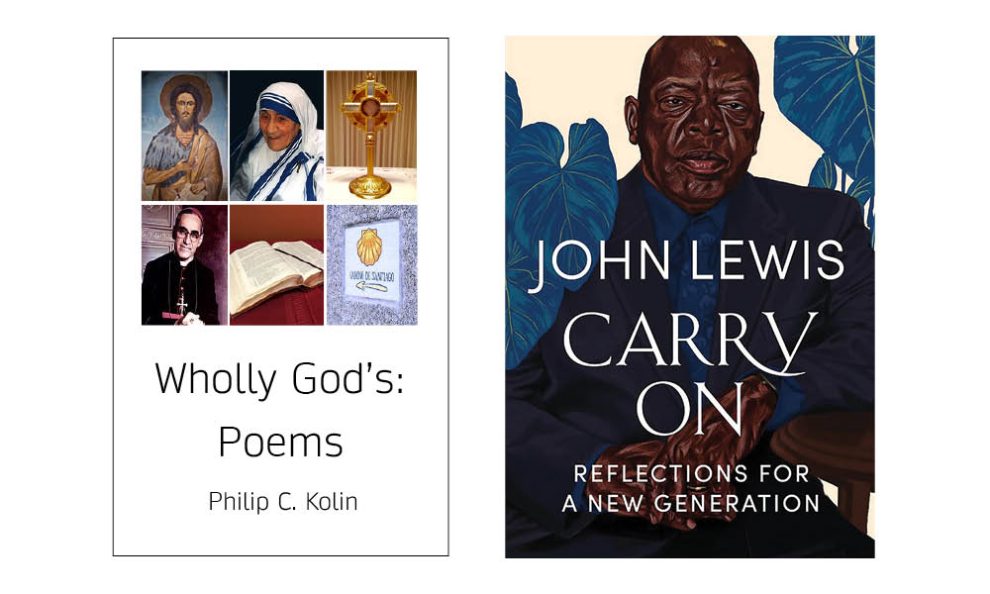 It has been said that the Eucharist is the most perfect metaphor because it is the only metaphor that is literally true. Poetry may fall short of sacrament, but it has the power to reflect sacramental reality—religious poetry especially so. “Religious poetry” is a capacious genre: We might think of the psalms, the hymns of Thomas Aquinas, or the poems of Gerard Manley Hopkins. Wholly God’s, a new chapbook of poems by the prolific Philip C. Kolin, participates in this tradition. Even though the “Body of Christ cannot be squeezed into syllables,” as Kolin writes in “Eucharistie,” the imago Dei shines bright in these poems.

The theme of Wholly God’s is holiness, the golden thread that binds together the body of Christ in all its manifold incarnations. The short collection is divided into three sections: “Pilgrims,” “The Corporal Works of Mercy,” and “Martyrs.” All three sections invoke a variety of saints, from Maria Goretti to Mother Teresa, John the Baptist to Óscar Romero, Compostela pilgrims to the Pinks. The eternal present of the communion of saints joins together the first disciples (“Twelve first, then seventy/all with tongues on fire now”) with Franciscan friars who help the homeless and bury the dead; the 21 Coptic martyrs who “joined other headless saints—John the Baptist, St. Paul, St. Denis”; and even the “saints of the Corona scourge:/doctors, nurses, respiratory therapists, EMTs.”

Like a litany of saints sung before the altar, the poems in Wholly God’s invite us to contemplate the mysteries of faith and celebrate the blessed communion to which we all belong.

Wholly God’s is true to its title in another way: The author donates all proceeds from the book to charity.

Carry On: Reflections for a New Generation

In the summer of 2020, as people took to the streets to express their anger and grief at the decades of police brutality that led to the deaths of George Floyd, Breonna Taylor, and countless others, John Lewis stood with them. The 80-year-old congressman and titan of the civil rights movement was dying of pancreatic cancer when he visited Washington, D.C.’s Black Lives Matter Plaza last June. A reporter asked what he thought of the plaza, and Lewis replied, “I think . . . the people in D.C. and around the nation are sending a mighty, powerful and strong message to the rest of the world.”

It is easy to imagine any person who suffered racist violence at the hands of a government that preached equality, witnessed the deaths of several of their friends, and saw the policies so many activists fought for gutted might be cynical about the future. Carry On, a collection of Lewis’ parting thoughts about this life and the life of our nation, shows the power of facing these blows with unrelenting hope.

Some of his anecdotes are gut-wrenching, such as when he describes how he and other teenage activists learned how to roll into a ball to lessen the force of the blows they received when police beat them. Others are sweet: Lewis really liked Coca-Cola and loved sharing it with visitors to his congressional office.

The core of Lewis’ message, however, is almost devilishly simple: Listen to people; admit your mistakes and learn from them; forgive one another; and always, always, always vote. In the last years of his life, no one would have blamed Lewis for taking a break and resting on his laurels. Carry On shows he never did.

Mercy and the Rule of Law: A Theological Interpretation of Amoris Laetitia

Theologian and lawyer Bednar sheds light on Amoris Laetitia, explaining it in solid terms and with relatable examples that laypeople can better understand.

This collection of candid essays written by the late Evans and compiled by author Chu invites us to reflect on faith, life, dreams, doubts, and spiritual wholeness.

Pastor and author Turner educates readers on the blessing, consecration, and usage of the three different sacred oils used in the Catholic Church.