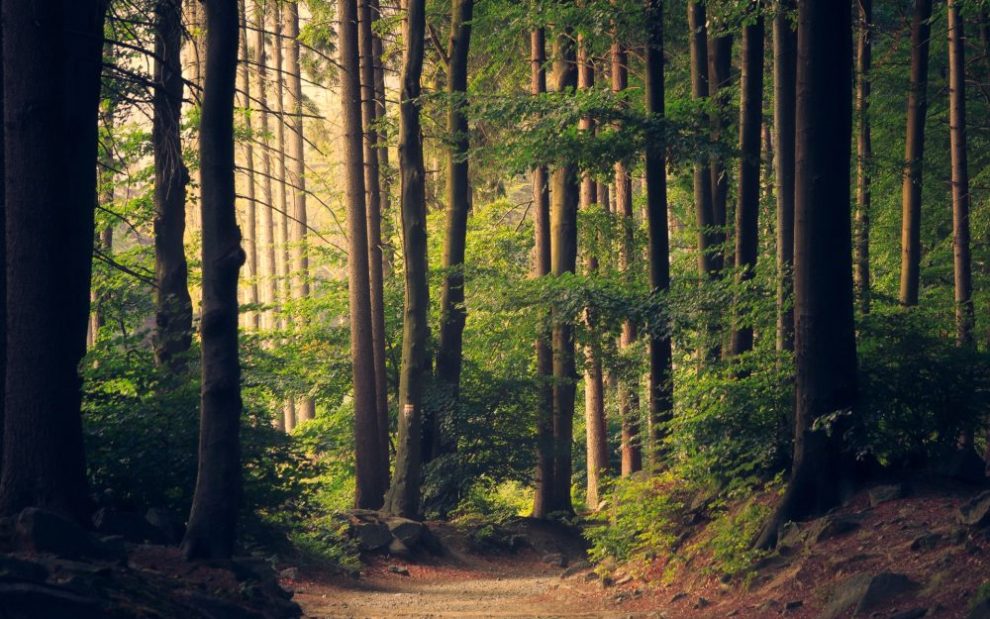 Trees talk to each other and send over resources when a neighbor is in need. Trees nurture their children. Trees sound the alarm about environmental threats. Trees grow stronger and more vigorous when raised in diverse communities, and they struggle in artificially planted, monoculture forests where all of the trees are the same age. Trees are, as it turns out, social and more than a little like us.

So says forester and bestselling author Peter Wohlleben, whose book, The Hidden Life of Trees: What They Feel, How They Communicate—Discoveries from A Secret World (Greystone Books), inspired a feature-length documentary by the same name directed by Jörg Adolph and Jan Haft.

It’s a gorgeous film. Haft’s camerawork and Adolph’s direction deliver evocative, immersive portraits of roots, trunks, canopies, and stunning views of the night sky looking up from the forest floor, accompanied by voiceover readings from Wohlleben’s often poetic book. We hike alongside the German forester through a 4,000-year-old beech forest in Hümmel as he translates scientific studies into accessible and passionate messages about the magical interconnectedness and constant communication among forest plants that is going on right under our feet.

In a naturally developed forest, tree roots of varying ages and species tangle, mingle, and weave closely together. Underground fungi of threadlike hairs, called the mycorrhizal network, bridge the gaps between individual root systems, creating a massive network of living interlinkages that transfer resources such as water, nitrogen, and defense compounds from one tree to the next. Mature, tall beech trees with leaves at the sunny top of the canopy produce and move carbon and sugar down to young trees growing in the shadowy understory where it’s harder to photosynthesize. A birch tree under attack by insects sounds an alert via chemical and electrical signals through the canopy to nearby basswood trees, warning them to defend themselves biochemically. Oak trees, though spread across many acres, precisely coordinate their production and release of acorns so that wild boars cannot consume the entire crop, allowing at least some to root and grow.

Foresters and tree scientists sometimes call this the “wood-wide web” of shared information among plants and fungi. The shared resources create a sort of wood-wide economy, and a rather socialist one at that.

Wohlleben kneels next to the gnarled remains of an ancient tree truck. The interior of the stump is decomposed, yet the stump is still alive. How? Underground, other trees are feeding it sugar. Wohlleben postulates in his romantic way that the young ones are keeping the old stump alive to benefit from the wise one’s knowledge.

The shared resources create a sort of wood wide economy, and a rather socialist one at that.

Such interdependence is testable. Scientists around the world are recording and measuring how trees communicate and share. Trees help others in need. They work for the greater good. And when trees live for centuries, the greater good of the larger community becomes personal well-being.

Like humans, trees are happiest growing old together in a community. Modern forestry practices of clear-cutting a section of forest and then replanting with trees of a single species are costly and unwise, Wohlleben argues—Mother Nature can replant 10 times the number of seedlings in the same space at no cost. Industry-planted, same-age “orphan” trees, all developing at the same rate, grow too quickly, unchallenged by having to collaborate with a community of trees and unassisted by older growth. The slower the youth phase of a tree, the longer the tree will live, says Wohlleben: “If we want to use forests in the battle against climate change, we have to allow them to grow old.”

Standing in the aftermath of a forest fire, he explains that bulldozing the burned vegetation puts destructive pressure from big machinery on the interconnected root systems underground. Cleaning up the forest, plowing the land, and replanting looks like the right decision, but it’s not, he says. Instead, leave the trees to recover and heal. Let the rotting wood sit and stop interfering. To raise a virgin forest, he advises, keep your “hands in your pockets and watch.”

A fallen tree is filled with nutrients for its offspring and community. Fungi and insects help break it down, and time-lapse photography shows us the remarkably beautiful process. Forest soil should be crumbly, rich, and occupied, Wohlleben says: “There are more life forms in a handful of forest soil than there are people on the planet.” Wohlleben argues for protecting these essential components of the ecosystem by changing forestry practices. He wishes for a return to horse logging, a horse-drawn method of dragging logs out of the woods and maneuvering them carefully around young trees, avoiding clear-cutting and the use of heavy machinery.

Like humans, trees are happiest growing old together in a community.

Wohlleben journeys to the Fulufjället Mountain in Sweden to visit Old Tjikko, a Norway spruce tree that has repeatedly regenerated new trunks and branches over 10 millennia. It looks spindly and unimpressive, but underground it has a root system that existed before mammoths went extinct.

It is humbling. It seems sacred to Wohlleben. And, he hopes, to us.