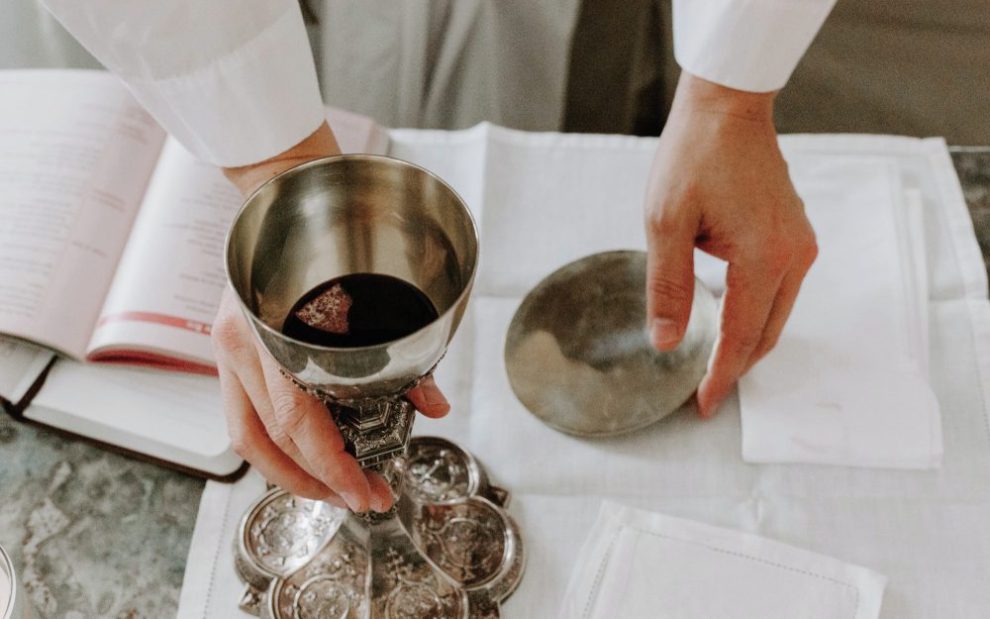 Earlier this year, a lot of (sometimes misleading) controversy swirled around the question of abortion, Catholic politicians, and communion. This isn’t a new question. There was plenty of discussion (and controversy) back in 2004 when John Kerry (a Catholic) ran for president. The Latin American bishops addressed it (again controversially) in their 2007 Aparecida document.

For many Catholics, all these debates seem out of place—we sometimes hear that we should not “politicize the Eucharist.” And it’s true that the Eucharist (or any Catholic activity) should not become a weapon in partisan battles about government. At the same time, putting the particular controversy aside, we should consider a deeper question: What is the relationship between this most sacred ritual of our Catholic faith and our moral and political practices? Here, we should immediately realize that there needs to be some connection! The Sunday Eucharist, as the “source and summit of the Christian life,” according to the Catechism of the Catholic Church, must be related to the views we express and the choices we make the rest of the week. Otherwise, it’s just an empty ritual or a practice that only has to do with the life to come.

The sacrifice requires a recognition that we are all sinners.

But what is this relationship? The U.S. bishops have committed to a three-year Eucharist renewal to help Catholics understand and appreciate better what the Eucharist is. To understand the relationship between the Eucharist and our ethical lives, first we must have some sense of meaning of the Eucharist itself. There isn’t a single meaning because the Eucharist is perhaps the densest, richest ritual of our faith. It’s rich with many layers of meaning. We often think first about the real presence of Christ, a commitment that became especially important for Catholicism in contrast to Protestantism. It’s really the body and blood of Christ. But how does that get us to thinking about its relationship to the moral life and social justice?

More helpful is to place the Eucharist in its liturgical setting—in the Mass—and think about the two main things it is: a sacrifice and meal. We approach the altar and come to the table. These two meanings are meant to be combined, and we might see that more easily if we recognize a crucial time element: The sacrifice is a making present of the most important event of the past, and the meal is a making present of the ultimate and eternal future. The past is the sacrifice on the cross of Christ’s own body and blood for our sins. The future is the great feast where all humanity is gathered as one family, healed of all division, fully united around the victorious Christ. In the Mass, we truly come to participate in this past and future. The sacrificed Christ and the victorious Christ are truly present to us.

What does this double image of sacrifice and feast tell us about our life in society? Here again the imagery is rich. The sacrifice requires a recognition that we are all sinners. From the opening of the liturgy (“Lord, have mercy”) to the last words before we receive the Eucharist (“Lord, I am not worthy”), there is a recognition that we receive this forgiveness as a gift, not as something we earn. This doesn’t just mean “everyone makes mistakes.” It means we should put away any semblance of pride or self-righteousness and do so especially by extending this forgiveness to others. The parable of the debtor who is forgiven a great deal, then goes out and refuses to forgive a small debt owed to him (Matt. 18:23–35), can apply to much of our moral and social lives. Do we refuse to offer forgiveness to our enemies? Do we harbor resentment over sins of the past? Do we arrogantly hold ourselves to be “good people” trying to defeat “bad people”?

The feast dimension requires a recognition that we are all ultimately in solidarity with one another. The liturgy is a gathering that calls us to celebrate with all others. This is our hope for a communal, eternal life, so vividly explained by Pope Benedict XVI in his 2007 encyclical Spe Salvi (On Christian Hope) and so vividly exemplified by various actions of Pope Francis. The church is called as a whole to be, as the Second Vatican Council put it, the sacrament of the unity of the human race. Thus, we are called to put away any division that is a countersign to this unity. This is why racism and other forms of ethnic supremacy are so antithetical to the Eucharist.

The feast dimension requires a recognition that we are all ultimately in solidarity with one another.

This is why St. Paul criticizes the Corinthians for allowing the community to be divided into economic classes with some fully satisfied and others hungry (1 Cor. 11:17–22). Yet this is also why the church is concerned about the advocacy of certain social policies, like the killing of vulnerable life, which seem to manifest inevitable and interminable division in the human family. Do we share the vision of God’s kingdom coming on earth as it is in heaven? Or do we confuse that vision by going out from the Eucharist and refusing solidarity with others—the poor, the immigrant, the prisoner, the unborn?

If we reflect deeply on these two aspects of the Eucharist, we may ourselves have to reform our consciences and see how our participation fails to testify to what God has done for us (in the free gift of forgiveness) and what God is doing through us (in the unification of all humanity). We may even find “mortal sin,” where we have cut ourselves off from God’s true vision and truly followed our own paths away from that vision. These are occasions to see how important the sacrament of reconciliation is. Yet access to that sacrament depends on our purpose of reform. We must be committed to change our ways, to learn true humility and solidarity. We won’t ever do that perfectly, but we must commit to trying, to aiming at that gratitude of the forgiven sinner and that longing for the communion of all the saints.

These reflections don’t generate an obvious answer to the charged question of who should receive the Eucharist and who shouldn’t. But they should help us see that it’s a real question that actually confronts all of us once we recognize what we are really doing in our Sunday celebration. And most importantly, it should be clear that what we are doing in the Eucharist should have a lot to do with how we conduct our moral and political lives—to inspire us to live out our response to God’s gracious activity in forgiving us and calling us to eternal communion as one family.