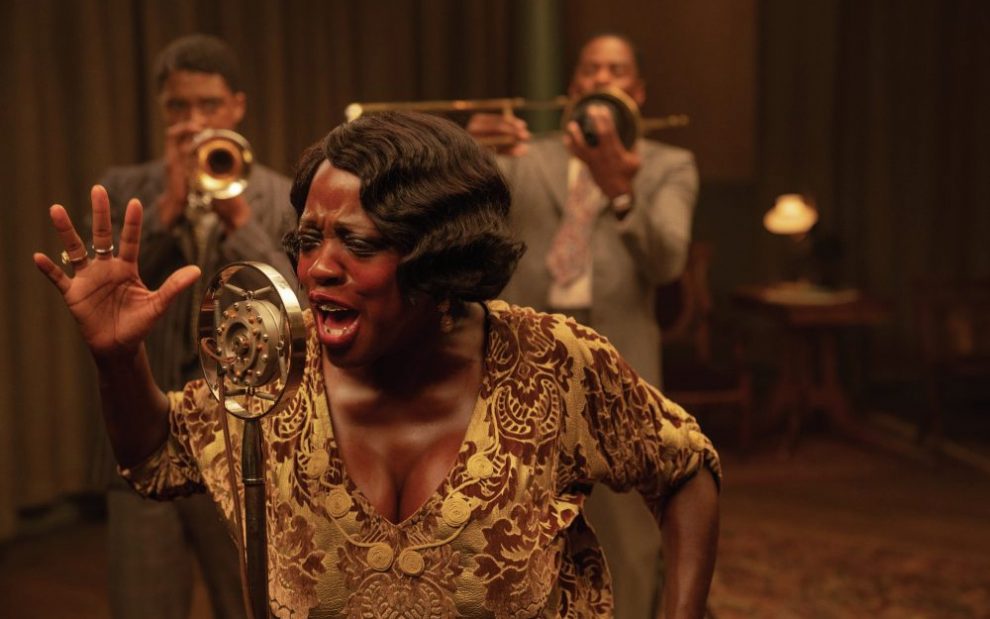 I have little to no interest in “Christian films.” I find most boring and trite, seldom saying anything that feeds my soul. Neat or sanitized affirmations of doctrine may even truncate the credibility of the Christian tradition, hamstringing its ability to respond with nuance to the inevitable complications of life. Yet when I read a Christian reviewer describe a film like Ma Rainey’s Black Bottom as “secular,” that label seems to miss the mark.

Based on the Tony Award–nominated play by the late August Wilson, the film is the second of what may be 10 to be produced by Denzel Washington. Wilson’s greatest achievement was the Century Cycle, with one play set in each decade of 20th-century African American life.

Gertrude “Ma” Rainey, the “Mother of the Blues,” was a real person whose history is largely unknown. The film’s fictional story of one recording session in 1927 Chicago during the first wave of the Great Migration pits her against a young, talented, and brash trumpet player named Levee, whose anger, drive, and demons threaten to ruin his life. Fences, the first to be produced in this new series, garnered four Oscar nominations and one win. Ma Rainey’s Black Bottom is projected to also fare well, especially as the last film with the late Chadwick Boseman, who stars as Levee alongside Viola Davis as Ma.

At a crisp 94 minutes, the film is well directed and faithfully adapted, with career-defining performances from the small ensemble. But since films by their nature beg for visual storytelling, Wilson’s extraordinary monologues remind us they are most at home on stage.

None of Wilson’s plays can accurately be described as “secular.” This story of a group of rough and tumble blues musicians is a perfect opportunity to clarify that. Is the dialogue filled with harsh language? Yes. Are some characters explicit in their sexual advances? Yes. So if “religious” means genteel and socially acceptable, Wilson’s blues musicians are neither. But if “secular” means unconcerned or indifferent to questions of religion and the possibility of ultimate meaning in the world, that neither describes Ma nor the men who work for her.

Levee curses God repeatedly. He may have cause to do so. His rage shouldn’t be interpreted as indifference to ultimate questions, but engagement with them. He allows us to peer through a terrifying window into a life with no horizon. He fights for human dignity but lacks sufficient tools to build and protect it. Ma conversely comes off from the beginning as difficult and intimidating. By the end of the story an astute viewer will see that she is in the same fight, yet she understands the rules of the game and how to preserve herself and those whom she loves.

They don’t care nothing about me. All they want is my voice. Well, I done learned that, and they gonna treat me like I want to be treated no matter how much it hurt them. They back there now calling me all kinds of names . . . calling me everything but a child of God.

The blues that Ma sings gives voice and meaning to the aspects of life that “church folk” don’t want to talk about in polite company: sex, romantic love, heartache, anger, power, bad choices, and sheer delight in the bodily nature of being human. She waxes eloquently, “I ain’t started the blues way of singing. The blues always been here.” In a line dropped from the film script but present in the play, Cutler, her right-hand man, agrees with her and adds, “In the church sometimes you find that way of singing. They got blues in the church.”

Hard distinctions between the sacred and secular realms of life do not accurately describe Black life in America. And they may do a disservice to us all.

Ultimately, Ma understands that she has a vocation—a calling—out of herself and into the world. She understands, in ways Levee cannot, what belongs to her and protects that interiority as an act of holiness. Levee needs the affirmations of others while he lacks patience and foresight. Ma demands their respect and some fairness. She is willing to walk away if the deal isn’t right. She understands what is at stake as clearly as does Søren Kierkegaard: “What is a poet? An unhappy man who hides deep anguish in his heart, but whose lips are so formed that when the sigh and cry pass through them, it sounds like lovely music.”

The blues that Ma sings gives voice and meaning to the aspects of life that ‘church folk’ don’t want to talk about in polite company.

One of the most consistent themes in Wilson’s Century Cycle can be summed up with a popular concept in Pan-African philosophies: sankofa. From the Akan language of modern Ghana, it means, “It is not taboo to go back and fetch what you forgot.” In Wilson’s stories many characters have lost a sense of connection to their past. They look upon it with some measure of shame. None do more than Levee: When he finally reveals his past to his bandmates, their eyes fill with compassion and fear.

God is as present in these powerful moments of revelation as grace could be in the most hard-won encounters of the sacrament of reconciliation. Levee just doesn’t know how to ask for healing; he only knows pain.

Ma Rainey’s Black Bottom gives us a window into the complexity of Black human living and takes theodicy seriously. Why does God allow us to suffer? No easy answers are given, but Ma’s response is essentially that of the ancestors Levee would just as soon forget:

The blues help you get out of bed in the morning. You get up knowing you ain’t alone. There’s something else in the world. Something’s been added by that song. This be an empty world without the blues. I take that emptiness and try to fill it up with something.

Ma, as a proxy for Wilson (an artist known for an uncompromising and singular vision not unlike hers), stands before the world as homo poetica, “man the meaning maker.” Wilson invites every audience member to go back and fetch the experience of Black American life in all its tragicomic beauty; to become witnesses to the painstaking, sacred work of reinvention; to turn rage into grace. God waits for us there, ready to teach us to sing poetry like Ma, without a façade.

Now I’m gonna show y’all my black bottomThey stay to see that danceWait until you see me do my big black bottomI’ll put you in a trance.

Eric T. Styles is the rector of Carroll Hall at the University of Notre Dame. He writes on theology, liturgy, culture, and the performing arts. He is a collaborator with Afro House, a music-driven performance art ensemble based in Baltimore.