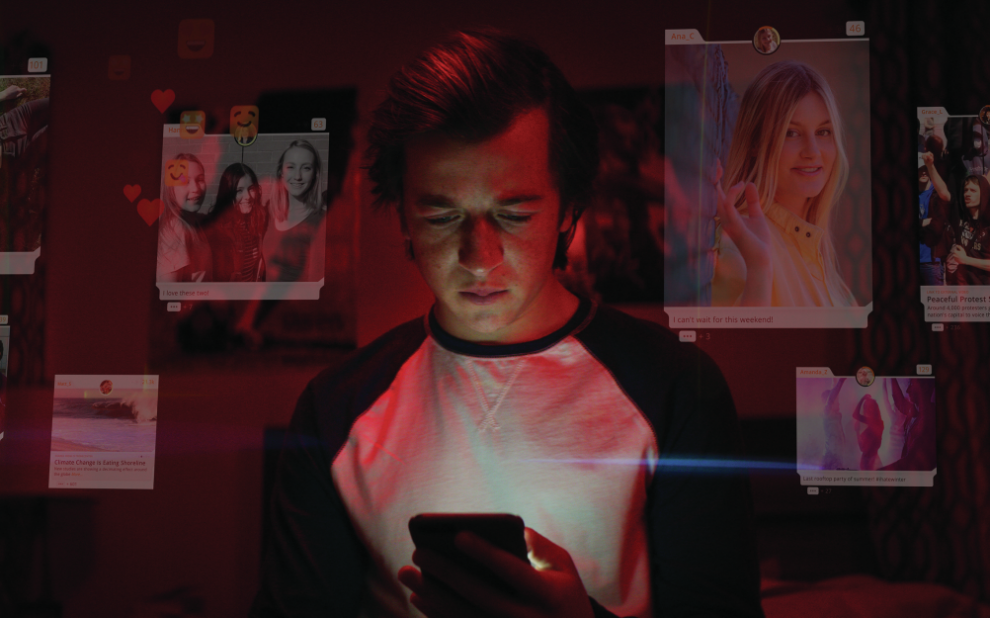 Recently, my wife and I watched the much-discussed Netflix documentary The Social Dilemma. It features a parade of Silicon Valley insiders making confessions of their sin in contributing to the addictive design of media now producing so many social ills. It’s hard to imagine anyone watching without being concerned. But it’s also hard to know what to do about it, especially for the rising generation of 20-somethings whose entire social experience is shaped by the smartphone.

Somehow this doesn’t feel like a documentary about the dangers of smoking or drugs—just don’t do it—or even about factory-farmed meat—just avoid it. How can we avoid being digitally connected? And what about all the undeniably positive things that social media connections contribute to our lives? Faced with such a social dilemma, we are tempted to let our uneasiness pass. Besides, what exactly is the issue here anyway? And does it have anything to do with the Catholic faith?

First and foremost, we really do need to pay attention. After all, Pope Francis writes presciently in Laudato Si’ (On Care for Our Common Home) that “technological products are not neutral” but instead end up “shaping social possibilities along the lines dictated by the interests of certain powerful groups.” He explains that decisions about technologies “are in reality decisions about the kind of society we want to build.”

The Social Dilemma demonstrates well the kind of society these technologies build: from the general distraction we all face, to the alarming increases in depression and suicide, to the algorithmically driven clickbait that feeds political polarization, to the loss of any possibility of socially shared standards of truth. Historic levels of mental illness among the young, political differences starting to spiral into violence, the ability to systematically deceive large numbers of people—it’s hard to think we’d accept any product on the market if these were the known side effects. Notice too: Many Catholic social concerns—for the poor, for humane immigration policies, for the environment—are all downstream from this. We need strong, committed, cooperative citizens to solve any of these challenges.

But what is the root of the problem? Well, ironically, what we need to pay attention to most is attention itself. Attention is not a flashy moral issue. In fact, we are apt to forget that attention names a moral act and a habit of acting that shapes pretty much everything else we do. Attention is the gateway choice that shapes all our other choices. As the neuropsychologist Merlin Donald notes in his history of the conscious mind, the ability to selectively bind our minds to particular objects and to keep focus on the object amid a flood of other sensations is the most foundational characteristic of the human mind.

Investigative journalist Maggie Jackson names attention the “building block of intimacy, wisdom, and cultural progress.” Her book Distracted (Prometheus Books) explains all the human capacities neuroscientists have rooted in attention. Attention affects everything, from momentary impulse control to how we make “ultimate sense of the world.” In 2008, a year after the introduction of the iPhone, she worried information technology was driving us into a “dark age.”

What matters from a Catholic perspective is what you believe about other people based on what you are fed by the platforms.

As The Social Dilemma makes clear, the smartphone-enabled ability to continuously control and direct our attention is the key way social media companies make money. The typical claim we hear is: If a product is free, then the real product a company is selling is you. But it is worse than that: The real product being sold is control of your future behavior—of what you will find and respond to on search engines and in your social media scrolls. To use author Tim Wu’s phrase, these “attention merchants,” rather than charge you admission to their site, instead charge others for the privilege of using your attention. The more you use an app, the more of your attention the app can sell to others so they can (seemingly magically) show up and give you some piece of information or tweak your passions with an arresting image or outrageous headline.

Yet the moral significance of attention is not simply about maintaining some control over your own life and choices. Two other things should concern Catholics even more deeply. One is that the “attention merchants” are not simply trying to put their brand of laundry detergent in front of you; they are trying to get you to see other people and groups in a certain way. Catholic teaching about solidarity and the common good ultimately rests on our commitment to see everyone as a potential partner with inherent dignity.

Of course, it could be possible to design algorithms that would tend toward such an end. But political consultants will tell you a truth they’ve long known: Everyone hates negative campaign ads, yet such negative ads continue because they are very effective. Convincing someone that the other side or group is “bad” turns out to be a great way not only to grab our attention but also to mobilize our action.

The manipulation of your perception of other people is rendered extraordinarily easy and effective by social media platforms because of how customized these feeds can become, pressing just the right buttons to affect you. You know that ad about a new vacuum cleaner that follows you around on websites because you searched for vacuum cleaners two months ago? Not a big deal. What matters from a Catholic perspective is what you believe about other people based on what you are fed by the platforms.

The other concern about attention is that there are so many gospel stories in which Jesus urges his followers to pay attention to the right things. The gospel requires vigilant attention, because God really is always acting in our lives. But attention is also required because of how Jesus redirects our attention away from human rules, fame, economic security, ethnic divisions, and past misdeeds and toward the needs of the person in front of us, particularly their suffering.

There are so many gospel stories in which Jesus urges his followers to pay attention to the right things.

This whole way of living depends on grace, on a transformative rising above the pervasive sinful tendencies to attend to the wrong things—most importantly, ourselves. Jesus famously chides the apostles when they argue over “which one of them was the greatest” (Luke 9:46)—a salutary reminder of the effects of measuring our worth in terms of “likes” and followers. To follow the gospel really and truly, we can’t be distracted by all these things. We must focus on the one thing necessary: Jesus and what he invites us to see and respond to in our daily lives.

Could there be an app for that? Well, maybe. But it might not be very popular or profitable. It might just remind us every hour or so: Are you looking at the world through Jesus’ eyes? Are you seeing the ways God’s will can be done here and now? At the very least, we might ask: Is what we consume on social media really assisting us in doing that? Or is it directing our attention against that will?