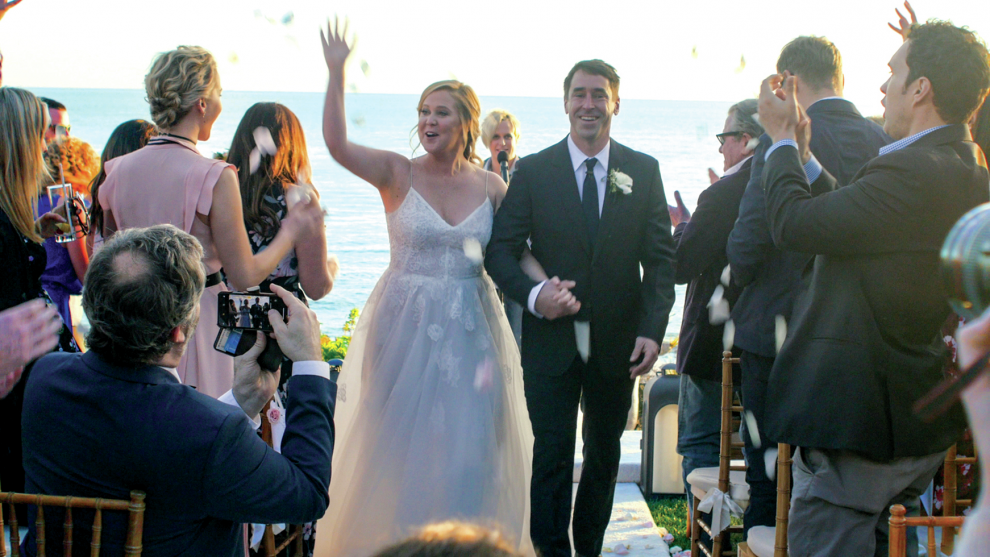 An HBO Max three-part docuseries, Expecting Amy, and the final season of the award-winning and oft-Emmy-nominated Schitt’s Creek (a Canadian Broadcasting Corporation sitcom on Netflix in the United States) deliver plenty of laughs—and compelling, transformative views into what family means. They are brilliant.

Expecting Amy is a behind-the-scenes docuseries of comedian (and actress, producer, writer, and director—she seems able to do everything) Amy Schumer’s life on the road as she develops new material for her 2019 Netflix special, Growing. While she rehearses, shuttles to and from hotels and venues, and cuts deals on her cell phone, she also struggles with a truly crummy pregnancy.

Suffering from hyperemesis gravidarum—near-constant nausea—she carries on interviews while holding a barf bag, rides in a limo looking green around the gills, and shoots entire scenes sitting on the floors of hotel bathrooms. This is reality TV that is actually about reality. It is distressing to witness and mesmerizingly intimate.

For a celebrity, Schumer makes rare and brave choices. Makeup-free, puffy-eyed, hair up in a sloppy bun, she shuffles in and out of the hospital looking miserable. Her experience makes a good case that mothers ought to earn merit badges for getting through three trimesters.

She is also happily, wonderfully in love. Her husband since 2018, chef Chris Fischer, is diagnosed on camera as having mild Asperger’s. It’s an emotional moment, and the video is unflinching about their reactions. Diagnosis notwithstanding, Fischer’s ability to be relational and loving under stress puts most men to shame. He is loyal and attentive to her, a 10 out of 10. Well chosen, Amy.

Schumer and Fischer are clearly best friends and do not walk on eggshells around each other. As her Netflix special taping date approaches, tensions rise over her stand-up content that discusses their marital life. Fischer thinks some of it might sound mean. Schumer is shocked and saddened. What ensues is a relationship master class in how to listen, disagree, be curious about each other, and reconnect with tenderness. Theirs is an enviable marriage.

Perhaps the family’s most defining characteristic, rather than being magical, is its relentless realness.

They both star in the Food Network’s Amy Schumer Learns to Cook, and she’s slated for a new comedy series for Hulu. For her previous series, Inside Amy Schumer, Schumer was nominated for 12 Primetime Emmys and won three. Expecting Amy ought to be on this year’s list.

Schitt’s Creek is not reality television at all, though it has roots in it. Actor Dan Levy, inspired by American reality shows about rich people, pitched a show to his father, the inimitable Eugene Levy, about a family falling from its celebrity-studded lifestyle heights to living in a tacky roadside motel. They play father and son in the series.

The show enjoys a cult fanbase and has earned multiple Emmy awards and Screen Actors Guild and Critics’ Choice award nominations, three ACTRA Awards, and 24 Canadian Screen Awards. The cast is impeccable (Catherine O’Hara is priceless) and the haute couture wardrobe is an outrageous character unto itself.

Schitt’s Creek began in part as a comedic exploration of class but became beloved for its warm, human representations of LGBTQ characters and a love interest storyline that emerges between two of them. Patrick and David meet, fall in love, and wed in the kind of small town so often stereotyped as being intolerant, tone-deaf, and homophobic. Except this one isn’t. There are no offensive rednecks or sanctimonious speeches about tolerance (a double-edged term that labels something as so inferior it needs to be tolerated). Instead, Patrick woos David with a town pub talent night serenade that rivals any big screen “You had me at hello”-type moment. As David listens, shy and a bit awed by Patrick’s declarations, Moira touches his arm with affection and recognition—a mother delighted to see that her son is deeply loved.

These two series let us see into the lives of families that know how to love one another and do it fiercely.

In film and television plots, if there’s a romantic tale to be told, it happens to the heterosexuals. Characters drawn from marginalized communities are usually slated to die first, be the villains, or become trapped in the tragedy of their own identities. Schitt’s Creek just gets on with telling the story of a family living in a town of civil and kind people. Imagine that.

Don’t miss the minidocumentary Best Wishes, Warmest Regards: A Schitt’s Creek Farewell, also on Netflix. Among background stories and engaging interviews, there’s a script read-through in which a teary cast shares a letter from the mothers of LGBTQ children, thanking the show for how it has helped their children imagine happy, loved lives for themselves.

Families are not magical fairy lands. Sometimes they nurture us, sometimes they don’t. Sometimes we must assemble the family we need out of friends, critters, and books. Perhaps the family’s most defining characteristic, rather than being magical, is its relentless realness. These are, after all, the people who know what you look like when you’ve been crying, where you keep your secret chocolate stash, and how your digestion is doing.

These two series let us see into the lives of families that know how to love one another and do it fiercely. Warts and all.