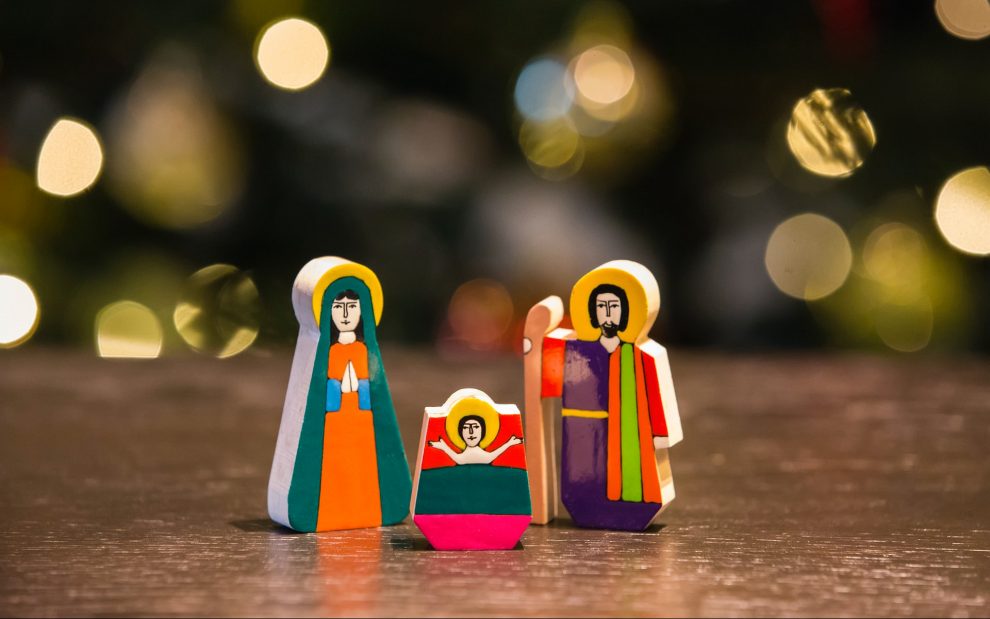 Perhaps no tradition fills us with as many pleasant memories as the Christmas nativity scene. Times of wonder and joy come alive when we remember the details of shepherds and kings, oxen and hay, Joseph and Mary, all gathered around the infant lying peacefully on a manger.

Yet here is a mystery. The nativity scene is actually a profoundly disturbing image filled with absurdities. How can such a disturbing and absurd collection of characters bring peace to our hearts?

What is peaceful about the sight of a newborn lying in a feeding trough for cattle? What is reassuring about shepherds, the homeless of Jesus’ day, sleeping outside with the sheep, standing closer than is comfortable to the isolated and defenseless Joseph and Mary? What can be more absurd than that in front of the feeding trough three kings in fine raiment kneel, outstretched arms offering luxurious and expensive gifts of gold, frankincense, and myrrh to the refugee child inside?

Nonetheless, not only we have but the church throughout the centuries has recognized the native scene as the site of great Christian joy second only to Easter.

The nativity scene, the visual representation of Jesus’ birth, may be one of the oldest examples of popular Catholicism. Based, in part, on the scriptural infancy narratives (Luke 2:7–20; Matt. 1:18–2:23), the history of the nativity scene as popular Catholicism, the praesepe tradition, begins at a cave-like grotto alleged to be Jesus’ actual birthplace. Origen, in the third century, alludes to the grotto as the center of pious devotion. It was and remains a site of pilgrimage.

In 354 Pope Liberius established the Nativity as a special feast on December 25 to distinguish it from Epiphany. Liberius dedicated a basilica in Rome, eventually known as Sancta Maria ad Praesepe, entirely for this new feast. In the seventh century the relics of what was believed to be the true manger were brought to this church. Pope Gregory III (731–741) placed the relics in a side chapel and added the figures of Mary and the child.

What is peaceful about the sight of a newborn lying in a feeding trough for cattle?

At this point and interesting transformation takes place that reveals the genius of popular Catholicism. The relics of wooden boards from Jesus’ actual manger were displayed not in the usual manner of a reliquary but were actually put together in the form of a manger. This manger-reliquary became the altar where the pope put the consecrated host on Christmas Eve. Others imitated this liturgical (and popular) act, and soon other churches placed the actual figure of the child Jesus within the manger.

Perhaps the most dramatic development in this curious mix of popular Catholicism and high liturgy took place in the Middle Ages through the influence of St. Francis of Assisi.

In the year 1223, Francis received papal permission to erect at Greccio a manger scene at which he placed a live ox and donkey. The nativity Mass itself was celebrated over the manger. The impact of this nativity scene must have been great. A certain John of Greccio, for example, claimed to have seen a child sleeping on the manger who woke at the sound of Francis’ voice and embraced him. The hay from that manger was later credited with miraculous cures of animals.

The visual representation of Jesus’ birth in the nativity scene reveals a compact cosmology. Shepherds (human creatures) tending their sheep (animal creatures) hear angels (angelic creatures) singing in the heavens while the newborn child lies atop a manager filled with hay (vegetative creatures) down on Earth.

The nativity scene, the visual representation of Jesus’ birth, may be one of the oldest examples of popular Catholicism.

Meanwhile, three magi representing the three major nations of the known world, Europe Asia, and Africa (cultural creatures) follow a star (cosmic creature). The nativity scene deliberately and self-consciously brings together a Christian cosmic universe, the visible and the invisible, in a visual mosaic of the incarnation.

The hay is not only food for the animals but also a symbol for the spiritual food of the Eucharist. Indeed, the nativity scene’s great mystery concerns its revelation that we are all creatures of God. As such, it is truly an apocalypse, which, in Greek, means “revelation.” It reminds us of the great prophecy of the prophecy Isaiah (11:6), that the day shall come when the wolf and the lamb shall lie down together.

In the nativity scene, it is not so much wolves and lambs but kings and shepherds. The nativity scene makes present a time when rich and poor alike will have cause to celebrate together.

The nativity scene deliberately brings together the visible and the invisible in a visual mosaic of the incarnation.

Yet, the nativity scene is so much more. For not only the rich and the poor shall know joy but also the stars and the angels, the oxen and the donkey, and, even, they hay shall know that they were chosen to mediate the Body of Christ.

It is this mystery that fills us with emotion, that moves our hearts to rest, as St. Augustine said, toward the sight of God.

This article originally appeared in the December 1998 issue of U.S. Catholic (Vol. 63, No. 12). Click here to subscribe to the magazine.

Alex García-Rivera was a professor of theology at the Jesuit School of Theology in Berkeley, California. He passed away in 2010.