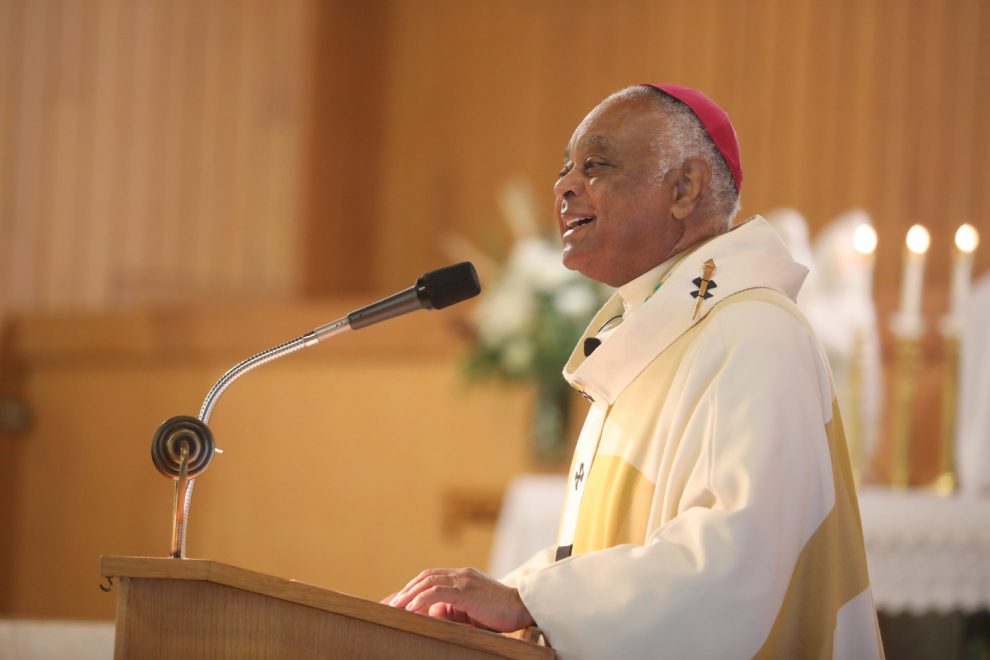 America, there is cause for rejoicing. Black Catholics in America, there is a reason to “Lift Every Voice and Sing.”  On Sunday, October 25, Pope Francis appointed Archbishop Wilton Gregory, the archbishop of Washington, as one of 13 new cardinals.

As a Black Catholic, I could not be happier. In this gesture, Pope Francis acts for justice, peace, reconciliation, and healing. He lives out his commitment to, as he has said, pray for healing and to stand up against the “sin of racism.”

Today, when our country is grappling with the racial injustice that has been growing in our midst for more than 400 hundred years, this announcement from the Holy See could not be more appropriate. As Americans, we must celebrate the fact that Pope Francis is listening and watching: He is standing with Black Catholics, who are suffering. As a shepherd, he never leaves his flock behind.

This past summer, after George Floyd’s death, Pope Francis reminded us that “we cannot close our eyes to any form of racism or exclusion, while pretending to defend the sacredness of every human life.” Archbishop Gregory’s elevation indicates that Pope Francis not only believes that Black Lives Matter is a pro-life concern but also that as Catholics we have a spiritual, moral obligation to stand up for justice for all Black people.

Born in Chicago in 1947, Archbishop Gregory attended a parochial grammar school in Chicago, St. Carthage, and at the age of 11, realizing that he wanted to be a priest, he went to Niles College, which until last year was St. Joseph Seminary. He attended classes at Loyola University Chicago and St. Mary’s. After Bishop Gregory was ordained as a priest on May 9, 1973, he continued his studies. In 1980 he earned a doctorate in sacred liturgy at Sant ’Anselmo in Rome.

As Americans, we must celebrate the fact that Pope Francis is listening and watching: He is standing with Black Catholics, who are suffering.

Shortly after his return to the United States in December 1982, Cardinal Joseph Bernardin ordained him as auxiliary bishop of Chicago. His work in this large Midwestern Catholic city led him to become the first Black bishop of Belleville, Illinois in February 1994. Bishop Gregory became the first African American president of the United States Conference of Catholic Bishops, a position he held from 1998 to 2001. Later, he was appointed archbishop of Atlanta by St. Pope John Paul II, and in 2019, under the ordinance of Pope Francis, he moved to Washington, D.C.

Now, for the first time ever, it is likely that a Black American will have a voice in selecting a pope.

Many will recognize the new cardinal for his keenness in handling the sexual abuse crisis in the Catholic Church. From 2001 to 2004, as the president of the USCCB, he introduced a “zero-tolerance” policy for all priests guilty of the sexual abuse of minors. His efforts helped to considerably reduce child sex abuse cases in the U.S Catholic church.

When addressing both the legacy of sexual abuse in the church, the archbishop has never stopped working for justice and unity. In September 2003, Gregory said, “The healing of the church in Boston [has begun], it was the epicenter, although not the only place where difficulties came to public attention . . . will begin to reassure people that the church is capable of addressing these matters.”

Others will recognize Gregory for his sharpness in questioning racial justice. This past June, he made headlines for his position against the Knights of Columbus, who own the John Paul II shrine in Washington D.C., due to their agreement to host President Donald Trump in a time of tumult. His statement on this occasion read, “I find it baffling and reprehensible that any Catholic facility would allow itself to be so egregiously misused and manipulated in a fashion that violates our religious principles, which call us to defend the right of all people even those with whom we might disagree.”

Now, for the first time ever, it is likely that a Black American will have a voice in selecting a pope.

This visit came the day after the president ordered the use of tear gas on peaceful protesters near White House. This intervention did not escape the Archbishop of Washington’s notice, who stated, “The horror of George Floyd’s death, like all acts of racism, hurts all of us in the Body of Christ since we are each made in the image and the likeness of God, and deserve the dignity that comes with that existence.”

During the pandemic, Archbishop Gregory contrasted our silence on racism with the deadly COVID-19 virus that is slowly decimating our population: “Comparing the ongoing coronavirus pandemic to racism, it is a ‘good image’ to remind us that there are things that impact lives that come in silence. The questions about the virus are the same we need to ask about racism,” he said. “How is this silent but deadly virus passed on to other people? Is it learned at home? It is transmitted through our [infrastructure]? How can we render it ineffective?”

This frenzied election season, many of us have forgotten to stand against the sin of racism in the Catholic Church. Never before has our Catholic Church felt so divided among strict lines: pro-life versus pro-choice, Fox News versus CNN, Democrat versus Republican. The elevation of Cardinal Gregory is a message of unity.

As Archbishop Gregory said last August in Washington, at the 57-year anniversary of Martin Luther King Jr.’s “I Have a Dream” speech, “We are at a pivotal juncture in our country’s struggles for racial justice and national harmony.”

The elevation of Cardinal Gregory is a message of unity.

While recalling King’s march for racial justice, Archbishop Gregory celebrated “the task and the privilege of advancing the goal that was so eloquently expressed 57 years ago by such distinguished voices on that day.” He also stated that “men and women, young and old, people of every racial and ethnic background are needed in this effort for the healing of our country.”

Archbishop Gregory’s elevation to cardinal is a call for action for racial healing in our land. As he has said, “This history provides the context for us today and should act to animate our prayers, thoughts and actions for an end, finally to the sin of racism that remains with us and in us.”

While being interviewed in a “Theology on Tap” podcast in the archdiocese of Baltimore, Bishop Gregory said to a young Catholic, “You cannot be Catholic and sit on the sidelines.” He continued, “To be a member of the church, you have got to go in and get your hands dirty in the mix of the whole arena of faith, from what we believe and profess to how we live and treat one another. Especially on racism.”

America, today we are invited to live with an audacity of hope, to love one another, to never despair, and to maintain a spiritual aspiration to fight for justice. Archbishop Gregory’s elevation to the rank of cardinal is a message of unity that confirms the Black Lives Matter movement is a pro-life one. With this gesture, Pope Francis invites us to believe in hope. America, there is cause for rejoicing here.

Patrick Saint-Jean, S.J. is a native of Haiti and a member of the Midwest Province of the Society of Jesus. He currently teaches psychology at Creighton University in Omaha, Nebraska. He is the author of The Spiritual Work of Racial Justice: A Month of Meditation with Ignatius of Loyola (Anamchara Books, forthcoming).