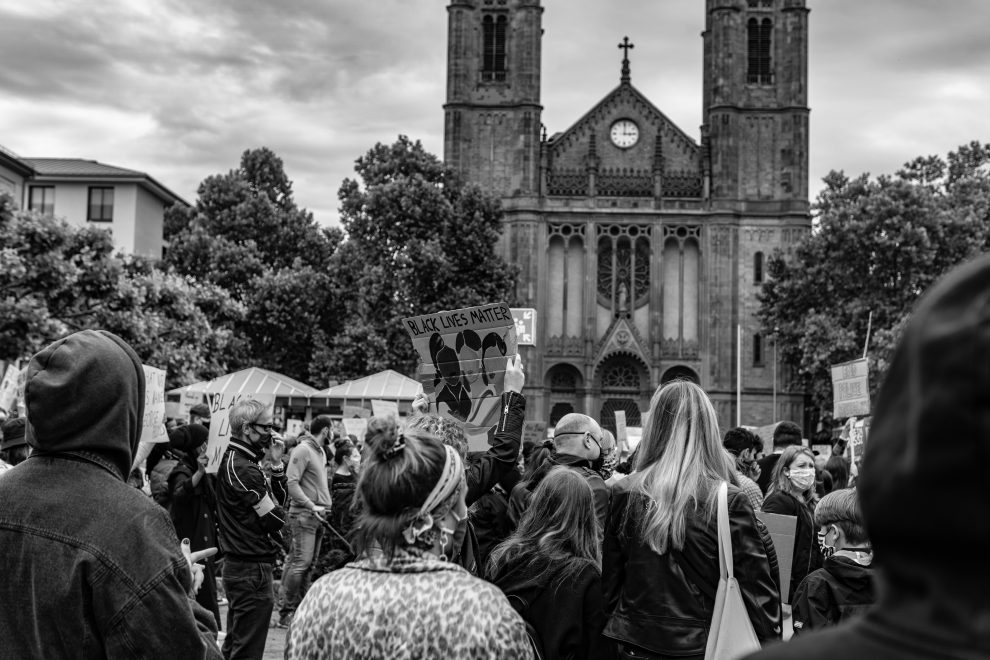 In King’s speech, he contrasts physical lynching—a specific and brutal method that mobs in the South used to kill people, particularly Black Americans—with what he calls spiritual and economic lynching. This latter can be seen as “othering,” creating a narrative of “us vs. them” to separate Black Americans from white ones.

From the long-lasting and far-reaching dominance of the Roman Empire to the misadventures of Christopher Columbus and beyond, to the violence against Black Christians up to the mid-1900s, Catholics have been involved in perpetuating both physical and spiritual lynching.

In 1492, Christopher Columbus “discovered” the “New World” with the support of the church. When he arrived in this new land, he enslaved and killed the natives—the tainos. The rise of the slave trade saw people forcefully brought from Africa and sold, mistreated, and killed, often in the name of the Christian faith.

Such atrocities were often supported by the church. For example, in 1452 a papal bull titled Dum Diversas gave the Portuguese authority to “invade, capture, vanquish, and subdue all Saracens, pagans, and other enemies of Christ, to put them into perpetual slavery, and to take away all their possessions and property.” Other papal bulls followed with similar messages: Together they form what is now known as the “Doctrine of Discovery,” or church teaching that “established a spiritual, political, and legal justification for colonization and seizure of land not inhabited by Christians,” according to the Upstander Project.

The Catholic Church and Pope Leo XIII denounced slavery in 1890, yet Black people had to wait until 1965 to see this condemnation in an official church document: Gaudium et Spes (The Pastoral Constitution on the Church in the Modern World).

In other words, for over 400 years, Catholics kept the fires of division burning. Black people used to be beaten and raped. They used to have their children stolen. I may not be subject to these inhumanities as a Black Catholic today, yet sometimes I feel victim to them.

Today, lynching takes a new form in America and is characterized by many Catholics’ complacency and implicit participation in an unjust system that upholds white privilege. I have experienced this othering even within the church: There remain divisions between Black, brown, and white Catholics today. As Thomas Merton stated eloquently in his 1963 “Letter to a White Liberal,” “White society has sinned in many ways. It has betrayed Christ by its injustices to races it considered ‘inferior’ and to countries which are colonized.”

The Catholic Church and Pope Leo XIII denounced slavery in 1890, yet Black people had to wait until 1965 to see this condemnation in an official church document: Gaudium et Spes.

In my own parish, I often feel as if I am left out or seen as an “other.” For example, during social hour at a predominantly white parish, I once got in a conversation with one of my white sisters about worship music, and I mentioned my appreciation for a certain type of song at Mass. The woman then insisted that I did not truly belong to the parish if I did not like a particular song.

As a Black man, I do not always feel comfortable arguing in these situations. Sometimes I feel as if it is in my best interest to be silent and that to do otherwise would only reinforce the sense that I do not belong.

Another example is the popular hymn “Amazing Grace.” Nearly all Catholics know the song by heart, yet few know the story behind the lyrics: Composer John Newton was a slave trader, an oppressor of human beings. While Newton eventually renounced the slave trade and became an abolitionist, he did not do so until 16 years after “Amazing Grace” was published. Every time I hear the lyrics I am reminded of this fact.

The slow butchering of social justice in the spirit of “otherness” is real in the Catholic Church.  “Otherness” forces some Catholics in America to see Christ only as white. As a Black Jesuit, I sometimes have a sense that some of my white brothers and sisters have forgotten that Black people are human too. This experience causes trauma, not just to myself but to all Black Catholics. There is a trauma caused by enduring and witnessing brutality against Black Catholics, as if we were not part of the body of Christ.

In my own parish, I often feel as if I am left out or seen as an “other.”

As an American Catholic, these examples create a mounting feeling of cognitive dissonance: Am I more American than Catholic? Or am I more Catholic than American? To what degree is my silent participation in the lynching of my black Brothers and Sisters affecting my prayer life?

It is time to have a prophetic but uncomfortable conversation with our leaders about working to heal the injustices of the Catholic Church. As James Baldwin said, “Precisely at the point when you begin to develop a spiritual conscience, you must find yourself at war with your [church].”

Pope Paul VI, in the opening session of Vatican II, clearly spelled out the need for conversion and asked God for the grace of unity. In the spirit of his prayer, it is time for Catholics to pray for an end to the sin of “otherness” that killed George Floyd and many others, the sins that have sparked recent protests in America.

Such prayer is a call for all American Catholics to examine their own consciousnesses and to address some deep questions regarding our Christian identities. We are going through a period of systemic spiritual transformation in America. Do we see ourselves in this transformation?

Many of us who have been part of maintaining the system of racism are willing to listen. However, are we willing to go further?

This is a moment in the life of the church that historians will write about. How do we want to be presented in their works? How do we want to respond to our vocation of laboring with Christ by working for justice for the oppressed?

The “otherness” in our church challenges all of us to make a racial spiritual self-evaluation of the role we play in our society and to reflect on our relationship with the Christ of unity.

There is a trauma caused by enduring and witnessing brutality against Black Catholics, as if we were not part of the body of Christ.

As we pronounce in the creed, “We believe in one God”: Unity is one of the greatest graces against this social sin in our midst. As Pope Francis eloquently articulated in his homily for the feast of St. Peter and St. Paul this year, “We today can ask ourselves: Are we protecting our unity with prayer, our unity of the Church? Are we praying for one another?” The Holy Father went on to say, “now, as then, so many closed doors would be open, so many chains that bind would be broken, and we would be amazed.”

The time is now. We must work with Christ to heal our division and help people find justice. As philosopher Cornel West wrote, “Justice is what love looks like in public.” Black people in the Church need justice in this fight against “otherness.”

If you are a Catholic in America today, this is your chance. History is offering you an opportunity for conversion and unity. Our identity comes from the theological aspect of the sacrament: We are all one in Christ.

The history of “otherness” in the church as a spiritual lynching is part of our painful historical memory, yet it is also an opportunity for conversion, healing, reconciliation, and a true Christian unity.

We can share Dr. King’s dream. This is our time.