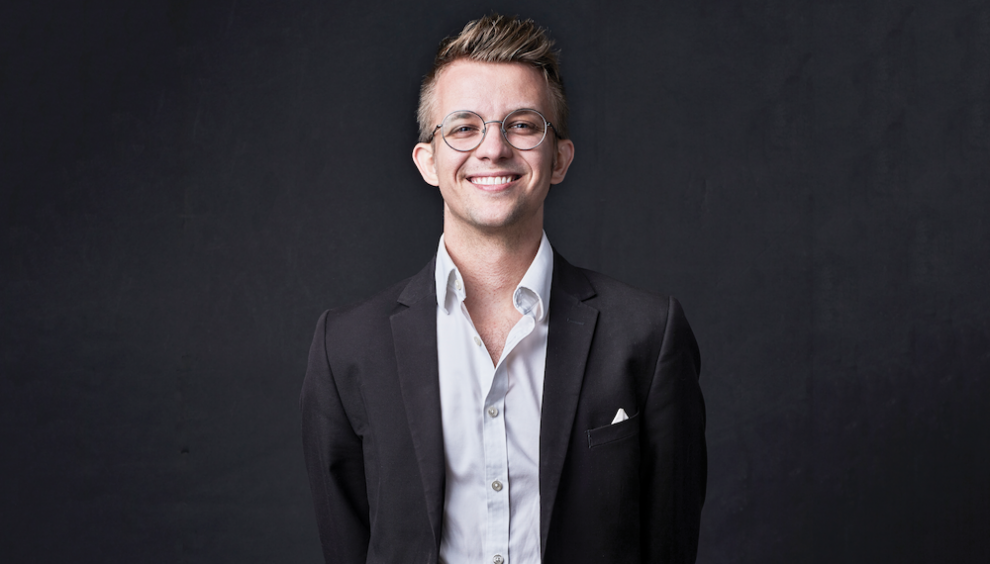 “You should probably sit down for this.”

A teenage Sebastian Agignoae had stumbled across a confusing document from the United Nations High Commissioner for Refugees in his family’s security box. When he approached his parents about the mysterious item, his father thought it was time to fill in his son about their personal journey.

“[My dad] then revealed how, fearing execution, he escaped Romania at the height of the communist regime. He lost his mom and separated from his family during this plight. Escaping to Yugoslavia, he later came to Chicago where he met my mom, a Polish immigrant, on the dance floor,” says Agignoae, now 25. “Suddenly, I no longer looked at him as a hard, Eastern European man but as an individual with a story of tragedy and resilience.”

One of six children, Agignoae grew up in Crystal Lake, Illinois, 50 miles northwest of Chicago, where at his mother’s insistence he began taking piano lessons, though it was a financial strain. Unknowingly, Agignoae was getting his first lesson in the transformative power of music.

“My mom was adamant about wanting her kids to play the piano, so she took on another babysitting job. With that, I started playing piano in first grade when I was about 6 years old. As soon as the growing pains subsided, I learned to love the instrument,” says Agignoae. In high school, Agignoae started playing for his local Catholic church and continued following his musical passion while attending Loyola University Chicago, keeping very active in the university’s music ministry program.

While music remained an important part of his life, Agignoae turned his studies and attention to science, specifically biochemistry. “The plan was to work for a science degree, pursue medical school, and become a doctor. God had something else in store for me,” he says.

Agignoae recognized that the direction he was heading was about to take a turn. The global refugee crisis was reaching a critical, unmitigated precedent. Remembering his own father’s story, the recent college grad wondered how he could use his talents and motivations to serve those in need. A personally spiritual experience brought his mission into sharp focus.

“[One day] I went to the Art Institute of Chicago and came across Marc Chagall’s White Crucifixion, a painting representing the suffering of Jesus and the Jewish people. The scene next to Jesus’ crucifix resembled what I thought to be a boatful of refugees fleeing across the Mediterranean,” he says. “Suddenly, a voice so strong and present whispered to me, ‘Give it to the refugees.’ Struck with fear, I looked around me to discover that I was the only person in the room. I knew exactly what [God] meant. Credit for this initiative goes to God. If it’s [God’s] will, let it be done.”

Agignoae turned to his lifelong comfort and companion—music—and fused his passion with his family’s story and the global humanitarian crisis to found the International Orchestra of Refugees (IOR), whose mission is to empower displaced musicians to become musical ambassadors of peace.

“Colossians [1:17] reads, ‘He himself is before all things, and in him all things hold together.’ Music has always, in my eyes, been an ambassador of peace that’s meant to be shared with others,” Agignoae says. “I am the son of a refugee, and it’s the refugee people I will serve.”

Officially started in 2017, IOR may still be a young organization, but it has been making important strides in the global justice community.

“Our world is buckled under the worst refugee crisis since World War II, where less than 1 percent of refugees are resettled into a third country. The refugee crisis is one of the most pressing public challenges we are facing today,” Agignoae says. “IOR envisions identifying and empowering talented refugee musicians to connect and use orchestral music to create opportunities to prosper.”

How? By raising public awareness of refugees and providing support and career advancement opportunities for refugee musicians. Agignoae, IOR’s board of directors, and a handful of dedicated employees are constantly using their skills and connections to broaden the scope and reach of their message. They help whomever they can, however they can.

“We believe music can treat the cause and not the symptom,” Agignoae says. “Through [the IOR], we empower displaced musicians to become stronger and more confident in controlling one’s life and claiming one’s rights. The IOR is designed to creatively generate sustainable opportunities that allow people to move from a state of oppression to a state of purpose and freedom, allowing refugees to prosper, not just survive.”

One flourishing idea is a digital database of displaced musicians that helps people from around the world connect, find work and opportunities, and, most importantly, become part of a community—a bit of solace in a most tumultuous time in their lives.

Exceptionally bright, humble, and extremely busy, Agignoae juggles the nonprofit workload while continuing his studies. He is currently a member of the Harvard Innovation Labs’ Venture Incubation Program, which provides comprehensive resources and programming support accompanied by a network of highly curated advisors and mentors. Through this program, Agignoae and his team can propel their mission and strategic plan with a focus on developing stage two: the virtual orchestra.

“We are looking into all musicians having a detailed media profile complete with audio and visual recording that, when put together, will produce an interactive orchestra with musicians from around the globe playing the same song,” Agignoae adds. “In major metropolitan cities, we are exploring developing satellite ensemble groups, connecting them with their respective city’s symphonic orchestra.”

Agignoae hopes that IOR will not only connect displaced musicians to one another and future opportunities but also create footholds out of a refugee crisis and “embody hope and the strength of the human spirit.”

Admittedly, the global refugee crisis is a vast and complex—and sometimes daunting—issue, but Agignoae thinks of his own family, the people he has met and connected with, and the unlimited potential for music to ascend barriers to keep his motivation and tireless momentum. For Agignoae, there is no sitting down for this.