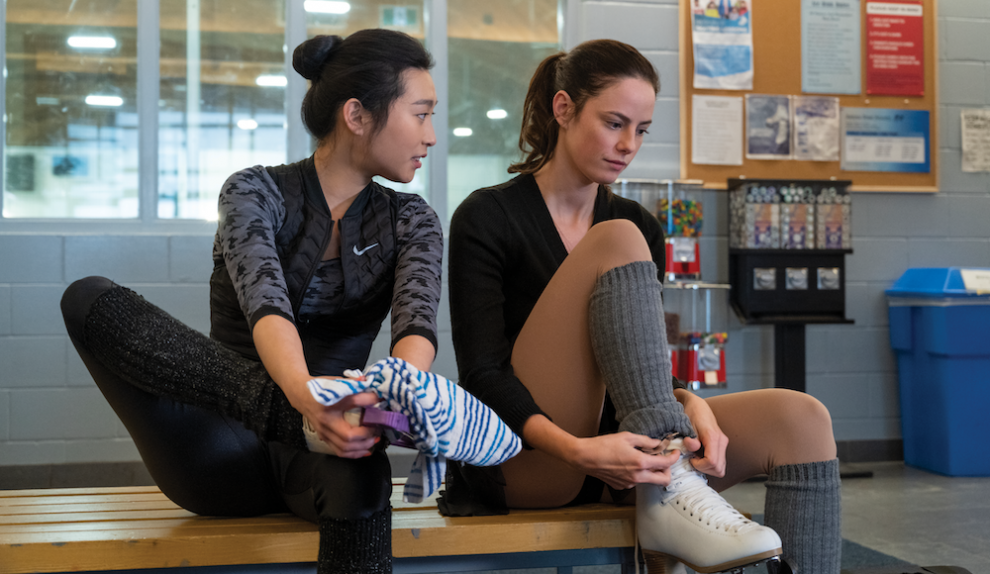 Behind the scenes in competitive ice skating, all is not sequins and sweetness in Netflix’s one-season wonder, Spinning Out. The series is compelling for unexpected reasons, and it takes uncommon risks in tackling a verboten topic.

Spinning Out sidesteps the glamour of the Winter Olympics fan-favorite competitions and fixes its gaze on the fact that these girls and young women are accomplished, elite athletes—and they didn’t get there by humming “Swan Lake” and wearing cute leotards. There are sweaty workouts and demanding drills from coaches, crack-of-dawn ice times in chilly arenas, and backstabbing mothers gossiping in the bleachers. Skaters fret about injuring tendons, bruising bones, and recovering from terrifying falls. The cruel destruction wreaked on young bodies is made clear and dramatic.

Skaters might look beautiful once they are costumed up and triple salchowing on the rink, but we don’t get to see as much of those polished images of performers as we might like. Mostly, we witness them at practice, bandaging blisters and old injuries, managing anxiety and panic through self-harm and drugs, and arguing with their mothers.

Here’s where the brave leap of the show occurs: Its title references not only revolutions on ice but also spinning out of rational and into unbalanced behavior while living with significant mental illness.

Kat (Kaya Scodelario) is a gifted singles skater trying to enter the pairs skating world despite being tormented by the memory of a devastating injury—and by her competitive, vindictive mother, Carol (January Jones), who suffers from bipolar disorder. Carol’s is a conflicted and complex take on motherhood: fiercely maternal on the upswing and dangerous as a shark on the down, willing to inflict emotionally mortal wounds on her own daughters. Kat’s sister, Serena (Willow Shields), also skates competitively. Single mother Carol struggles to keep the household running and her daughters outfitted with coaches, choreographers, and medical care. Some mental illnesses have a hereditary component, and Kat suffers from the same disease. Both mother and daughter struggle to deal with going on and off medications, trying and discarding therapy, and dealing with the consequences of having very public episodes and meltdowns.

Only some of these are due to illness. The pacing dawdles too long in melodramatic, romantic misunderstandings. How do they have time for this when everyone is getting ready for regionals?

Spinning Out makes two bold departures from media norms. One, it breaks with traditional representations of skating as an ultrafeminine stereotype of an ethereal, angelic ice princess who glides without effort, jumps without falling, and hits impossible standards without breaking a sweat. Figure skating was counted as a sport long before Title IX, but balletic grace and pretty costumes were praised and valued on Wide World of Sports over powerful muscles and relentless ambition for years. Not so here, where the sacrifices demanded by the sport are made painfully obvious, including predation from doctors and coaches, eating disorders, family budget-breaking expenses, and hellish schedules (someone is up early driving those kids to 5 a.m. practice!).

And two, Spinning Out goes right ahead and shows us what it’s like for children to live with mental illness at home. Telling the story of a mother with bipolar disorder is not a surefire audience draw. It makes for messy, punishing family dynamics and a depiction of motherhood that is far afield of June Cleaver. But it is a tale that deserves telling, because bipolar disorder is a lived experience for nearly 6 million Americans, many of whom were diagnosed as young adults. Admirably, Spinning Out does not excuse or coddle the bad behavior and destructive results that can accompany some mental illness. Rather, it looks them in the eye unflinchingly. This show is honest about a really hard topic.

Carol spikes to manic heights of maternal overinvolvement and housecleaning, then rages unreasonably at her daughters and sinks into despair. Kat prides herself on not being as out of control as her mother, but spirals into self-destructive episodes of her own. We see mental illness from both perspectives. As a daughter, Kat handles her mother’s illness with clarity, yet sometimes sidesteps facing her own.

The plotlines get clunky at times, but the writing often manages refreshing complexity in fully drawn, multifaceted characters. As Kat, Scodelario is evocative and powerful. Real-life skating champion Johnny Weir pops in now and then to be delightfully catty and make us wish they would turn the camera on him and just let him skate for a while. A cameo from Queer Eye’s Jonathan Van Ness is a hoot. There had to be a Russian skating coach in a fur coat, and yup, there is one, the elegant Svetlana Efremova. Amanda Zhou as an injured skater and best friend is smart and nuanced. Diversity exists in this fashionable Idaho ski town, although a plotline about an African American skier (Mitchell Edwards) is shallow and feels forced. Evan Roderick is underused as Kat’s partner, Justin, who is—surprise, surprise—a bad boy tamed by love. No worries. As good as he and his hair are, he’ll be back in another series any minute.

Expect profanity, drug use, and mothers behaving badly, but watching it alongside your mature teenager might spark meaningful conversation about real-life challenges and persistent, destructive stereotypes of mental illness—and about family life too, for that matter.

TagsCulture in Context Family Health and wellness TV and film