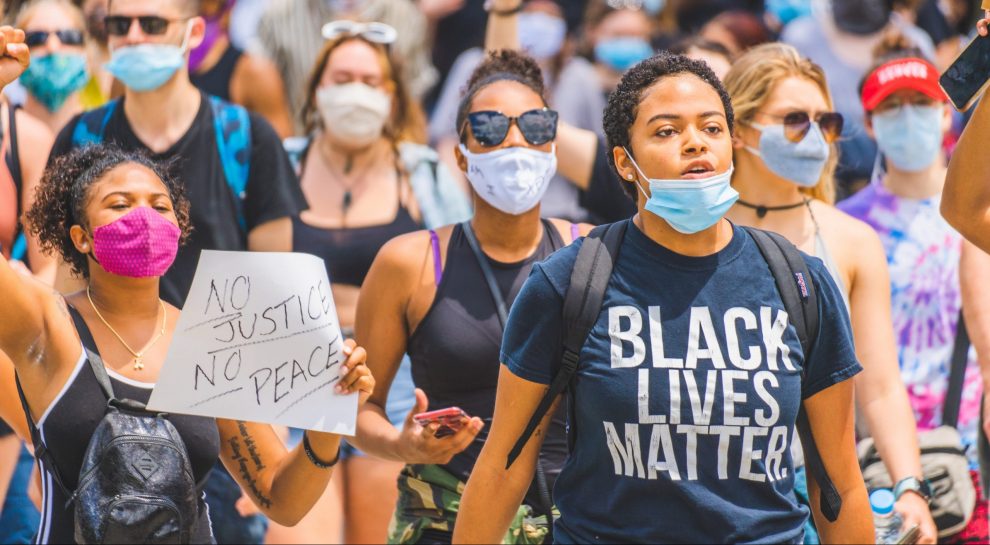 Thoughts and prayers—such is the typical response to tragedy in the United States of America. It is an especially common refrain after the death of innocents, almost always urged upon us by those who know that they have something to lose should a more fundamental challenge to the system arise.

And why not? For many people, prayer refers to something private, something silent. Catholics often think that prayer leads one further into oneself, not out into the world.

The occasion of Pentecost demands that we see things differently.

As the disciples huddled together in the upper room, they were unsure of their future. They knew tragedy: Those in power had recently killed their friend Jesus. And they knew hope as well when, miraculously, Jesus returned, only to leave them once more while promising cryptically that he still had “many things to say” (John 16:12).

Doubt and confusion beset the disciples, threatening to break their will and their fledgling sense of solidarity. No doubt they were angry, too, at their seeming abandonment. Their last question to Jesus still hung heavy in the air: “Lord, is this the time when you will restore the kingdom to Israel?” (Acts 1:6).

What shock they would have felt, then, when “suddenly” the Spirit was upon them—especially as it came not with a gentle rustle or in a soft hush, but as a “rush of a violent wind” and on “tongues, as of fire” (Acts 2:2–3). In this moment their group became a church, and their doubt turned to resolve.

This was not any abstract ecstasy: The Spirit charged each disciple with specific historical missions, the diversity of languages suggesting exactly where each was to go and preach (Acts 2:11).

The disciples would no longer mumble idle words, nor bite their tongues and stay silent: They would now speak boldly to the Parthians, the Medes, and the Elamites in words these peoples would understand. The Spirit sent them out from silence into the street.

Many people who pray for justice have followed the ongoing protests in practically every major city across the United States.

Initially begun in response to a white Mineapolis police officer’s vicious killing of an unarmed black man named George Floyd, the protests have blossomed into a full-fledged, nationwide indictment of a corrupt status quo. One in which those in power routinely murder Black people.

The President has denounced the protestors as “thugs” and threatened them with further violence at the hands of the state. But the mourners, the meek, and the righteous are already in the streets.

George Floyd is but the latest victim. The church and those in power have too often told people to stay home and pray; this is no longer an option, at least not as long as prayer means silence. People will be silent no longer. Now their prayers—for justice and for peace—are being heard with wind and fire.

To watch the video of police murdering George Floyd is to undergo a Pentecost summons. Like the disciples, we must choose whether to stay in the upper room, safe but silent, or to go out into the streets speaking clear words of mission.

Our first word must be no. No to a state apparatus that systematically targets black lives. No to violence as a tool of government. No to the widespread indifference of all those who value property more than life.

Those who cannot march can show solidarity in other ways, for instance by donating to bail funds, pressuring their political leaders, or by visiting those in prison. The Spirit inaugurates a variety of missions and speaks in many different tongues.

What the Spirit will not abide at this moment is indecision. Pentecost is a timely reminder that “faith without works is . . . dead” and that prayer without action is empty (James 2:26). To say this does not politicize the gospel but rather recognizes the cost of discipleship.

The ultimate challenge of Pentecost is not whether or not we stand on the side of all those who struggle for justice: Jesus has already unambiguously identified himself with such people.

Rather, what Pentecost asks is what we are willing to do in furtherance of this mission and where we are willing to go. This is the question the church must constantly ask itself if its witness is to remain credible in a country still very much governed by pervasive systems of racial violence.

There are important examples of nuns, priests, and countless laypeople visibly joining the current movement; but too many within the church hierarchy remain silent or speak in vague generalities—have they forgotten the mission their predecessors were given in the upper room?

To know where the Spirit is this Pentecost, and to have some indication of where it is leading us, we must learn to listen for the sound of that driving wind—and we must be willing to go where it leads.

Travis LaCouter studies theology at the University of Oxford.