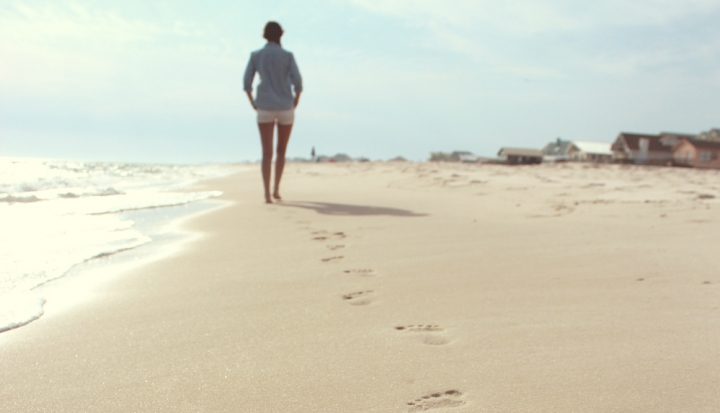 “Hey men, I say to you: whoever believes in me shall have everlasting life.”

These aren’t the words Jesus spoke in his Sermon on the Mount roughly 2,000 years ago, but they are the words I heard proclaimed from the pulpit two decades ago as my child self fidgeted her way through 60 minutes of Sunday Mass. Had I followed along with the readings in the paperback missalette rather than thumb-warring my younger brother, I would have seen the proper “Amen, I say to you.” Instead I spent the early years of my life believing Jesus had a casual, beach-bummy flair to his preaching and only taught men.

It’s not uncommon for children to mishear and misspeak habitually spoken words and phrases that are still fresh to their young vocabularies (in my family, remembered examples include pus-getti, maz-a-gine, and Ty-nol), and it’s also not uncommon for adults and children alike to use phrases without actually comprehending their meaning. For instance, I’ve overheard dozens of people make statements such as “He literally jumped eight feet in the air,” which, unless referring to an Olympic high jumper or a man on a trampoline, is likely inaccurate.

One phrase that puzzled me for the better part of my life is “I am humbled.” Although I’ve long had at least a vague notion of the virtue of humility, I most often heard the phrase “I am humbled” when people accepted awards, received gifts, or responded to praise. This didn’t make much sense to me. Pride and humility are opposites, I thought, and shouldn’t a person feel proud when earning acclamation?

My confusion over the phrase long outlasted my mispronunciation of the word magazine, and it wasn’t an intellectual explanation that eventually elucidated me. Instead I learned what it means to be humbled experientially, in moments when the phrase “I am humbled” came to mind without my conscious choice. Through specific encounters I have learned what it means to be humble, not just in isolated bursts but as a way of life, bringing shape to the command of the prophet Micah to walk humbly with our God.

As we sat squeezed into the back of the nuns’ compact sedan, my new friends and I—all spending two weeks with the Benedictine Sisters of Erie during an intensive summer program—shrieked with laughter as Sister Mary Ellen told us how she had to budget for months to pay off a recent speeding ticket. The ticket had exceeded her small monthly stipend, and no, she didn’t ask the Benedictines to foot the bill, and no, she didn’t pull out the “nun on a mission” card when the cop pulled her over. My friends and I thought she should have.

As her story wound down, Sister Mary Ellen pulled up to a roadside Dairy Queen a few blocks away from the Benedictines’ monastery. “My treat!” she gleefully exclaimed. We all cheered for ice cream, but I also felt a lurch inside. Here was a woman who had already given us so much—her time, her wisdom, her hospitality—and now she was about to lavish 20 percent of her monthly spending money on overpriced ice cream for a quartet of young women whom she barely knew. I was touched by her generosity, and I also felt discomfort. I was humbled.

The best wishes of an acquaintance

Besides the increased energy and returned appetite for foods other than toast, my second trimester of pregnancy brought the thrill of sharing exciting news with family and friends. It’s hard for me to imagine another phase of life in which I will receive such a condensed outpouring of affirmation, love, and joy.

Amidst the swell of support, an older acquaintance, someone who had heard of my pregnancy through the grapevine, reached out with this short email: “Just wanted to tell you how happy I am for you and your husband. It must be exciting, albeit scary, to know that a little one is on the way. We wanted children but it just didn’t happen—God has God’s reasons. . . . You will be a sweet, wonderful mom.”

Although I have faced my share of struggles in life so far, I have not suffered the unrequited longing for a child. Had that been my lot, it would have taken a tremendous amount of inner work for me to steer away from bitterness toward the acceptance that my acquaintance had displayed. She didn’t have to share her story or offer encouragement—she was only an acquaintance, after all—but she chose to extend herself in a way that lifted me up. I was humbled by it.

The enthusiasm of a volunteer

A large component of my job in parish faith formation is recruiting volunteers. Although I genuinely believe that people want to help, mustering the village of support needed is challenging, because between their careers, families, and other commitments (Coaching! Carpooling! Girl Scout troop leading!) people simply don’t have much time to give.

And yet without volunteers my parish’s programs would cease to function, so I embark on the humbling quest for catechists, chaperones, speakers, and facilitators over and over again. I try to avoid asking individuals whom I know have particularly demanding jobs or parents who bear the brunt of child care responsibilities. But still about half of my phone calls go unreturned, a quarter obtain a “no,” and a quarter receive a (typically reluctant) “yes.”

A few years ago I noticed the names of two siblings on my confirmation class roster, and knowing nothing about their family, I emailed the mom to ask for her help with the classes. Her nearly immediate response was unprecedented: “I would be honored. Thank you for asking me. When can we meet to talk more?”

Later I found out she works as a neonatologist and instructor at a prestigious medical school and is the primary caregiver of her two teens. Here was a woman being pulled in many directions, and she made me feel like I was giving her a gift by asking her to volunteer. It humbled me.

I am not worthy to receive you

When I think back on each of these experiences, the overwhelming feeling that stands out to me is of being undeserving. I didn’t deserve the generosity of a spunky Benedictine, the poignant kindness of an acquaintance, or the expansive enthusiasm of a busy parent. Even as I felt thankful, a part of me wanted to say to the giver: “No, stop! You shouldn’t do this. It’s too much!”

In many ways I resist this sense of undeservingness, and I know I’m not alone in my resistance. I’ll always remember a spiritual director of mine saying that she refuses to speak the part of the Mass uttered just before communion: “Lord, I am not worthy that you should enter under my roof; but only say the word, and my soul shall be healed.” We are children of God, loved by God, she said. We are worthy.

The way I understand it we deserve the things we have earned. By virtue of being human we have earned the right to be treated with respect, kindness, and love. But sometimes, people’s actions and words exceed the standard doses of goodwill. That’s not to say we shouldn’t receive extra (I’m no ascetic). But it is to say that more is precisely that: extra, unearned, given to us not because our actions or inherent worthiness have merited them, but because of the graciousness of the giver.

God’s presence fills creation, and we deserve to know God. But to be united with God physically through the Eucharist—that’s extra. To be shown respect by other people—say, a smile when we cross paths or a response to an email request—yes, I deserve this. But to be treated to a portion of a sister’s small stipend, written a deeply personal and generous note, or given large doses of time and good spirit—that’s extra.

Considering the extra calls to mind the Dayenu, a song more than 1,000 years old that is part of the Jewish holiday Passover. The Hebrew word dayenu roughly translates as “it would have been enough,” and the song expresses gratitude to God for taking the Jewish people out of slavery, feeding them manna in the desert, giving them the Torah, and more. Had God given even one of those things it would have been enough. But God kept giving.

The way I see it this song disrupts the notion of worthiness, focusing not on claiming what we deserve but instead on acknowledging that much of what we have been given goes above and beyond what “would have been enough.” It’s a song about receiving in gratitude, not earning through merit; about accepting with humility, not deserving through action.

At its heart, that’s what I think it means to be humbled—having a sense that had you not received something, what you already had would have been enough.

Being humbled can feel uncomfortable, because there’s a part of us—or me, at least—that wants to think we have earned what we’ve been given. We want things to be fair, and we certainly don’t like the feeling of owing anyone anything.

But if we can get over this resistance and allow ourselves to humbly accept more than enough, we open ourselves to both living in the warm glow of gratitude and a desire to extend generosity broadly. Being humbled is both a reminder that life isn’t meant to be lived tit for tat and an invitation to give to others that which they have not necessarily earned. When we live with a perennial sense of thankfulness for the graciousness of God and others, and a desire to extend the same goodness to the people whom we encounter, that’s when we move from moments of being humbled to an overall life of walking humbly with our God.