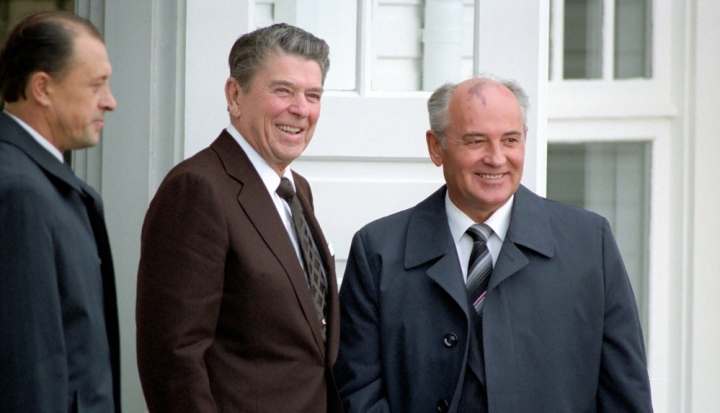 German filmmaker Werner Herzog loves Mikhail Gorbachev, the last president of the Soviet Union. He says so right in the middle of his documentary, Meeting Gorbachev. He brings the diabetic Gorbachev a box of sugar-free chocolates, and later, when they are discussing the unification of East and West Germany, Herzog confesses: “We [Germans] love you. . . . I love you.”

Herzog’s Gorby-philia should come as no surprise. After all, this is the director who once made a movie, Fitzcarraldo, about a man trying to haul a massive steamship over a Peruvian mountain. It’s hard to think of a better analogy for what Gorbachev tried to do in reforming the U.S.S.R. In Herzog’s movie Fitzcarraldo gets his ship over the mountain only to lose it in the river on the other side. However, in the Soviet Union Gorbachev’s boat slid back down the mountain and crushed him.

Meeting Gorbachev centers on Herzog’s conversations with the great man in his Russian home. Despite its focus on events from more than 30 years ago, it’s impossible to watch Meeting Gorbachev without thinking about the current state of Russian affairs. Gorbachev says he wanted to make his country as open and prosperous as its Western counterparts. But today’s Russian leaders fear free expression and view the West as hostile and threatening. Today we are at the beginning of a new Cold War. The Russians are trying to expand their sphere of influence, and the Trump administration recently pulled out of the treaty banning intermediate-range nuclear forces, the signature achievement of Reagan and Gorbachev’s détente.

All this makes the present a pretty good time to hear some last words from the Russian who ended the first Cold War.

Gorbachev, we learn, was born and raised in the Stavropol region in Russia’s northern Caucasus. Gorbachev’s parents worked on a collective farm, as did the future president in his teens. Gorbachev joined the Young Communist League at 15. At 19 he was selected to study law at Moscow State University. After graduation he was sent back to Stavropol and eventually became regional secretary of the Communist Party there.

Stavropol was a favorite vacation spot for Kremlin bigwigs, and Gorbachev made a good impression on these visitors. Soon he was called to Moscow to join the Central Committee as secretary of agriculture. In 1980 he was promoted to the Politburo, the Communist Party’s executive committee.

At this point in the documentary, Herzog treats us to a darkly humorous montage of elaborate Soviet state funerals. First Soviet ruler Leonid Brezhnev dies. He is succeeded by former KGB boss Yuri Andropov. A year later, Andropov dies. His successor, Konstantin Chernenko, is already gravely ill when he takes office, and, a year later, he dies too.

Finally, power devolves to the youngest member of the Politburo, Gorbachev. When he took office Gorbachev knew that the Soviet Union needed drastic changes. “Nothing worked,” he says. He called for perestroika—reconstruction—to bring more accountability into the system and glasnost—openness—to encourage public participation and debate. These reforms accelerated after the Chernobyl nuclear disaster demonstrated to the world how broken the Soviet system really was.

On the global stage, Gorbachev began serious disarmament talks with the United States, withdrew Soviet troops from Afghanistan, and allowed the Soviet bloc countries of Eastern Europe to go their own way. In 1989, when Germans started tearing down the Berlin Wall, Gorbachev let it fall.

Near the end of the documentary, Herzog asks what Gorbachev wants written on his tombstone. Gorbachev says simply: “We tried.”

And that he did, but Gorbachev’s attempts to democratize the Soviet Union were doomed mostly by his lack of a popular constituency for them. Gorbachev wasn’t raised to power by the people. He was anointed by the powerful.

In the documentary, Gorbachev says that he wanted “more democracy and more socialism” for Russia. For a minute or two in the late 1980s it seemed possible to hope that a new kind of democratic socialism might emerge there. But that was not to be. Gorbachev introduced market-oriented economic reforms, but, as Keith Gessen wrote in the Nation, “Capitalism attached itself to the massive Soviet economy and started sucking out its insides.” So in the early 1990s former Soviet officials—today’s “oligarchs”—became private owners of formerly state-owned businesses. By the end of that decade, another old KGB man, Vladimir Putin, had become their king.

In foreign policy, Gorbachev’s great mistake was to believe that George H. W. Bush and company shared his idealistic vision of a peaceful world. The Western powers acted like partners until the Soviet Union dissolved. Then they started acting like triumphant victors out for their spoils.

During reflective moments in the documentary, Gorbachev says of the dissolution of the Soviet Union, “I regret it to this day.” In his post-Soviet career, Gorbachev tried to start a social democratic party in Russia with no success. He ran for president against Boris Yeltsin in 1996 but received less than 1 percent of the vote.

The final scene in the documentary shows Gorbachev reciting a poem by Mikhail Lermontov, a 19th-century Romantic who was called the “poet of the Caucasus.” But the lines of poetry Meeting Gorbachev left in my mind were from an American, John Greenleaf Whittier, who wrote: “For of all sad words of tongue or pen / The saddest are these: ‘It might have been!’ ”