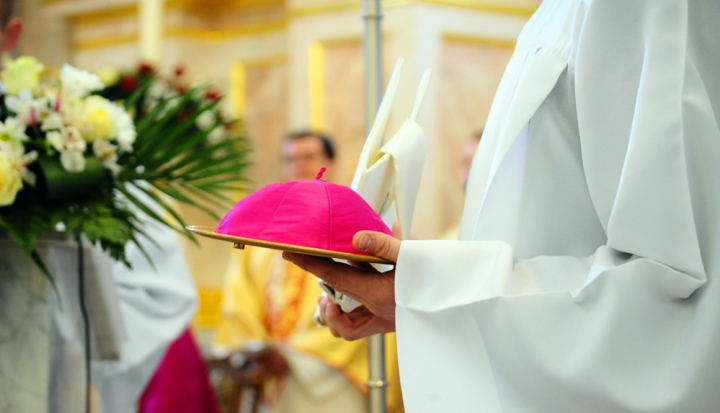 In 374 the bishop of Milan’s death sparked a deep conflict over the election of his successor. Fearing a threat to public order, the local governor, a man named Ambrose, appeared at the cathedral to appeal for calm. His eloquence so impressed those assembled that they began to chant his name and demanded he become bishop. Ambrose would go on to become a doctor of the church and the man who baptized St. Augustine.

While Ambrose’s story is somewhat extreme, it was once common practice for ordinary Catholics to play an important role in the selection of bishops. Why did this change?

In the earliest years of Christianity, a group of elders governed most local communities. Over time, more churches began to favor a model where one of these elders served as an “overseer,” a term taken from the Greek episkopos and the root of the English word bishop.

In these small, tightly knit communities, everyone had some voice in the selection of a new leader. There are numerous examples of bishop candidates whom the faithful rejected.

Things began to change when Emperor Constantine decided to make Christianity the favored religion of the Roman Empire. Constantine and his successors believed that the selection of bishops was too important to leave in the hands of ordinary believers. Local clergy and bishops from neighboring provinces began to play a dominant role.

When the Roman Empire collapsed, kings and princes across Europe took advantage of the power vacuum to contend for land and power. The office of bishop became a valuable prize with which to reward allies. The Holy See increasingly took the position that the centralization of episcopal appointments in Rome was the only way to free the church from political interference. However, it was not until the 19th century that the papacy finally won control over the majority of episcopal appointments in Latin-rite churches.

Under the present Code of Canon Law, the pope appoints bishops or confirms those who have been appointed through other means. There are a few dioceses in central Europe where local clergy continue to play an important role. Here in the United States, when a see becomes vacant, the papal nuncio consults with American bishops to create a terna, a list of three candidates to present to the pope. While the pope usually selects one of the three, he is always free to choose someone else.

All of these steps, however, are shrouded in secrecy. Catholics living in a diocese needing a new bishop have no ability to learn who is being considered or to provide feedback on his suitability. As the church struggles to recover its credibility in the wake of the sexual abuse crisis, we might consider some advice from a fifth-century bishop of Rome, Pope Leo the Great: “He who is to preside over all must be elected by all.”