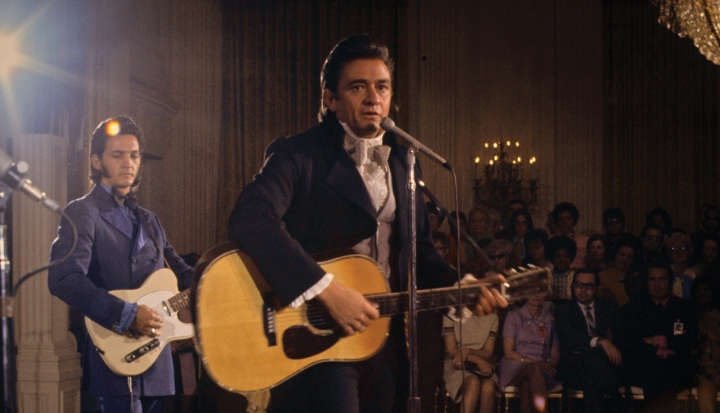 Anyone who has trouble grasping the notion that human nature is simultaneously divine and depraved just doesn’t know enough about the history of the popular music industry.

I’m not just talking about the obvious stuff, such as Ray Charles taking a gospel song and giving it lustful lyrics or Hank Williams singing “I Saw the Light” through a haze of morphine and alcohol. There is also the sharp, two-edged fact that, for almost a century now, the popular music industry has drawn its lifeblood from the profound cultural expressions of oppressed people—especially the children of Africa and Appalachia. And throughout that time the music business has simultaneously given a transformative voice to those previously voiceless people and systematically plundered their heritage for corporate profit.

The entire sweep of that story is on display in ReMastered, an eight-episode documentary series currently rolling out on Netflix.

Many of these documentaries involve musicians who met violent ends. These include Chilean folksinger Víctor Jara, R&B icon Sam Cooke, Run DMC’s Jam Master Jay, and the members of The Miami Showband, an Irish pop group gunned down in 1975 at a British army checkpoint. The series launched last October with “Who Shot the Sheriff?”, a long, deep look into a failed assassination attempt on Jamaican reggae star Bob Marley.

Throughout the late 1970s Jamaica’s political struggle between Michael Manley’s socialist People’s National Party (PNP) and Edward Seaga’s pro-American Jamaican Labor Party (JLP) regularly boiled over into armed conflict between Kingston gangs allied with each group. Marley tried to remain above the fray, but in late 1976 he was working with the PNP Ministry of Culture to produce a massive free concert aimed at improving the island’s image. Two days before that concert, gunmen stormed through Marley’s Kingston home, firing wildly. Marley’s wife, Rita, his manager, and an employee were seriously wounded. Marley suffered a superficial wound to his arm.

After exploring various theories, filmmaker Kief Davidson leads us to the likely conclusion that Marley was shot by a JLP-affiliated gangster whose weapons came from the CIA and who, a few years later during the Seaga administration, became a key figure in the movement of cocaine from Colombia to the United States.

Víctor Jara was another singer who ran afoul of U.S. foreign policy. Jara was the voice of the movement that brought democratic socialist Salvador Allende to power in Chile, and in 1973 Jara became one of the first victims of a U.S.-backed military coup. Jara was executed in the Santiago soccer stadium that today bears his name, and the episode “Massacre at the Stadium” tracks the decades-long, partially successful effort of Jara’s widow, Joan, to identify and prosecute his murderers. The chief suspect, we learn, lives in Florida, under protection of the U.S. government.

Sam Cooke’s 1964 death was, at least on the surface, more mundane. A Los Angeles court found that he was shot by the owner of a cheap motel when he stormed her office in a violent rage after his female companion made off with his pants. As we learn in “The Two Killings of Sam Cooke,” a lot didn’t add up about that scenario. And in retrospect some in the African American community have come to see Cooke’s death as one of a series of killings, from Medgar Evers to Malcolm X to Martin Luther King Jr., that cut short the lives of black men who posed a threat to white power.

That’s pretty elevated company for the guy who launched his pop career with the saccharine teeny-bop hit “You Send Me.” But in his last years, Cooke had taken control of his career, started his own record company, and taken to hanging out with the likes of Malcolm X and Muhammad Ali. By the time the documentary soundtrack goes to Cooke’s posthumously released civil rights anthem “A Change is Gonna Come,” it’s possible to see how someone somewhere might have felt threatened by this brilliant, beautiful, and supremely talented young man.

Johnny Cash, however, was a musical threat the establishment didn’t see coming. Barbara Kopple’s entry in this series, “Tricky Dick and the Man in Black,” focuses on the time in April 1970 when Richard Nixon, beleaguered by massive anti-war protests, invited Johnny Cash to play at the White House. Nixon, knowing nothing about country music, requested that Cash play two controversial right-wing country hits by other artists, “Okie from Muskogee” and “Welfare Cadillac.”

Cash was instinctively conservative and a genuine patriot, but he was also a poor boy who’d grown up in a New Deal relief colony and had a Southern populist’s innate sympathy for the underdog. He was also, unknown to Nixon, increasingly troubled about the Vietnam War.

Cash didn’t play Nixon’s requests. He instead unveiled a new song with the refrain, “The lonely voice of youth cries out, ‘What is Truth?’ ” that seemed to cast his lot more with the protestors than with the president, a turn that was cemented a few months later with the release of “The Man in Black,” which explained Cash’s wardrobe choice as an act of solidarity with the disenfranchised.

The Emmys, Oscars, and Peabodys won by ReMastered’s various directors could weigh down the sturdiest mantel shelf, and that shows on the screen. Each episode I viewed displayed a sure mastery of the documentarian’s narrative craft, from the slow on-screen aging of Víctor Jara’s widow to the long, silent close-ups of Sam Cooke’s associates listening to “A Change Is Gonna Come.” The finale, “Lion’s Share,”  retells the story of Solomon Linda, the South African Zulu singer who wrote “The Lion Sleeps Tonight” and didn’t make a dime from it.