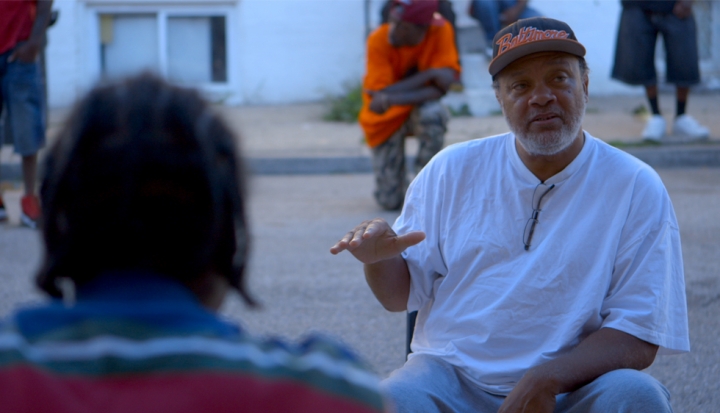 Baltimore wants so badly to be known for its waterfront and its historic neighborhoods, but instead it is famous for murder, gang wars, and police brutality. Blame it on David Simon, the former Baltimore Sun journalist who from 1993 to 2008 brought the city’s woes into our living rooms in Homicide: Life on the Street and The Wire. Then, in this decade, when Baltimore’s reputation was starting to recover, there came the 2015 police killing of Freddie Gray and the brief violent rebellion that followed.

However, if Marilyn Ness’ feature-length documentary, Charm City (on PBS starting April 22), finds the audience it deserves, Baltimore may become better known as home to a group of tough, smart, and supremely dedicated African American public servants working against all odds to give their city a better future.

The star of the show is Clayton Guyton, founder of the Rose Street Community Center in what was once one of Baltimore’s most drug-plagued neighborhoods. We see Guyton holding court on the sidewalk in front of his center’s row-house headquarters. There he convenes morning meetings that open with prayer and include Guyton’s pointed exhortations to the young black men gathered around him, many of whom are recent ex-offenders. The men then disperse to their work cleaning the streets or cruising around the Baltimore to defuse potential violence.

Monique Brown is a police captain whom we see on a one-woman crusade to restore the credibility of the force in the city’s African American communities while also struggling to hold up the morale of the overworked officers she leads. Brandon Scott, Baltimore’s youngest City Council member, is shown as an effective, relentlessly on-message voice for his community insisting, convincingly, that violence is a public health problem.

Charm City doesn’t spare its viewers the hard truths. For instance, Clayton Guyton, for all his love and commitment, can’t keep violence away even from his closest associates. But the movie does leave us convinced that Baltimore and other cities like it have the ability to heal themselves if America ever decides to make that a priority.