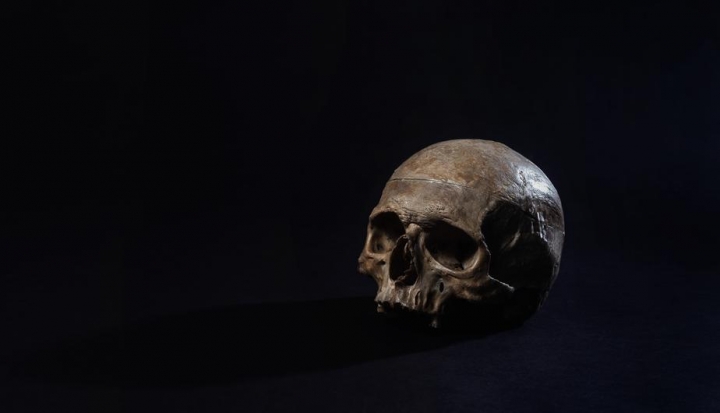 Daughters of St. Paul Sister Theresa Aletheia Noble, author of Remember Your Death: A Memento Mori Lenten Devotional, started keeping a skull on her desk a couple of years ago. She tweeted images of her ceramic skull; relevant quotes from scripture, saints and poets; and the hashtag #MementoMori: “Remember you will die.” The first time she tweeted “Day 1 with a skull on my desk,” her website says, she thought nothing of it. But the overwhelming response she received encouraged her to pursue the practice more deliberately.

I followed her on Twitter with interest. I’ve always had a fascination with death, accompanied by a preference for black clothing and heavy metal. Chalk it up to artistic temperament or the fact that I’ve spent more time at funerals than most of my peers. My mother died when I was 14, and I lost most of my extended family before I graduated from college. Noble, too, comes from a family acquainted with death. The Nobles ran a funeral home in the late 1880s.

Death was, in fact, what drew me back to practicing Catholicism. Specifically, I was drawn to the prominent display of the crucifix in our churches and homes and to meditations such as the Way of the Cross. Catholicism seemed to me the only place in our culture that wasn’t afraid to look death in the face. In a Catholic church, I was never asked to deny what, for me, was already a harsh reality.

In fact the practice of memento mori—meditating on one’s death—has a rich Christian history, and Sister Noble is at the forefront of a movement to reclaim it. Remembering our finitude once emphasized the urgency of the call to holiness, but until I saw Noble’s tweets, I noted that the “Death Positivity” movement was being led by secular champions who recognized that our fear of death, and our inability to talk openly about it, was killing us.

Atul Gawande, surgeon and author of Being Mortal, wrote in the New Yorker that “medical science has rendered obsolete centuries of experience, tradition, and language about our mortality, and created a new difficulty for mankind: how to die.” We’ve lost important rituals and cultural frameworks—the ars moriendi, or art of dying—and that only makes coping with death more difficult and more dangerous. Our lack of ability and willingness to talk about death affects how we treat serious illness and too often, Gawande says, needlessly increases human suffering.

Caitlin Doughty, mortician and best-selling author of Smoke Gets in Your Eyes and Other Lessons from the Crematory and From Here to Eternity, deliberately set out to bring death into the light. She created the YouTube series Ask a Mortician that strives, often through gallows humor, to take the mystery out of the funeral and burial process. She also cofounded what she calls Death Salons, held annually in different U.K. and U.S. cities. The events have a celebratory atmosphere, with lectures about green burial practices and artists and vendors of everything from compostable death suits to T-shirts that read “Future Corpse.” Death positivity activists are united by a dark sense of humor.

On Instagram, I follow several “death doulas,” such as Jill Shock, who, much like typical doulas do as birth companions, accompany people during their end-of-life transitions. Reading about Shock’s work, I wondered what my own mother’s death might have been had we been able to accompany her with resolve, rather than refusing to even entertain the possibility of her dying. I wonder if by practicing ars moriendi and memento mori it might have been possible to bring comfort instead of fear to her deathbed.

Noble says that the skull on her desk reminds her that she will die, and “my Savior has transformed death into a doorway to new life. Focusing on your death may seem morbid, unhealthy, disturbing, and perhaps even diabolical,” she writes. “And in some cases it can become so. Death in itself is an evil.”

Noble thinks remembering death is a “dusty practice” that Catholics need to rediscover. Her new devotional, like her Twitter feed, includes her own observations and quotes from scripture, church fathers, and the saints. The companion journal also contains a section of prayers and daily prompts. She hopes that as readers begin to incorporate the practice into their personal lives, they’ll talk more about it in their churches and with their families.

If they start tagging their social media with #MementoMori, they may be surprised to find a much larger community than expected, in and out of the church, finding new meaning in life by thinking more about death.

TagsBooks and literature Culture in Context Death and dying Spirituality