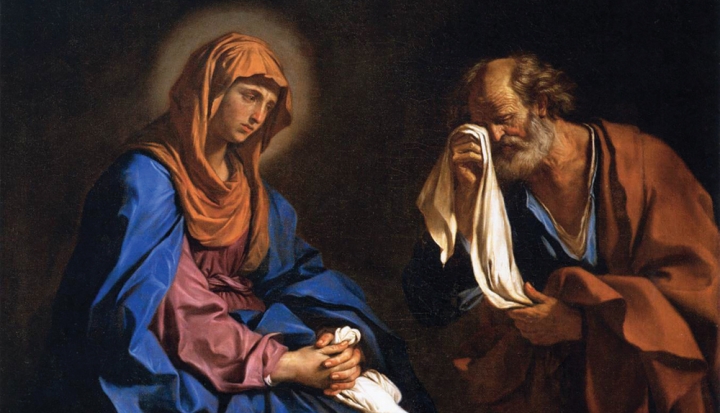 Why are they crying? Why cry now? It is the question I ask each time we’re confronted with the maudlin passage in Nehemiah, Chapter 8, where Israel stands weeping buckets before Ezra the priest. We’ve all heard bad homilies. Rarely so bad that we reach for the Kleenex. The people gathered here have returned from a generation of exile. These folks had long ago hung up their harps by the unfriendly rivers of Babylon. They had lain down and wept for thee, Zion, as the old Don McLean song goes. But now they’re home! They’re back in Zion! If there are tears now, they should be tears of joy.

But that’s not why these people are crying. They’re not grateful beyond imagining, weeping with relief. They’re sobbing the anguish of broken hearts in the public square. What’s rending their hearts in an hour that might have been reserved for celebration? What is Ezra doing to them that’s so incredibly painful?

He’s reading them the law, that’s what. And it’s killing them.

Would you or I weep at the proclamation of a rulebook? It’s a puzzling scene if we don’t appreciate law as biblical folk did. We think of the Ten Commandments or the entire book of Leviticus with its 613 specific rulings. Yet Ezra, we’re told, reads aloud to the assembly from daybreak till midday. I don’t care how slowly you read the Decalogue or all of Leviticus: It doesn’t take six hours.

In Ezra’s time, the “law” implied the entire sacred text, much of it composed during the time of exile. Stories of creation and the great flood, of slavery in Egypt and rescue through the Red Sea, of purification in the desert and restoration to the Promised Land—this whole saga comprised the guidance of Israel. Altogether, it’s a story of God’s fidelity versus our disloyalty, of God’s compassionate forgiveness answered by our relentless and ruthless betrayals.

And if we hear it right, it’s enough to make anyone weep. What breaks the hearts of these people who have been rescued once more by their loving God is the realization that they’ve stood here before. If the past is any indication of the future, it won’t be long before they abandon their saving God again.

What’s needed to break the cycle of second chances and repeat failures? A simple thing called integrity. Often we dumb down the idea of integrity to merely the telling of truth—or worse, telling our truth. Integrity is a kind of honesty, but it’s not confined to words. Integrity means holding everything together in harmony with what’s at the center. Our words must be one with our intentions, and our intentions with our decisions and actions. All of which should spring from values formed by what we believe and in whom we trust. Weeping Israel realizes its whole history lacks integrity. They’ve claimed all along to be God’s people. But they’ve lived only for themselves.

How do we get from a life of contradiction to integrity?

Start with honesty. We routinely affirm it’s the best policy. Honesty involves personal sincerity, adherence to the facts, and fair dealings—as in, “She’s honest. She’s telling the truth. You can trust her.” Yet these elements of honesty aren’t always compatible. Adhering to facts may be the least fair thing you can do when the facts themselves are unjust. You can also be quite sincere when lying through your teeth, if it’s sincerely in your best interest to do so.

The familiar example from ethics class is hiding your Jewish neighbors during the Nazi occupation. What’s the right thing to do when Nazis are at the door: Tell them you’ve got Jews in the closet or lie about it? It might be “honest” to say, yes, I’ve got Jews in here. But this strict adherence to fact will result in the murder of innocent people. Consider how the untruth of Nazi values is more deadly than the lie that shields the innocent. So an honest person may say, “No, there are no Jews here,” which is another way of saying: None of your business. You don’t have the moral authority to demand this information. This is the righteous lie of an honest person who seeks fairness where there is none.

Some truths are not owed to anyone. Say a woman has been sexually abused. Statistics indicate 1 in 4 or 5 women has been molested or raped, either as children or adults. But 20 percent of your women friends don’t tell you these things, do they? Because this truth is not the whole truth about them. They may refrain from speaking of the abuse to avoid the stigma. We’ve seen an up-swell in such revelations in the #MeToo movement. Yet if you poll your friends, some will deny being abused, even if they have been. They don’t owe you this truth. It does not detract from their basic honesty to withhold the story. Like hiding Jews in the closet, it is not your right to know. It is perhaps the question and not the answer that lacks integrity.

I may know something hurtful that I’m not telling you. Say you’ve just given the worst talk of your life in front of an audience. You know it and I know it. You come down from the stage and ask how it sounded. You know it was bad; you don’t need me to tell you this. What you really want from a friend is encouragement. So I say, “You did the best you could. Some people heard what they needed to hear. I’d say you deserve a beer!” Is this a lie? Is it the truth? It’s not the whole truth, but nowhere in the Bible does it say, “Tell the truth, the whole truth, and nothing but the truth.” Save that for a court of law. Your friends don’t need that kind of truth! And they’re not asking for it, if you listen closely enough.

What commonly passes for truth these days is a bald presentation of facts without context. The real truth is I can’t tell you about your failed talk without taking you into account: your present moment of disappointment and our friendship. The greater truth is I love you—and your talk didn’t work. We can talk about that later, when you’re ready. But right now, the bigger truth is I care about you. How do we say that first and loudest?

Integrity is lately confused with venting or flaming, which may have integrity only with our desire to be mean. I’ll express how it feels inside, what I really think, and you’re going to hear me out! So take that, bozo! The personal assortment of emotions and convictions we inflict may indeed comprise our inner reality. But that doesn’t make any of it true except in a narrow, subjective sense.

Integrity can’t begin from a harsh and self-serving spew of personal truth. Integrity is a life-harmony that emanates from the center and holds everything together in one place. What’s at that center? For the believer, it’s God’s holy will; that is, loving relationship with our creator and creation. What we do has integrity when it moves from that center. If we intend, seek, speak, and decide as God does, our actions will reveal great integrity. The rest is blather. The sooner we realize that, the sooner we’ll all have a good cleansing cry—and get on with it.