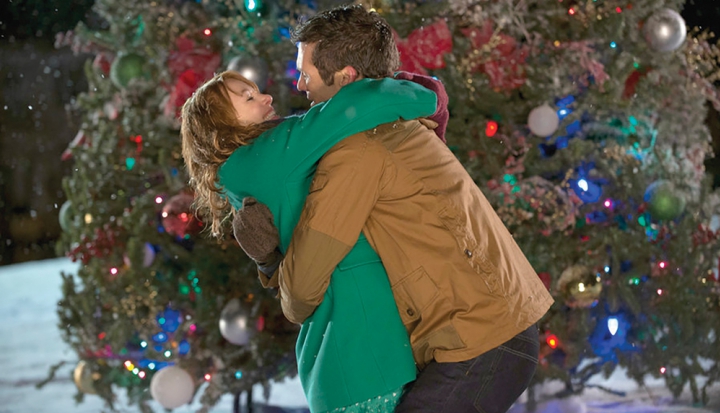 Often, the acting is awkward, the plots shopworn, the wardrobes odd, and the holiday decorations tacky. The scripts are hardly witty and what passes for humor amuses only the characters on the screen. And for some reason everyone’s hair always looks a little goofy.

The stories are so formulaic that apps have been built to generate fake Hallmark plots if you just plug in a few nouns.

A successful New York/Chicago/Atlanta/Boston career woman wearing edgy clothes and stiletto heels is forced to travel to a small town because she inherited a bed and breakfast/gift shop/newspaper. She is played by a B-list actress who is pretty, but not so thin or sexy she might threaten female viewers. Within days, her fashion sense regresses to sensible shoes and plaid shirts, and her ambition shrinks from representing corporate clients in courtrooms to helping locals rezone their ranches.

Her life dilemma—should she have a career and thus become a heartless barracuda or stay down on the farm and find true love while baking pies?—is resolved by listening to the simple wisdom of townfolk, played by aging actors from once-beloved TV series who are now too old, chubby, bald, or genuine to attract paparazzi. When her suit-wearing, successful boyfriend (these qualities always indicate Mr. Wrong in this particular moral universe) arrives from the big city with a 7-carat diamond in a black velvet box, her heart is instead stolen by a homespun, lanky chap who drives a pickup, wears blue jeans, and pops the question with his grandmother’s wedding ring.

The alternative Hallmark formula is the adult retelling of every bedtime story and Disney plot on which little girls cut their romantic teeth. A prince falls for a governess, a king falls for a shopgirl, a famous celebrity trips over a dogwalker and love is in the air. The more improbable the better: A hardworking but underappreciated administrative assistant is surprisingly informed by a mysterious man in a black limousine that she has just inherited the throne of a tiny kingdom somewhere over the ocean (there is never a map and are never coordinates), and after many pretty dresses and a ball—of course there is a ball—she finds true love with the horse groom, who turns out to actually be an Oxford-educated international CEO.

These narratives are as familiar and unrealistic as fairy tales, with happily-ever-after endings that are pat, perfect, and utterly lacking in suspense. After viewing the first two minutes, any one of us could accurately write the denouement on a piece of paper, go have a pizza, and return in 90 minutes to find out we were precisely correct.

But we won’t do that, because we love watching them.

Hallmark’s Countdown to Christmas, daily airings of reruns and new films, begins in late October and continues through the festive season. It has become destination viewing, mostly for women, and it can feel like a guilty pleasure. In the Hallmark Christmas world, most of life’s problems are solved by getting married. Corner offices, ambition, and education are distrusted. Few characters are gay, non-Christian, or non-white, though there have been incursions of inclusivity here and there over the last few years.

Though they may be cheesy, are these films doing more damage than reality TV or heavily gendered sports programming or crime shows in which women who dare to jog alone are murdered each week? Hallmark films never contain bloodshed, violence, or decapitations. They never feature STDs, full frontal nudity, partial nudity, or even a revealing bathing suit. There are adorable puppies, fresh-baked cookies, some actress we thought had died long ago, and people who are slightly more plump than we are. Hallmark Christmas movies do not make us feel afraid or insecure.

And more than just that is going on. These films celebrate things that are important to most women: family, homemaking, friendship, balancing your job with your personal life, and, unapologetically, romance.

Media scholar Janice Radway once studied why women read romance novels, with insightful results. She found that while wives devote their attention and energy to their families, too little love and attention comes back to Mom. Romantic stories help fill that gap, offering an escape from daily routine and a way to spend time with male heroes who actually pay attention to, seek out, and value women. Readers know all too well what it’s like to live in a patriarchal society; romances validate what women bring to the table.

Men receive overwhelming cultural support for watching sports programming that does little to reinforce values of family, faith, and compassion and much to promote violence, aggression, and misogyny. Though watching sports is pure male fantasy, men are encouraged to experience the intense enjoyment of it.

Barcalounger beer drinkers are hardly going to become gridiron warriors or love interests for the cheerleaders, yet men aren’t mocked for the silliness of hours on weekends spent yelling at the screen.

However, female viewers are often shamed for enjoying romantic entertainment that features family, love, forgiveness, and compassion. Society holds women responsible for enforcing and enacting those very values but perversely dismisses their enjoyment of media stories that recognize the lived experience of women’s lives. Hallmark holiday films depict the rarest of all things, a woman-centered world. It’s not a world that showcases women at our most intellectual or nuanced, but it does offer an unapologetic soak in things that give women pleasure: pretty houses, laughing children, warm communities, and the devoted attention of a man who bothers to groom himself.

Ah, well, a girl can dream.

What is social action in the church today?