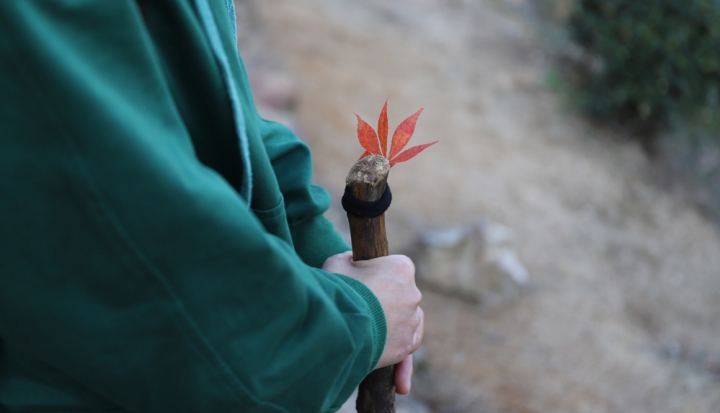 Les Johnson’s faith has taken him all over the world. He’s been to Lourdes in France, Medjugorje in Bosnia and Herzegovina, and even to Rome, where he met Pope John Paul II. And on each journey, Johnson always has a special object in tow—a walking stick.

For 50 years, Johnson, a retired sheet metal worker, has been turning unique branches into beautiful walking sticks and gifting them to people he encounters around the world. His ministry of finding, carving, and giving away these walking sticks is how Johnson lives out his faith.

Johnson’s unusual ministry began on an autumn day in 1967, when he led a group of Boy Scouts along the Cuyahoga Trail in Peninsula, Ohio as their chaplain. As they walked, he proposed a challenge to the scouts: Whoever could find and bring him a gnarled stick that showed character would get a free trip to camp. Within minutes, one of the scouts returned with the “perfect” stick that Johnson decided to take and carve. What began as just a fun activity for the boys blossomed into a decades-long ministry that has come to define Johnson’s faith life.

Johnson, a secular Franciscan, feels that by taking these discarded, curved sticks and sanding and carving them into something beautiful, he’s spreading the message of God’s peace into the world. “It’s what I’ve been called to do,” he says.

And it’s not just the carving of the walking sticks that has a spiritual connection for Johnson; it’s the giving them away, too. Since that autumn day on the Cuyahoga Trail, he’s carved and gifted 833 walking sticks.

Over the years, Johnson has developed a ritual behind carving the sticks, which he does inside his workshop that sits alongside the mission he and his son Daniel have built behind their home in Akron, Ohio’s North Hill neighborhood.

The mission, called the Mission of San Damiano, includes an array of outdoor grottos and features a year-round nativity scene, a 16-foot crucifix, and several statues of various saints including St. Anthony of Padua and St. Francis of Assisi. Next to the grottos sits an old carriage house that they have transformed into a beautiful chapel. It features a statue of Mary that Johnson salvaged and refurbished, along with paintings, relics, and other items that visitors and friends have donated. Working inside his mission helps Johnson reflect on the spiritual dimension to his work.

As he prepares for a trip, Johnson spends four to five days working on the walking stick that he will bring with him. He says he does not necessarily design the sticks with the recipient in mind and instead concentrates on the shape of the stick and the feel of the wood to guide his carvings and designs. Occasionally he carves figures into the top of the sticks or carefully inserts religious medals or stones into the wood.

“Each stick is unique,” Johnson says. “I like to find sticks that no one else wants, not straight sticks, but ones with curves and depressions instead. Once I begin sanding and carving them, I know how they should look and if I should add things to them.”

Once the stick is finished, he sets out on his journey with it, always confident that he will know who is meant to receive it once he arrives at his destination. “I mean, look around, I’m not a world traveler,” he says, gesturing to his work bench. “But I’ve traveled the world. Every trip I take is a pilgrimage.”

Some of Johnson’s many walking stick recipients include Gerry Faust, Lou Holtz, Charlie Weis, coadjutor bishop of Erie, Pennsylvania Michael J. Murphy, and Pope St. John Paul II. He has already carved one that he hopes will someday find its way to Rome and into the hands of Pope Francis.

Each person who receives a stick also receives a brochure detailing the story behind Johnson’s ministry and the significance of the walking sticks. On the second page of the brochure is an empty space where the recipient’s stick number is written before Johnson gives it away, allowing him to track the number of walking sticks he’s created and shared.

“My walking sticks have led me to see a lot of places I never imagined I would see and to meet so many wonderful people,” Johnson says. “I know I am doing God’s work, and I feel blessed.”

Kayleigh Fladung is the Marketing and Grants Coordinator at Josephinum Academy, an all-girls private high school in Chicago.