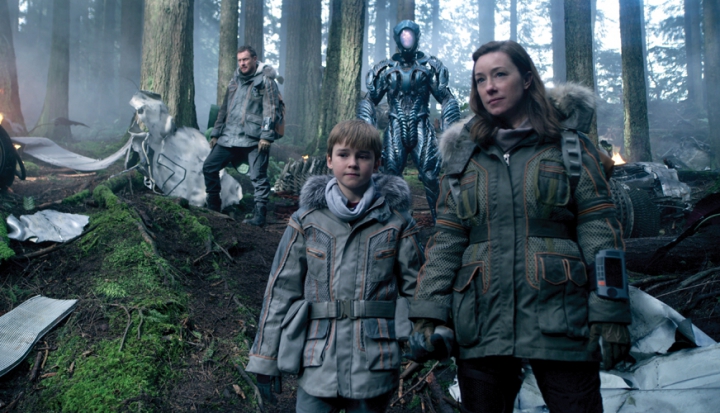 Toss a family onto a deserted tropical island—or, say, an uncharted planet in outer space—and see what happens when all social and cultural conventions and pressures are swept away and parents and children are forced to work together to survive.

That was the story arc of Johann David Wyss’ Swiss Family Robinson novel in 1812, which was made into a film twice—in 1960 and in 1998. Then the Robinsons were reimagined as being shipwrecked not in the East Indies but in outer space on an uncharted planet in the Lost in Space CBS television series in the 1960s.

A remake of Lost in Space aired on Netflix this spring and has just been renewed for a second season. It’s a flawed but fascinating series that is at its best when it’s doing what Wyss originally set out to do: explore how family systems operate, thrive, and are threatened and how they might function as building blocks of human achievement, exploration, and society. Netflix’s version of Lost in Space reimagines and updates the 1960s Robinsons in intriguing and provocative ways.

Back in the ’60s on CBS, Dr. John Robinson was an astrophysicist with all the answers and none of the compassion. Mom, June Lockhart as Dr. Maureen Robinson, devoted most of her biochemistry knowledge to growing alien plants and making dinner. Their two daughters contributed little scientific acumen or narrative action, but son Will (Billy Mumy) was a precocious computer geek with an unnamed robot best known for its monotone warning in times of stress: “Danger, Will Robinson.” Villain Dr. Zachary Smith (the wonderful Jonathan Harris) seemed awkwardly inserted into the story line to provide some kind of conflict, though not much, along with distracting histrionics, girlish shrieking, and fainting fits.

In Netflix’s version, set in the year 2048, the know-it-all scientist is now Mom (we saw that one coming), played by Molly Parker. And she does know everything. Every darn thing. She saves everyone from most everything almost all the time with a prodigious knowledge of not just her own scientific field but also the fields of every other kind of scientist. Her spouse, a non-Ph.D. Navy SEAL (Toby Stephens), does not know everything and was an absentee dad off doing SEAL stuff until his family was selected to help colonize space. Unlike the 1960s Robinsons, who were rather like Ward and June Cleaver from Leave It to Beaver only in space, the new Robinsons have a troubled, apparently asexual marriage. And neither of them cook. What these people subsist on remains a mystery.

Eldest daughter Judy is an 18-year-old physician, a genius like her mother. It’s as though a female lead isn’t interesting unless she has superpowers of one kind or another. Judy is black and the rest of the family is white. This goes unexplained for enough episodes to appear to be colorblind casting, but eventually Judy makes an offhand comment that Robinson is her stepfather. Middle daughter Penny doesn’t add much to the plot. Will is now not a prodigy but still has a cool robot. Will is tentative and unconfident, which frustrates his military father and imperils his eligibility for the space trip.

Dr. Smith is now a woman, too—Parker Posey in an underwritten role that underutilizes her talents. The series suffers from an overdose of brainiac women who can do everything except be nuanced and believable characters. Smith is a sociopath, so we see none of Posey’s signature wit and humor. What her precise reason is for doing her dastardly deeds is poorly explained and amorphous, making Smith a villain without a cause and the narrative far from compelling. Smith just does mean things and then scowls in the background.

Still, the program challenges stereotypes and some intriguing things are going on. For one thing, the Robinsons aren’t alone in space. They travel with a multiracial group of fellow colonists, and there is even a whiff of interracial teen romance, though it is mighty tame. No one seems to be LGBTQ, though no one is that hetero, either—when lost in space, no one’s mind seems to turn to romance.

For another, though she’s the lead of the show, Dr. Robinson is not glamorous, with a no-nonsense wardrobe of cargo pants and T-shirts and a consistent layer of dirt and healing bruises. Even so she still manages to paint on eyeliner every morning in a remarkably straight line for someone fighting dying planets, fuel shortages, and seemingly certain death.

Finally, the show presents alternative masculinities. Dad is more tuned in to the kids’ emotional lives than is super-scientist Mom, who handles kids like graduate assistants, assigning chores along the lines of “split atoms before lunch” and “cross an endless swamp and find a missing escape pod.” Dad seems like arm candy for many an episode in a program in which women are both the heroes and the villain. He relates to his wife’s intelligence in respectful, unintimidated ways without feeling diminished by her success and ability. Son Will demonstrates weakness and fear, and Dad, who is as fit and athletic as GI Joe, counsels Will that he is fine just as he is.

Lost in Space dwells on the family feeling abandoned by Dad doing his military service, a brave and nontraditional story line.

In the 1960s, as the generation gap widened and the Summer of Love beckoned, teenagers were annoying if not downright frightening to their parents. CBS’s vacuous Lost in Space children must have been reassuring to viewers.

In 2018 the show’s children are independent to the point of being miniature adults and regard their parents with a cool and jaundiced eye—traits all too recognizable to modern parents. Netflix’s Lost in Space Robinson offspring and parents are forced into togetherness, must work to overcome their estrangements from each other, and come to recognize their own and appreciate each other’s strengths.