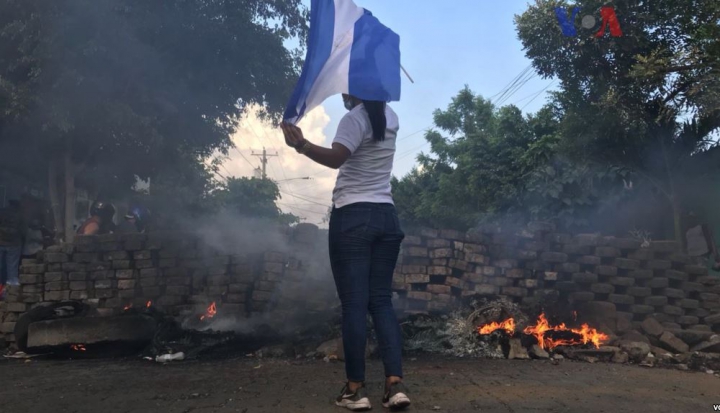 It has been nearly 40 years since the Nicaraguan Revolution began and the brutal Somoza family dictatorship was overthrown by the Sandinista National Liberation Front, which established a revolutionary democratic socialist party. Today, however, Nicaraguans are again suffering under an authoritarian government, this time led by Daniel Ortega and the vice president, his wife, Rosario Murillo.

Ortega was once a leader of the Sandinista movement who, during his first term as president in 1984, instituted many controversial progressive reforms. He returned to power in 2007, however, and when he ran for reelection in 2016, the corrupt government blocked any opposing parties from running and forbid any impartial oversight of the election, guaranteeing his victory. Since then, Nicaragua’s National Assembly has abolished presidential term limits and given Ortega control over the appointment of military and police commanders. His administration also tried to seize control of online media in 2015, but failed due to public opposition.

Nicaragua has existed in such a state of corruption for years, but the situation has recently deteriorated, and today the country is going through the deadliest conflict since the Sandinista revolution. Anti-government sentiment has intensified since President Ortega announced plans for the Chinese-backed Nicaragua Canal in 2014, which will destroy the lake’s ecosystem and forcibly displace more than 120,000 people from their homes.

Events escalated on April 16 of this year, when the Nicaraguan government approved legislation to cut social security benefits while raising people’s required contributions. Three days later, on April 19, opponents of the new law began peaceful protests in the streets all over the country. The government responded by sending out the national police and Sandinista Youth to attack protesters and destroy commercial establishments. Managua’s cathedral sheltered hundreds of student protestors to protect them from police and the Sandinista Youth until it was safe for them to leave. At least 25 people died that day, beginning what has been more than a month of violence in the country.

Ortega has since withdrawn the social security reform proposal, but the move was too little, too late for the Nicaraguan people. The protests that began in response to this unpopular policy have grown after the government’s deadly response. Human rights groups estimate that over 65 people have been killed by government forces so far. Many of these were students leading anti-government demonstrations in the streets and on college campuses, including in Jesuit Central American University in Managua, Nicaragua’s capital.

Nicaragua is a predominantly Catholic country, and the church has made ongoing pleas for reconciliation and peace. Pope Francis said in his weekly address on April 22 that the “useless spilling of blood must be stopped.”

The Catholic Church in Nicaragua has recently moved beyond pleas for peace to concrete action: they are currently mediating a national dialogue between the Ortega administration and civic groups with the goal of ending the conflict between the government and civilians.

The first round of talks started on May 16, when Ortega’s critics called him a “killer” and demanded his and Murillo’s resignation as president and vice-president; the Sandinista leader has denied any wrongdoing. Meanwhile, Bishop Juan Mata Guevara urged the president “that you rethink with your Cabinet the path you have taken. It has started—I say this with pain—a non-armed revolution.”

James Bosworth, a former Nicaraguan resident and founder of Hxagon, a risk assessments firm, told Catholic News Service that the Catholic Church’s role as mediator is precarious, but could serve Nicaragua well in the long run, saying “As uncomfortable as it is for both sides and as much as they dislike and disrespect each other, the Catholic Church should work to keep the two sides talking.”

The bishops seems to be living out the words of Proverbs 31:8–9: “Speak out for those who cannot speak, for the rights of all the destitute. Speak out, judge righteously, defend the rights of the poor and needy.”

Catholic priests have been peacefully protesting with Nicaraguans in the streets since the start of the recent unrest. Monseñor Carlos Enrique Herrera, bishop of the Jinotega diocese, led mediation with the National Police to release imprisoned protestors. Franciscan friars formed a human shield to protect protestors from police in Juigalpa.

One Carmelite priest, auxiliary bishop Silvio José Báez, has developed a massive following from Nicaraguans both in-person and on Facebook and Twitter. Just a few days before protests began in Nicaragua last month, Báez told Nicaraguan news site LA PRENSA in an interview that, while considering the circumstances of Romero’s martyrdom, he does not fear death. “My faith in Jesus Christ drives all fear away from my heart, especially because I do not act against anyone,” he said. “I have no personal interests to defend, nor do I feel threatened or attacked by anyone.”

Many Nicaraguans have called on each other to collectively protect Báez from harm because he is risking his life calling for peace and solidarity in the streets while unarmed. Protestor Harlen Zapata wrote in Spanish on Facebook, “We don’t want (Báez) as a martyr. We need him alive; we want him alive … We love Monseñor Báez. God protect him!” At the time of this writing, Zapata’s post has been shared more than 10,500 times and has nearly 3,000 Facebook reactions.

If only we could protect every Nicaraguan from violence committed by their government. For many, however, this is only the latest in an ongoing cycle of government corruption and violent control.

My own family is one of the many affected by Nicaragua’s tumultuous history. On the morning of January 3, 1976, my abuelita waited for her father inside her home in Managua. He was supposed to take her out for lunch to celebrate her birthday. Instead, a Nicaraguan military official came and told her that her father, who was also a military official, had been shot. He was already dead by the time she arrived to see him at the hospital.

My great-grandfather died three years before the Sandinistas ousted the Somoza dictatorship, which signaled the beginning of a new era for Nicaragua’s history. My abuelita immigrated to the United States a few months after her father was killed, and my mother and most of my family gradually followed suit soon after with the hopes that their homeland would become a safer and more prosperous country in the future.

Every time I hear the story of the worst birthday my abuelita ever had and why my family left Nicaragua permanently, I think of Psalm 82:3–4: “Give justice to the weak and the orphan; maintain the right of the lowly and destitute. Rescue the weak and the needy; deliver them from the hand of the poor.”

Sadly, my family’s story isn’t unique, and many more Nicaraguans are still facing similar trauma. While my abuelita prays the rosary for her family’s well-being every day, I pray that she will be alive to see peace finally come to her homeland.