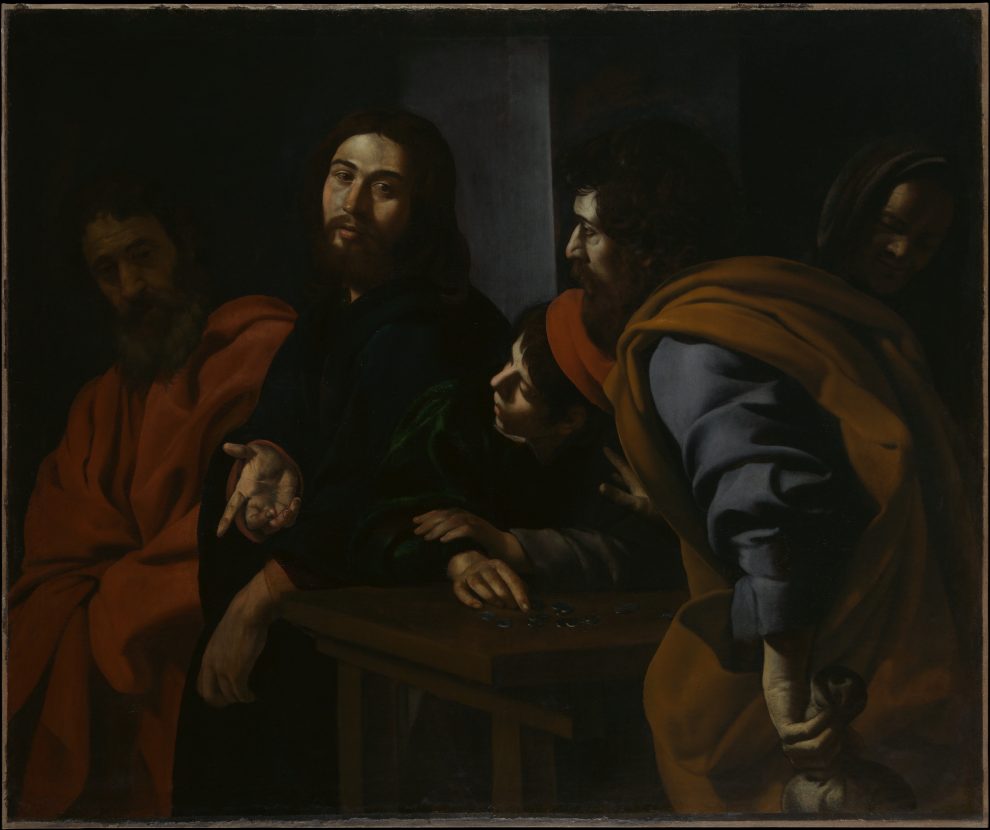 When I discovered Battistello Caracciolo’s The Calling of Saint Matthew seven years after my return to Catholicism, I was experiencing an ebb in my faith. I longed to reconnect with the force that had impelled me back to the church, but I was not quite sure where to begin. I slumped along with morning readings from the gospels, the prophets, and the Desert Fathers, but the words didn’t sear with the heat of newfound truth like they had before.

As my eyes drifted across these black and white lines of text, my spiritual life was in danger of stagnating into a similar monochromatic pall—rote and repetition where there should be raptness and renewal. By presenting a vision of Christ at his most approachable, Caracciolo’s painting provided the jolt that not only reawakened my faith but also deepened it in preparation for the next seven years.

With its predominantly dark palette, carefully considered lighting, and the rugged, earthy naturalism of its figures, The Calling of Saint Matthew owes a significant debt to Caracciolo’s most enduring influence, Caravaggio.

Caravaggio painted his own version of the subject in 1600, a quarter of a century before Caracciolo, for the church of San Luigi dei Francesci in Rome. Evidence suggests that Caracciolo saw this work in progress as a young painter on a tour of the Eternal City, mentally tucking the image away until he was ready to create his own interpretation. While Caravaggio’s is undoubtedly the more famous of the two works, studying them side by side has helped me isolate those qualities that speak to me so sincerely in Caracciolo’s canvas.

To begin with the obvious, both paintings depict the passage from Matthew 9:9 when Christ approaches the tax collector Matthew in his office and commands that he follow him. While various gospel accounts have Matthew rising immediately to take up Christ’s call, I can only imagine the internal conflict, however brief, that must have preceded such an accession. Here is a humble publican from Galilee being asked to abandon everything—livelihood, friends, the security of a workaday routine—to embark on a life of poverty, estrangement, and transience.

In Caravaggio’s depiction, the artist pulls back to allow the viewer to take in the entirety of the scene. One is a spectator, not a participant, in Matthew’s decisive moment that conditions his friendship with God. 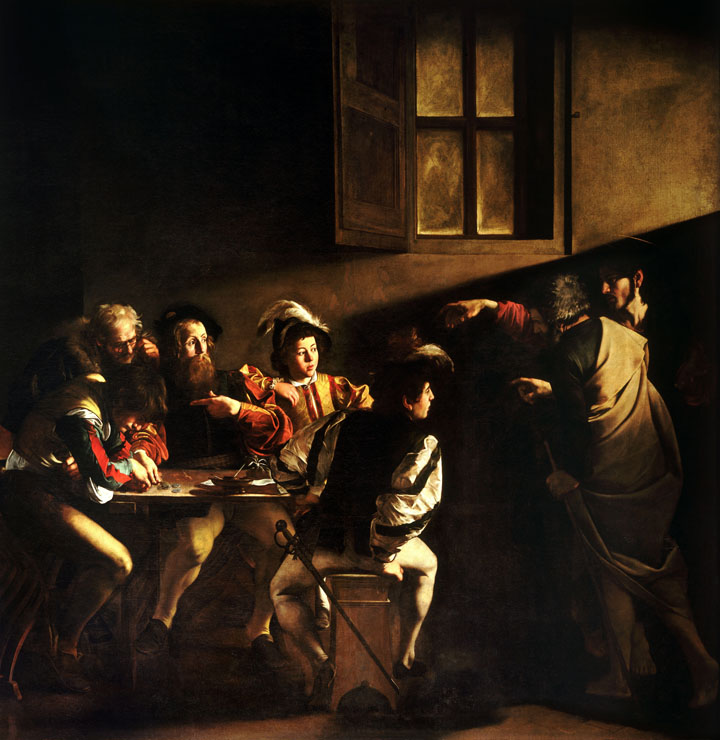 To the right stand Christ and an apostle, presumably Peter, while Matthew and his retinue of associates are clustered around a table on the left. The sense of time is compressed as I feel Matthew’s fate hanging in the balance; he has but an instant to get up and begin a new life.

As Brother Eric Wandrey and others have noted, this shock of urgency is heightened by a subtle detail: the positioning of Christ’s feet, which are already pointed toward the door. Their bareness contrasts starkly with the well-shod, well-dressed Matthew, whose finery is one more comfort he will need to leave behind.

Caracciolo’s rendering differs from Caravaggio’s in its use of pictorial space. There are only five figures to Caravaggio’s seven, and two of them—Peter on the left and an anonymous tax collector to the right—are relegated to the outer darkness of the canvas; I don’t even see the tax collector’s body, just the dim contours of his downcast face shadowed under his hood.

This leaves the three singularly lit figures of Christ, Matthew, and the young boy who appears to be Matthew’s assistant to dominate my perception of the scene. Caracciolo truncates their bodies, cutting them off at the waist, and reduces the overhead space so the crown of Christ’s head nearly touches the top of the canvas. This creates a claustrophobic effect that draws me into the action. In the Caravaggio, I observe the older man bent behind Matthew from a distance; here, I am thrust into that man’s perspective, witness to the moment with a startling immediacy.

Each painting’s spiritual, emotional, and aesthetic register is encapsulated by the artist’s use of gesture. Caravaggio has my eye track three pointing fingers tearing right to left across the canvas like birds of prey, elucidating the order of the narrative in a clear and determinate fashion: Christ’s above, hanging off a slightly bent wrist, reaching across the composition to pick Matthew out of the crowd; Peter’s below, pulled back in timorous imitation of the master; and Matthew’s, on the other side of the table, either acknowledging himself or pawning off Christ’s call on one of the two men hunkered over their coins behind him.

Through this flurry of gestures, the scene becomes a flashpoint of divine injunction and frenzied human response, a moment of wordless dialogue so tightly circumscribed it nearly implodes with the pressure of its psycho-spiritual stress.

I compare this with the hands of Christ and Matthew in the Caracciolo. Christ’s gesture is one of offering rather than demand, as if to imply that discipleship is a gift, not a conscription. Yet this gift is far from what the world deems valuable: The dirt-smudged palm, presented in this pecuniary setting, is his way of saying that he will not offer earthly riches but earth itself. It is no accident that his finger points to the fundament, not the firmament; it draws my attention to the dust I will have to accept as my origin if I, like Matthew, wish to follow him.

With his elbow resting informally on the tax collector’s table, left hand dangling casually off the edge, and the movement of the right hand across the body following the slight rotation of the head, Christ appears to be turning toward his auditor. The overture projects a level of calm all the more striking considering the location, a place of worldly avarice totally at odds with everything he stands for.

Jesus’ very ease neutralizes the negative connotations of this site, creating the redemptive space necessary for Matthew to listen, perceive, and act. Matthew leans into this space, engrossed, his finger lifted to the boy’s shoulder as if halting him in mid-conversation. I sense with Matthew that the truth is in his midst. Whatever he was discussing suddenly pales in importance.

“All the cosmos showed its human face out of the blackness,” I scribbled in my notebook as I stood before Caracciolo’s painting for the first time. “Christ wants me to speak rationally to him on my feet, to pray as a person to a person.”

It is precisely this personalism that so drew me into the image, creating a through line of communication from artwork to beholder in a way I had never experienced before. Where Caravaggio’s Christ is distant, demanding, and shadowed in profile, Caracciolo’s is proximate, patient, and the only figure shown facing the viewer in full light. His gaze seems at once to land on Matthew and look beyond him, breaking through the surface of the picture plane to locate me on the other side. This invites participatory contemplation in a way the Caravaggio does not.

When I let myself be located, I find I am with Matthew, held in the sway of his—now my—divine encounter. Time begins to slow, allowing for a meditative stillness as I experience the call of discipleship anew.

Michael Centore is a writer from Connecticut. His work has appeared in the Los Angeles Review of Books, Mockingbird, Killing the Buddha, the Clarion Review, and other publications.