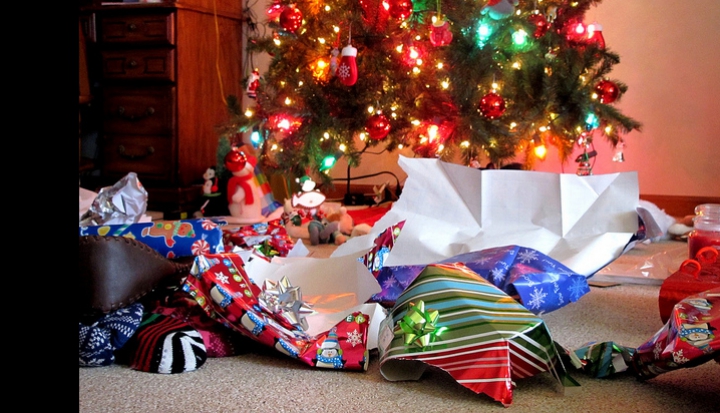 My father hates Christmas. We have a picture of him lying on my parents’ couch, wrapped up in a blanket, wearing both a Santa hat and a look of utter mournfulness.

For most of my childhood and young adulthood, this was something to tease him about. How could you hate Christmas? What part of gift giving and receiving, good food, and family is not to like? How could anyone not like the music, the celebration, the candles, and the hushed holiness of the Midnight Mass?

Last year, though, I started to understand where my dad was coming from.

I’m not sure what the tipping point was. Perhaps it was how the dog that my husband and I had just adopted the week before took an instant dislike to my father and tried to nip at his toes whenever she got the chance. Or perhaps it was how Amazon cancelled—without notification—the order containing the vast majority of my parents’ Christmas gifts to us kids. Or maybe it was that a couple days later at our celebration with my mom’s extended family, we spent two days in a house with four dogs and more than 30 people (including 10 kids), which resulted in the assorted hurt feelings and spats that can only happen among a group of people who love each other and know exactly what buttons to push to hurt each other. Or maybe it was just the exhaustion of celebrating five different Christmases with five different family configurations within 10 days.

I’m reassured when I remember that this chaos is nothing unique to my own family. My husband and I may bemoan the thought of a 12-hour car ride with two animals, but then I think of Mary, nine months pregnant and forced to travel for hours for census registration, the equivalent of renewing your license at the DMV. Or later when she and Joseph fled to Egypt, a journey not much different in length from my yearly pilgrimage from Chicago to New York, but via foot and with a newborn baby.

When Joseph announced the news of Mary’s pregnancy to his parents, I suspect they weren’t exactly thrilled that he was going to marry her anyway. “But an angel told me it’s OK!” was perhaps not the most reassuring thing to hear your son say in that situation.

I’m reassured when I remember that this chaos is nothing unique to my own family.

When Jesus stayed behind in the temple at Jerusalem and his parents didn’t realize he was missing for an entire day, I bet there were some raised voices and harsh words exchanged, no matter how impressed his parents were “at his understanding and his answers” (Luke 2:47).

And when John, Jesus’ cousin, announced his intention to go out into the wilderness and eat locusts and wild honey while proclaiming the coming of the Lord, I think it probably took his parents a little time to wrap their head around his decision. After all, he was their pride and joy, the child they had after they thought there was no hope.

If Jesus’ family relationships could be full of tension at times, this must be true for the rest of us. From our family we get our attitudes and behaviors. We receive traditions that have been passed down to us. We learn how to relate to others. Philip Culbertson writes in Caring for God’s People: Counseling and Christian Wholeness (Fortress Press), “A family is a system that has an integrity all its own and that operates in a consistent and only slowly changing, sometimes inefficient manner. The manner in which the system operates is determined by a set of unspoken rules and roles that specify how individual parts of the stem contribute to the functioning of the whole.” Every member of a family is connected to every other member, and while this is a wonderful thing, a source of support and love and nourishment, it can also be difficult.

When John, Jesus’ cousin, announced his intention to go out into the wilderness and eat locusts and wild honey while proclaiming the coming of the Lord, I think it probably took his parents a little time to wrap their head around his decision.

Take, for example, what happens when a family adds new people to this web of interconnected relationships. Each year my extended family grows and the group with which we celebrate Christmas changes. There are new babies, new significant others, new work and school schedules to plan around. And while this is an occasion for joy and celebration, it is also hard. There are growing pains as new people get added to family dynamics, and traditions are forced to change in order to welcome new members of a family.

Logistics get more complicated, it’s true, but I think it can also be threatening to change the way families have celebrated holidays for multiple generations. There start to be more pitfalls, beyond the “traditional” forbidden topics of politics and religion. In my family there are now several vegetarians, meaning that the traditional ham dinner has had to be rethought. Many of the younger generation bring wine or beer to share, while some of the older generation don’t drink and are uncomfortable with alcohol. As our families grow, so do our beliefs and cultural practices.

However, adapting traditions doesn’t always have to be painful. Every year on Christmas Eve my family celebrates the Italian Festa dei sette pesci—Feast of the seven fishes. When my grandma was alive, she would cook a seven-course feast: fried fish, marinated octopus, fish couscous, mussels and clams, and probably some eggplant parmesan just because. The meal would last for hours as we all crammed around the table in her tiny dining room in Queens, New York.

As our families grow, so do our beliefs and cultural practices.

Today we still celebrate, but it’s different. My grandma passed away a few years ago, and we no longer go to New York City every year. Instead, we have a new tradition. Every year my immediate family has our own Christmas celebration on Christmas Eve morning. We normally have just enough time to clean up the piles of wrapping paper and get dressed before my uncle and his family descend, bearing with them bagels, whitefish salad, lox, and homemade wine. Most of us go for a walk in the woods with the dogs to work up an appetite, while my dad stays home and cooks. When we return, we feast. We no longer have the seven separate courses my grandmother used to make; these days my dad normally makes bouillabaisse, an equally delicious way of getting all seven (or sometimes eight or nine) fish into one course. And while we’ve lost some family members, we’ve also gained some—not only my husband, who joined the family a couple years ago, but close friends who now celebrate this meal with us every year.

Despite the exhaustion and the frustration and the fights, this is what makes Christmas worth it. In the end, it doesn’t matter how far we’ve come or what we’re eating and drinking. For one evening, we come together and remember that we are family, no matter our differences. When I look over at my dad, no longer is he the sad Santa huddled under the blanket all alone. Instead, he is laughing, his head thrown back as he tells a joke to his brother and my husband.