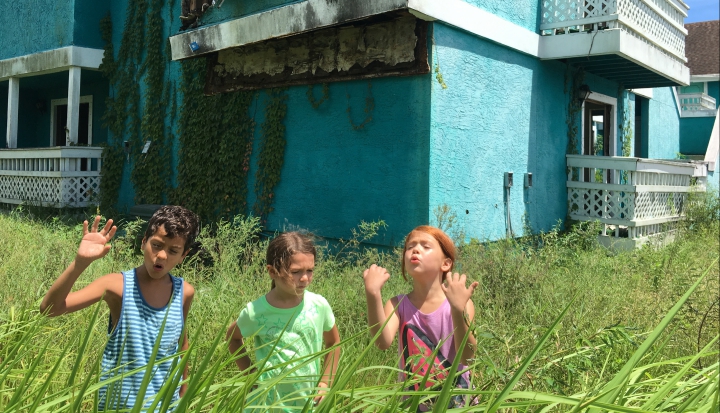 Kids are seen and heard a lot in The Florida Project, set during one hot, sticky summer in a $35-a-night motel near that true Orlando resort Walt Disney World. To 6-year-old Moonee (Brooklynn Prince) and her young friends, the floors, stairwells, off-limits areas, and grounds surrounding the low-budget lodging—teaming with cheesy tourist shops—are their playground, whether Moonee and her buddy Scooty are hurling spit over the second-floor railing (pelting another resident’s windshield with sticky gobs), begging change from passing tourists to buy a soft-serve ice cream cone for just sitting in the sun, or cracking each other up with noises, silly songs, and jokes. These kids don’t have much—a local pantry drops off loaves of bread every week—but their pure enjoyment of life despite poverty is startlingly beautiful to watch, and the film’s balance of reality and fantasy reminds viewers that both are important to the human experience.

Moonee lives in the Magic Castle motel with her mom Halley, a heavily tatted young woman with streaky purple hair, a near-constantly lit cigarette in her hand and torrent of foul language emanating from her mouth. For all her roughness, Halley (newcomer Bria Vinaite plays this volatile, fun, and fiercely protective mother) loves her daughter, but how she provides for her is suggested in different ways and called into question. Moonee is as adorably oblivious as her untarnished innocence allows her to be. The spitting incident introduces Moonee to her soon-to-be BFF, Jancy, who lives with her grandma and baby sister in the Futureland Inn motel next door. Each week, Halley scrapes together the rent to pay Bobby (Willem Dafoe), the motel manager/Mr. Fixit who cleans the pool but doesn’t exactly keep a vigilant eye on the motel kids whose parents’ maturity level isn’t much beyond their offspring.

This is the most ambitious film to date for writer-director Sean Baker, best known for shooting Tangerine (released in 2015), a comedy-drama about a transgender sex worker, on an iPhone 5S. In an interview, Baker says he wanted to assemble a cast of young characters along the lines of the “Our Gang” group of neighborhood kids depicted in the short comedies of the 1920s to 1940s. Those depictions of children acting fairly natural and raw were new for the time. Baker shoots for raw, unstudied portrayals and this trio of kids are allowed to shine in a natural, non-exploitative way.

There is a current of uncertainty here, too. Moonee washes her My Little Pony doll’s hair in the bathtub, humming all the while, when a man barges in. Halley shoos the man out, and at the same time Moonee pulls the shower curtain closed as though also closing off the seeds of knowledge that something isn’t right. Weird adult stuff goes on around them, but childhood’s hold is so strong and a Magic Kingdom is close by. The film is anchored by these performances whose power comes from being mostly untrained. One morning, Halley drags Moonee to a local resort for brunch, billing it to a fake room number. Moonee stuffs her face, the camera panning on her face and every joyful moment of eating. It’s in those moments that The Florida Project’s simple objective is enough.

Photo by Marc Schmidt, courtesy of A24