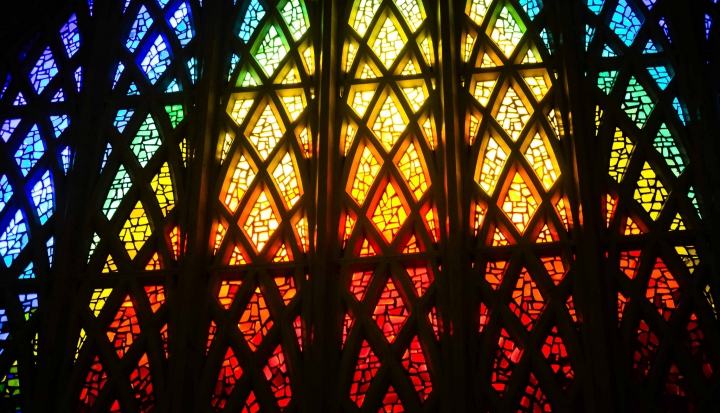 I was visiting missionary friends in Turkana, a remote, arid, and desolate region of Kenya, in the summer of 2001. My friends had asked me to help baptize 40 nomadic women at a distant outstation chapel, about a three-hour drive from the main mission over rocky terrain and river beds that pass for roads. These women were shepherds who tended their communal flock of goats. (The men remained at home to care for the animals.)

Our journey was nothing compared to that of the women and congregation, who traveled for two hours by foot for their baptismal Mass. We were delayed because our jeep overheated. The assembly had already been gathered for an hour and sang hymns while they waited for us.

When I walked into the makeshift chapel, my senses were assaulted. The space—small, enclosed, and hot—reeked with the odor of goat dung. But of course: The women were shepherds who lived closely with their animals in a region where water was scarce. Bathing and laundering were not as frequent as Americans are accustomed to.

The stench almost overwhelmed me to the point of gagging. But I was soon preoccupied with another affliction: swarms of flies! Again I realized that where there was manure, there would be flies. I prayed for the grace to hold on, to focus on the moment that these women had been preparing for for three years, and to not let my discomfort—revulsion, even—betray the joy of their experience.

These Turkana women taught me what it means to smell like the flock. This is a favorite image Pope Francis uses to challenge church ministers and the Catholic community. He summons us to go to those who live on the edges of what religious folks find acceptable. And then he tells us that we cannot be effective bearers of the good news unless we are willing to “smell like the sheep,” that is, unless we are willing to be so intimately a part of people’s lives and endure the hardships they experience. We must be willing to put up with the flies present in their lives and smell like the sheep. These African shepherds gave me deeper insight into the challenge contained in what could be an otherwise comfortable pious exhortation.

I think of Pope Francis’ summons as I ponder the church’s treatment of LGBTQ persons and, most especially, those who have been fired from their jobs because of their sexual orientation.

According to New Ways Ministry, a Catholic ministry for the LGBTQ community, almost 70 workers in U.S. Catholic institutions have been fired, forced to resign, had offers rescinded, or had their jobs threatened because of their orientation since 2010—often after long serving in their positions and known to be gay or lesbian. The organization cautions that it lists only those whose situations have become public; anecdotally, many other instances are also known. I recently addressed about 500 participants at a symposium sponsored by New Ways. I was saddened by so many stories from those who have experienced rejection from their church and also moved by a determination to cling to a faith that too often offers them no welcome.

The Catholic Church’s treatment of LGBTQ persons has become, especially for Millennial Catholics, a litmus test for its ethical credibility and moral authority. Church documents speak about LGBTQ persons. But no official statement or outreach begins by speaking with them and engaging their experiences or those of their families.

Pope Francis’ challenge to smell like sheep then hovers over the church: How can we effectively proclaim good news, much less be seen as credible, if church leadership refuses to smell like the flock? Can we become so familiar with the LGBTQ community’s lives, stories, struggles, and triumphs, even endure their flies, namely, the hostility of those who would ostracize them either out of ignorance or hatred?