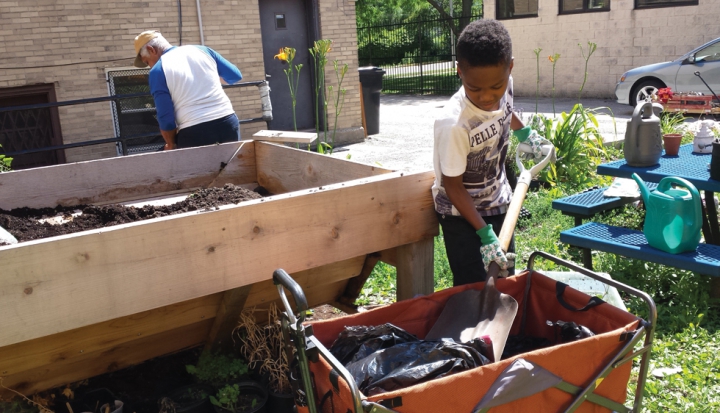 Every week, hands plunge into the earth at St. Benedict the African East Catholic Church in Englewood, a neighborhood on Chicago’s South Side. Around five raised-bed plots and six container gardens church volunteers, police and fire department baseball league players, and various community members pull weeds, plant flowers, and get to know one another.

The “Garden of Eatin’ ” grows tomatoes, kale, peppers, eggplant, and salad greens. The congregation shares the crops and donates the excess to the local food pantry, says Susan Rashad, founder of the parish’s garden club.

“We’ve developed some great relationships with other community organizations,” Rashad says. “It’s been a great thing being able to get out and share the job of doing the work.”

The parish’s garden ministry started in 2014 using a grant from Faith in Place, an organization that empowers faith leaders and their congregations to protect the world through initiatives focused on environmental sustainability. Faith in Place partners with 269 houses of worship throughout Illinois, 62 of which maintain active “Green Teams” and regularly sponsor environmental programming.

“There’s no better way to build relationships than to get out and get your hands dirty in the soil,” says Rev. Brian Sauder, Faith in Place president and executive director and an ordained Mennonite pastor. The self-described country boy from rural Illinois has run the organization since 2014.

Congregations often get involved with Faith in Place through small ­projects—changing a few light bulbs or hosting an educational movie night. For St. Benedict, the garden project was the parish’s first foray into environmental activism. But over a few years those small projects are apt to turn into complete overhauls of heating systems and busloads of people lobbying for clean energy at the state capitol.

This is how movements start—small.

A matter of faith

Faith in Place began in 1999 under the direction of Rev. Dr. Clare Butterfield, a Unitarian Universalist minister. She began wrestling with the idea of how faith-based organizations could get involved with the environmental movement while she was in seminary during the late 1990s. She was working at the Center for Neighborhood Technology as an organizer.

“There is a presence [of environmental justice] in every faith tradition I’ve encountered,” Butterfield says. “People like consistency between thought, word, and deed.”

Butterfield began meeting with various faith leaders, asking what care for creation meant in their religious tradition. She worked with the leaders using insights from their conversations to establish simple steps to be more environmentally friendly. Food, water, and energy were common ideas, she says.

“What we hoped to do was provide some ­simple paths to engagement,” she says. “I had no idea what the reception was going to be. It was the most overwhelming warmth and hospitality that I’ve ever experienced, and I continued to experience it year after year.”

The process of joining Faith in Place begins when an outreach coordinator meets with religious leaders to identify three to five people from a congregation who are passionate about environmental justice and some of Faith in Place’s program wings—energy and climate change, sustainable food and land use, water preservation, and advocacy. These local members create a “Green Team,” planning small projects to involve members of their congregation and raise awareness before moving on to more difficult projects.

“We view [environmental] problems as local and as injustices in the community,” Sauder, Faith in Place’s president, says. “When we look at those problems from a very local, justice lens, the solution is to hire from within that community someone who’s trusted with the faith community and to walk alongside an already gathering group of people.”

At St. Benedict, Rashad learned about Faith in Place through her statewide Master Gardener’s club meeting. A grant from the organization helped the church start a garden project. The St. Benedict club now has more than 20 members.

Meeting congregations where they are

For that reason, Faith in Place focuses on working with members of each congregation to help them meet their specific needs in whatever way they can. They provide educational resources, infrastructure, and grant funds to churches, like they did with St. Benedict. Last year the organization helped 15 houses of worship grow native plant gardens using starter plants and hosted informational workshops. They rely on local church members to implement the projects, which ensures that projects address important community needs, instead of an outside group dictating what is best for a congregation, Sauder says.

For another Illinois parish, Ascension Catholic Church in Oak Park, this meant focusing on landfill reduction rather than gardens. The HOME Green Team (Honoring Our Mother Earth) received grant funding from Seven Generations Ahead to create a Zero Waste program at the parish school. New recycling bins were placed around the building and children were trained as Zero Waste Ambassadors to spread the message to other students, says Gina Orlando, Ascension HOME Team coordinator.

Food scraps were turned into compost, helping to lower the amount of landfill material in the trash from 83 to 15 percent. The goal for 2017 is to reduce landfill material to 10 percent at the school of 450 elementary and middle school students. The children’s enthusiasm for tackling these kinds of sustainability goals is encouraging, Orlando says.

“When you have environmental discussions with kids, it’s just a delight,” she says. Children also carried the messages home, encouraging their families to compost and recycle. The HOME Team, which consists of almost 30 members, made sure the project’s results were printed in the weekly bulletin. Ascension is working on becoming a Zero Waste parish, Orlando adds, although adults and church leaders have more demands on their time and energy. Sustainable practices often take a back seat to other church or personal needs.

Getting local leaders on board also addresses one of the most pressing needs in the environmental movement: diversity. Green 2.0, an organization dedicated to boosting diversity in the movement, surveyed 191 nonprofits, 74 government agencies, and 28 grant foundations for racial diversity. The group reports that people of color—who make up more than one third of the U.S. population—account for less than 16 percent of the staff surveyed.

Faith in Place tries to overcome that discrepency by creating community. Many hands make light work, the saying goes, and if people sense they are part of a larger movement, they are more likely to engage for fear of missing out. Faith in Place works to show how individual actions yield tangible results, Sauder says. Measuring the impact of the program on one’s faith is more difficult, although Sauder said he is continuously inspired by seeing people of different faiths working together.

One way Faith in Place fosters this feeling of togetherness across denominational lines is through its winter farmers markets. Frigid temperatures and harsh winds make hosting traditional outdoor farmers markets impractical. Produce at supermarkets is often more expensive during the season, too. So the organization hosts a series of winter markets to ensure local communities have continued access to produce and other goods.

“Our end goal is to bring fresh, local food into neighborhoods in the off-season and also help vendors out in these less busy times,” Persson says. “It’s a good way to not only help out the vendors but also open up these houses of worship to people who may not otherwise stop by.”

Since the Faith in Place indoor markets began in 2009, they have provided needed products for communities and brought people to a place of worship they might not otherwise visit. Hundreds of people may stop by on any given weekend, Persson says.

While Faith in Place plays an important role in uniting people of faith across denominational and congregational lines, its programs also unite people within the same parish. Back at St. Benedict, Faith in Place hosted a “Migration & Me” story circle where members gathered to discuss their own physical journeys and their relationships to the earth, food, and environmental stewardship. These kinds of story circles reveal common needs and a common background among members.

The program focuses on the idea that each person has a story of migration, whether it is their own or one inherited from family history. During the sharing sessions, storytellers recall family traditions and special foods. They honor the people who helped in their journeys and reflect on how the process affected their faith. They connect their family and personal migrations to the migrations that happen in nature.

“The migration story really touched our members because we all migrated from different churches to build our church in the first place,” Rashad, the founder of St. Benedict’s garden club, says. “It’s a very painful process when you’re a faithful person and your church is closed.”

The feeling of living without a church home remains present in the minds of many St. Benedict members. The current church was founded in 1990 to address a wave of parish closings in Chicago’s Englewood neighborhood. What later became St. Benedict the African East is a consolidation of five churches in the area’s east side.

“Our story was a migration from one church to another church,” Rashad says. “It was nice to hear all the stories about how their faith was so strong to get all the parishes together.”

The migration story circle helped members unpack the pain and uncertainty of being in a new place. When starting a new church “you need the same support systems that you had when you left. You need the same environment and community when you get where you’re going,” Rashad says.

The vulnerability shown by speakers and church members brought the group closer and created a shared sense of belonging, Rashad says. Church members were better prepared when the east and west locations of St. Benedict were combined late last year. And they were given the chance to listen to each other’s pain and to connect this to the gardens outside.

The Migration & Me leader helped the group draw connections between their own migration stories and the migration of birds and monarch butterflies. It inspired the participants to create a natural habitat of their own to aid these local species, many of which live in habitats threatened by ongoing urban development.

Just outside of the church, in the middle of the parish’s gardens, the “Monarch Waystation” supports the natural migration of monarch butterflies. Milkweed, zinnia, and various shrubs attract the insects and offer them a place to rest and refuel on their journey. Faith in Place connected St. Benedict to Chicago’s Field Museum, which helped the garden club find and grow native plants to attract the butterflies.

The monarch garden has “been an attraction for some of the children in the neighborhood,” Rashad says. She adds that it is not uncommon for families to gather near the garden to see the butterflies. Some are church members, but most are not. They have come to marvel at the butterflies, gaze at the flowering plants, and learn a bit more about the world around them. The garden, Rashad said, “is a public space for us.”

A butterfly garden that welcomes in community members may seem small, but that is how Faith in Place started this entire movement. They started small and with patience watched the connections grow—between parishioners and between churches, the community, and the planet.