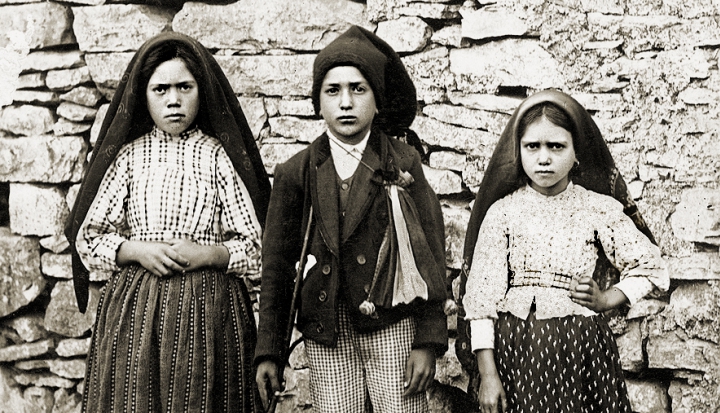 In the spring of 1981 my family boarded a plane and took a 15-plus-hour flight from our hometown in Grand Rapids, Michigan to Lisbon, Portugal. I was 7 years old and cannot remember the long flight or how my brothers and sister and I amused ourselves for its duration. I don’t remember my first time arriving in a foreign airport or waiting for the luggage my mom packed for our family of six to tumble onto the conveyor. Nor do I remember my dad loading all of us onto the bus that would drive the hour and a half toward our final destination of Fatima, where we would visit the site where Mary appeared to three young shepherd children in 1917.

My first memory of our Fatima pilgrimage is the rows of muddied, once colorful shacks in the mountaintop villages that flew by our bus windows as we travelled along the highway. I was an American kid firmly planted in middle class comforts. Poverty was the stuff of brochures handed out by missionary sisters asking for donations. For the first time, it was right outside my window. I motioned to my sister seated next to me to look at the children dressed in rags waving from the dirt streets where laundry lassoed from ropes connected the shacks. As the bus slowed, I waved back, then tucked my hands back into the sleeves of my lavender windbreaker, unsure of what else to do with them.

Over the next hour, muted dingy shacks gave way to simple white houses as we made our way into the small town of Fatima. The bus dropped us off in front of Domus Pacis Fatima Hotel, an impressively large retreat hotel adjacent to the Sanctuary of Fatima. My sister and I were excited to share a room. After checking in, we ran to our rooms and chose between the single beds in the sparsely decorated room, then ran around the giant hotel, feeling at home among our fellow pilgrims whose rosaries loosely wound around their fingers much like our mother’s.

The following day we piled back on the bus on our way to where the Angel of Fatima first appeared to Lucia and her two cousins, Jacinta and Francisco, one year before Mary appeared to them at Cova da Iria. Standing on the outskirts of the rocky terrain, we recited the Angel of Fatima prayer: “My God, I believe, I adore, I hope, and I love you. I ask pardon of you for those who do not believe, do not adore, do not hope, and do not love you.” Instead of focusing on the prayer, I gave my attention to the giant boulders surrounding the statues of the three children and the angel. I was obsessively interested in the children themselves because I wanted to be like them, worthy of a visit from Mary. How did they manage to bring their sheep across all those rocks, I wondered. Did they take turns leaping from rock to rock, calling to the sheep and guiding them toward even footing? Were they scared when the angel appeared? I looked over to my sister, three years my senior, wondering if she was thinking the same things. She did not look back at me. Her eyes were on the angel and she appeared deep in prayer.

The next few days were a blur of chapels, gift stores, and larger-than-life Marian statues. Midweek there was a citywide rosary procession where I became lost in the crowd, floating along strangers without the security of my family for the first time in my seven years. Maybe this is my path to sainthood, I thought. Maybe this is where my hagiography begins. Maybe I will be swallowed by this city and move in with some impoverished family, proving my humility by accepting this new life and living only for God. I alternated between panic and peace until ahead of me I saw my oldest brother, chosen as one of the four who hoisted the statue of Our Lady of Fatima at the front of the procession. I was not lost after all and kept my eye on him as the procession continued toward Rosary Square.

I was most eager to visit the actual apparition site at Cova da Iria, as I felt it held the key to understanding the three children. I felt like I understood Francisco, the one who had convinced his cousins to only say the names of the prayers rather than the whole prayer in order to get through saying the rosary faster. In our house 4,000 miles away, we had a designated rosary room where my family gathered to say the rosary every night. The 15 minutes the rosary recitation stole from my summer playing felt like an eternity. I connected deeply with Francisco’s desire to speed things along. If his lazy prayer was good enough, could Mary appear to me some day? Or was it his humble life as a shepherd that made him a witness to the Miracle of the Sun? Did I need to acquire some sheep?

In the way that an eventual struggle with quicksand feels like an absolute possibility when you are young, sainthood felt like an absolute possibility for me. It was just a matter of when. Whether I admitted it or not, I treated our pilgrimage to Fatima as an investigation into how to become a child saint. Before our trip, I spent hours poring over a black and white photo of the three children, trying to find myself in their sober faces or veiled and kerchiefed heads. Lucia and Jacinta looked angry. Jacinta struck a particularly formidable pose with one hand on her hip, her whole countenance suggesting a longer and more difficult life than her years accounted for. Lucia’s piously crossed hands held at her waist looked appropriately humble, while Francisco’s looser, hands-down-at-his-side stance made it possible to interpret him the most playful of the three. As much as I looked, I could not find myself in any of them. I smiled in almost every picture. My red hair was never covered by anything. Everything about photos of me from this time suggest the easy life of a coddled American. I can find no sainthood in them.

Cova da Iria, the place where Mary appeared to Lucia, Jacinta, and Francisco on the 13th of every month from May to October in 1917, is now the Chapel of Apparitions, an open chapel with a statue of Our Lady of Fatima enclosed in glass at its center. When we arrived, my family knelt on the floor together. I tried to be present in the moment, to hear God calling for me, and to hold the air and the miracle of the trip forever as if it were itself possible of being encased in glass. Looking at pictures of the site now, I admit I have no recollection of the Chapel of Apparitions outside of the coarse, jute rug that bit into my knees as we knelt to prayer. I couldn’t help but wonder why they didn’t have soft kneelers for the travelling pilgrims.

On our last day, our tour bus brought us outside the home of Jacinta and Francisco Marto. It was a small, humble home with white stucco on one side and uneven fieldstone lining its back. A man walked in front of the house and our bus driver mentioned this was perhaps a relative of the Marto family, an uncle or cousin. This information, along with the fact that the real Jacinta and Francisco shared the same air I was now breathing, was too much for me to handle. It was either this excitement or my inability to heed the advice to avoid drinking the local water that caused my stomach to lurch.

As we exited the bus and approached the Marto home, I tried to hold the sickness back. I didn’t want to lose it in front of the maybe uncle or cousin of Jacinta and Francisco, but the distance we had travelled and the miles I had yet to go made restraint an impossibility. I doubled over and vomited in front of the house, my mother rushing to my side to tidy what she could on that dirt road. The maybe uncle or cousin, for his part, was not bothered at all. He watched impassively and moved on. Maybe he understood my sickness for what it was, an homage of sorts, a deep longing, the raucous discomfort of a young American girl with every creature comfort who knew even then that standing outside the home of those humble Portuguese children was as close to real sainthood as she’d ever get.