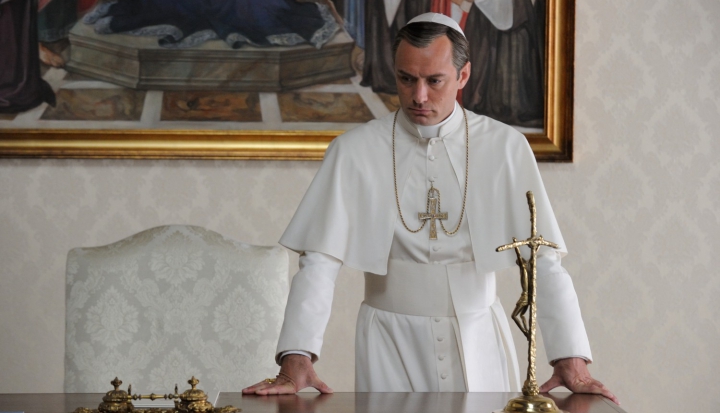 For a show about the papacy, it’s hard to pinpoint the most shocking part of the first few minutes of The Young Pope: The fact that the episode came with a nudity warning that is almost immediately realized; the titular pope emerging from a pile of babies, which later turns out to be part of a dream sequence; or hearing an American pope addressing crowds at the Vatican (especially one played by British actor Jude Law).

But The Young Pope, from award-winning Italian film director Paolo Sorrentino, seems determined to surprise. (The show has previously aired in Italy; it was released to American TV as an HBO limited series, with the first two episodes airing last Sunday and Monday night.) Law plays Lenny Belardo, the recently elected pope who has assumed the mantle of Pius XIII. As you might have guessed from the show’s title: he’s young, a mere 47 years old. (The show winks at viewers as one cardinal replies when reminded of the pope’s age: “That’s young.”)

The other cardinals hope that because the pope is inexperienced, he will easily bend to their will, particularly the agenda of Secretary of State Cardinal Voiello (Silvio Orlando). But, the young pope has a very different idea. “There’s a new pope now,” Pius declares as he lights a cigarette, flaunting John Paul II’s real life no-smoking-in-the-Vatican rule. He spurns the suggestion of a hand-picked special advisor; instead, he brings in Sister Mary (Diane Keaton), the nun who raised him, to fill that role. Cardinal Voiello wishes Pius would focus on his first homily or start thinking about a topic for an encyclical. Instead, Pius lists his top priorities as boosting the Vatican radio signal, creating ample space for all the gifts he will receive, and buying back a papal tiara.

The Young Pope will not disappoint fans of high-prestige TV drama, as intrigue and deception are taken to the halls of the Vatican. The show presents a sort of fictional behind-the-scenes look at the inner workings of the Catholic Church, in which the pope sits in on marketing meetings. But rather than statements about Catholicism, religion, or theology, the show’s main commentary is on power.

While not so much a commentary on the current United States political landscape, but the timing of its American release–the week of the presidential inauguration–makes it easy to view within this context. The Young Pope portrays a hotly contested leadership transition, tinged by senses of regret and the possibility of an unchecked powerful leader pushing a potentially unpopular set of priorities. “Did you vote for me in the conclave?” Pius, a ruthless manipulator, asks the prefect for the Congregation of the Clergy in one scene. The second episode ends on a doomsday note as Pius, finally delivering his first homily, concludes by turning his back on the masses, saying, “I don’t know if you’re worthy of me.”

In this light, it’s also fascinating that the show exists in the age of Pope Francis—a pontiff well known for his humble lifestyle and personality. The fictional Pope Pius XIII expectantly places his hand out to be kissed. He self-identifies as intransigent, irritable, and vindictive—three adjectives that are hard to imagine ever being applied to Francis. Just last week, Pope Francis reminded us that Christ’s humility as a servant was what gave him authority. “He was at the service of the people. He had an attitude of a servant,” Francis said. Francis has certainly modeled himself as a humble servant; Pius is anything but.

And yet, the show is not dark. It’s beautifully shot, with a soundtrack that often keeps the feeling light and airy. There are laughs; there is even a kangaroo. The show doesn’t take itself too seriously, even if its main character definitely does. If nothing else, it’s likely worth keeping an eye on The Young Pope as we transition to a new president and continue to be served by a humble leader of the church.