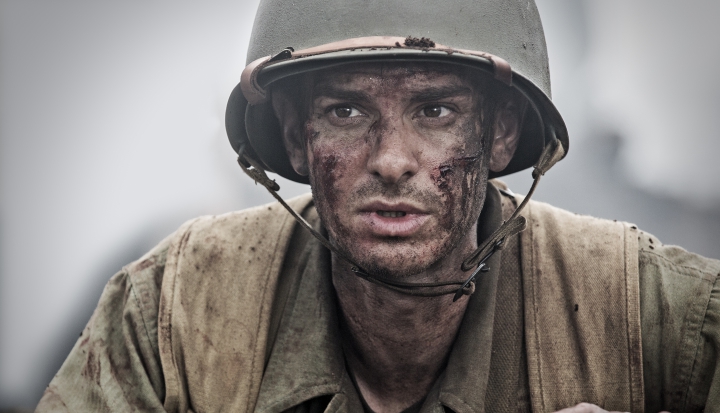 Based on the life of the World War II medic and conscientious objector who pulled 75 injured soldiers to safety during the Battle of Okinawa, Hacksaw Ridge chronicles Private Desmond Doss’ (Andrew Garfield) unwavering refusal to carry a weapon into battle. Doss’ objections stem both from his Seventh-day Adventist faith as well as growing up with a violent, alcoholic father (Hugo Weaving) who was severely traumatized by the violence he witnessed fighting in World War I. Still, compelled to serve, Doss joins the army. We watch him struggle to convince both his superiors and fellow soldiers that his insubordination is an act of conscience rather than cowardice or fanaticism.

Hacksaw Ridge does suffer from a few war movie clichés. Grenade pins get pulled out with teeth. Bullets fly through the air in dramatic slow motion. All of the lines in Japanese are yelled. There is also an elevated level of gore. Still, in a movie where the protagonist’s heroics involve the hardships he will endure not to vanquish the enemy, but to save the desperately wounded, the graphic depictions of injuries are completely appropriate.

The central moral question of the movie, though, is handled with a mercifully light touch. We see Doss’ beliefs in action, rather than hear lectures about beliefs and values. This likely is thanks to the humble, gentle nature of the real-life Desmond Doss, who is shown in documentary footage at the end of the movie. The prayer he offered as he single-handedly rescued soldier after soldier, lowering them down a sheer cliff face to safety, was that God would allow him to save “just one more.” In an age when questions of conscience and religious liberty are often blasted through courtrooms and internet forums, that simple, quiet prayer, and the extraordinary actions it inspired, speak volumes.

TagsTV and film War and peace