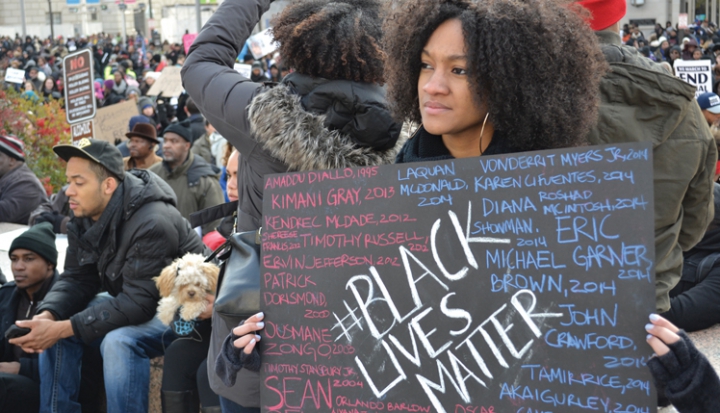 Recently, Fordham University sponsored an interfaith prayer service for racial justice. The catalysts for this event were the ongoing police-involved killings of Black persons—mostly unarmed men—in our nation.

I preached a homily in which I recalled a talk I had given, where I had spoken of the challenge to a Christian conscience in the aftermath of the deaths of Trayvon Martin and Michael Brown and Eric Garner and “. . .”

Most haunting in the title of that talk were the “. . .” The scandal that brought us together was the realization that to the roster of cities such as Ferguson, Cleveland, Milwaukee, and Chicago we now must add Baltimore, Tulsa, Minneapolis/St. Paul, Baton Rouge, San Diego, and “. . .”

The never-ending tragic litany leaves my soul weary, numb, and tempted to despair over the incessant loss of life despite the protests, petitions, and prayers.

Whenever I write about this issue reactions are highly critical, some of which contend that I show a lack of appreciation for the service police officers render to society. Pondering such reactions has led me to two realizations.

First, many people are unable to distinguish between supporting professional and fair-minded police officers and criticizing a broken and unjust system of police practices and training. Yes, we can and must support those who heroically perform the difficult profession of public safety. But we also need to be critical of policing that subjects citizens of color to surveillance, interrogation, arrest, and abuse that would be considered intolerable if routinely experienced by white people.

The U.S. Department of Justice found in its investigation of police departments across the nation “patterns and practices” of racially discrimi-natory behavior that violate the constitutional rights of citizens of color.

Despite this objective evidence, and the many studies that show how Black and white defendants are treated very differently in the criminal justice system even when charged with similar crimes, there is still pervasive denial on the part of many whites.

My second realization has been that there is no way to speak honestly about race without making white people uncomfortable. It is not difficult to understand why. The categories of “black” and “white” justify unequal access to jobs, neighborhoods, and schools. Race in America is about the rationalization of social inequality, especially white preference and dominance. That level of honest acknowledgment is something for which many are unprepared and a conversation for which this nation is ill equipped.

White Christians, then, are not disposed to believe the evidence and hear the testimonies of their Black sisters and brothers. The body of Christ not only bears the racial wounds of the larger society; in some ways, it is also even more scarred and wounded.

All this underscores how remarkable the prayer service at Fordham was. Such prayer needs to take place in churches and chapels across our country. It is a necessary first step as we implore God’s help to overcome what the U.S. bishops call a “radical evil” that destroys lives and mocks the image of God in which we are all created.