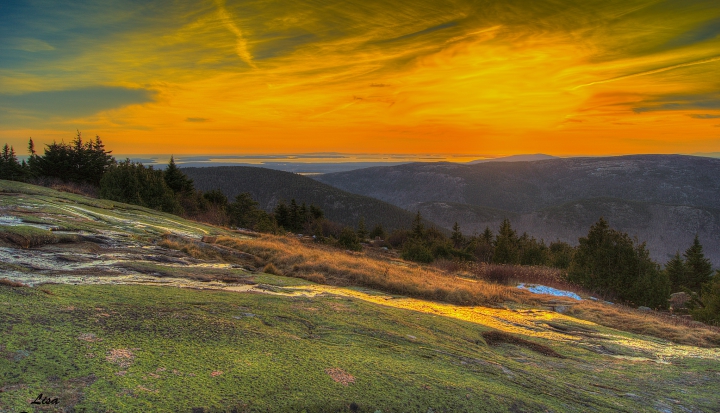 The first glimpse of sunrise in the United States each day comes atop Cadillac Mountain in Acadia National Park in Maine. From the highest point on the East Coast, the salt air brims with possibility and floods the senses with magnificent beauty. The movement of one large glacier formed this landscape from Maine down to my own home on Long Island, New York. I recently visited Acadia, and as I looked out from Cadillac Mountain, I was overcome with gratitude for this public space.

Created in 1916, the National Park Service celebrates its 100th birthday this year. With its 58 parks and hundreds of national historic sites, the National Park Service protects and curates natural spaces and the many stories of America. In 1934 President Franklin Roosevelt argued “there is nothing so American as our national parks.” These parks remind us “that the country belongs to the people” and that they are “for the enrichment of the lives of all of us,” he said in a radio address broadcasted from the heart of Glacier National Park in Montana. In these spaces, FDR hoped that we would see the public good and embrace our participation in the common good.

The parks have much to teach us. Nature reveals the interdependence of everything. Pope Francis has called the climate a common good, but, at their heart, national parks teach us about community and our relationship to nature. Acadia’s hiking trails were designed and built by the Civilian Conservation Corps as part of FDR’s New Deal. The purpose was not just to provide paychecks but also to invest in the public good. As I climbed an 80-year-old granite staircase and scaled rocks aided by a walking stick borrowed from a fellow hiker, I saw the wisdom in FDR’s vision. These public spaces call us to be one community of diversity, beauty, and sometimes pain.

A cornerstone of Catholic social teaching, the common good often seems vague. In this polarized and intense election season, I look to the National Park Service to help refocus our attention on the common good.

First, the common good is not utilitarian; our social teaching rejects “the greatest good for the greatest number.” Instead, it embraces the dignity of every person. The good of each is necessary for the good of all. This delicate balance of inclusion and interdependence is revealed in the ecosystems protected in our parks. And as Pope Francis reminds, we are a part of those ecosystems—not separate from them. The National Park Service offers all fourth graders’ families a free park pass for a whole year. The goal is to make participation communal. These are our spaces and our historical sites.

Second, the common good is a process and a destination. Through participation in the community, we work together for greater justice, equality, and inclusion. That process can be difficult and painful. Over its history, the National Park system reveals America’s failure to treat Native Americans and African Americans with justice. In 2016 these stories are finally emerging, making the common good more possible. In Salem, Massachusetts, while learning about the birth of global trade in the new United States, our interpretive ranger made it clear that slavery was not limited to plantations in the South. In Glacier National Park, where FDR made his famous radio address, members of the Blackfeet Nation share their stories. The common good is a matter of reality—not naïve optimism or ideology.

This election season has brought deep divisions to the surface. Yet in 2015 more than 300 million people visited a national park or historic site. Two hundred and twenty-one thousand people volunteered. Democracy only works when people participate. We need to work together for greater justice in society. As I looked out on Acadia with my fellow hikers, I found hope.