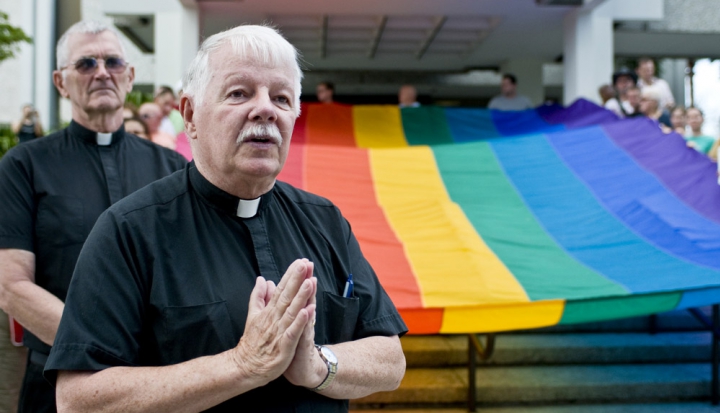 In February I participated in a panel on transgender Catholics at the Los Angeles Religious Education Congress called “Transgender in the Church: One Bread, One Body.” Almost 800 people attended this session, which testifies to the intense interest that this issue raises in both our society and the church.

The main presenters were a young man and young woman, Mateo and Anna. Their powerful stories of their struggles over realizing the deep disjunction between their birth bodies and their inner sense of being a man or a woman were heartbreaking and inspiring. Both also movingly related how their “transition” into their transgender bodies was a faith journey as well. I was struck by their heartfelt conviction that accepting their true gender identities led them to a deeper and more authentic relationship with God. Hearing their stories of pain and triumph was one of the most privileged moments I have had in 33 years of being a priest.

My brief contribution to the discussion centered on answering the question, “Why am I here?” That question was posed by relatives and friends who wondered about why I would “put my reputation on the line” by being associated with such a stigmatized group. As one put it, “Don’t you get into enough trouble talking about race? Why take this on, too?”

Space does not allow me to give my full response. But one reason why I chose to be present is because I have a lot to learn. To be blunt, I was at the panel precisely because of my ignorance and discomfort. Transgender issues were never addressed in either my moral theology courses in the seminary or in my graduate studies in Christian ethics. I—and most priests—have not been trained to specifically minister to transgender members of our parishes or to the concerns of their families.

My personal ignorance is also shared by the church as a whole. There is much that we do not understand about what is technically called “gender dysphoria,” or the lack of congruence between one’s physical body and gender identity. This ignorance leads to fear, and fear is at the root of the controversies in today’s so-called “bathroom wars.” And there lies a major challenge that transgender people endure and that the faith community has to own: the human tendency to be uncomfortable and fearful in the face of what we don’t understand. It’s easier to ridicule and attack individuals we don’t understand than to summon the patience and humility to listen and to learn.

But despite all that we do not know, this much I do believe: Jesus would be present to, among, and with transgender persons. Jesus spent his life eating with the “wrong” people of his society, that is, with questionable women, lepers, tax collectors, and outcasts. Jesus protected a sexually shamed woman from stones hurled by religious people. Jesus taught that we would be judged by the measure of our compassion for the despised and disdained.

It is our Christian conviction that all lives are sacred; thus, no life is less valuable than any other. It is a very simple conviction, yet one that carries radical implications. It confronts our human tendency to devalue and exclude those whose way of life seems foreign, strange, unfamiliar, or even wrong.

During Pope Francis’ visit last fall, he repeated on at least five occasions: “Jesus never abandons us.” This is the deepest reason why I chose to be with Anna and Mateo, who spoke so eloquently for so many of our transgender fellow Catholics. Jesus does not abandon us. If we claim to be his followers, we cannot abandon them.

Our faith teaches that we can act with compassion even when we do not fully understand. Our faith also gives us a challenge—namely, that compassion is not worthy of the name if we offer it only to those with whom we are comfortable.