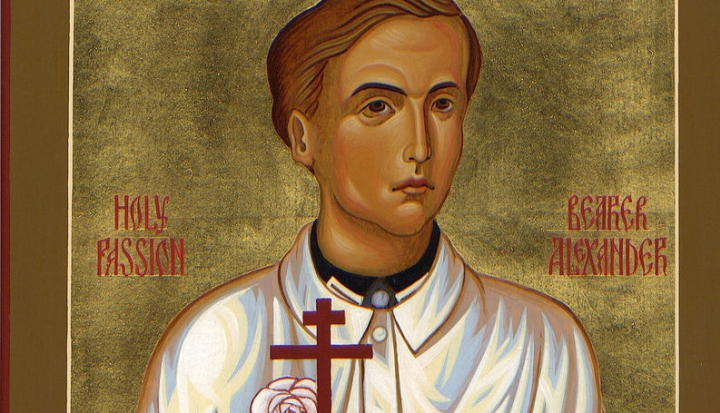 “I’m convinced that my life has to end now, early as it seems, because I have fulfilled my life’s mission. I wouldn’t know what else I have to do on this earth.”
—Alexander Schmorell’s last words, July 13, 1943

One of the lessons I learned early in life, while part of the Catholic Worker community in New York, is that fear plays a huge role in most of our lives most of the time, shaping decisions large and small. One of the reasons for paying attention to the lives of saints, I learned from the leader of the community, Dorothy Day, is that their example helps us keep fear from being dominant.

Among saints of modern times who show what a life free of fear looks like, I can think of few examples as challenging as Alexander Schmorell, a young man who died for nonviolent resistance to the Hitler regime. On an icy weekend in February, my wife and I stepped off the train in Munich to take part in his official canonization at the local Orthodox cathedral.

In the spring of 1942, while a medical student at Munich’s Maximilian University, Schmorell co-founded an anti-Nazi group that christened itself the White Rose. The inspiration was a passage in Dostoevsky’s novel The Brothers Karamazov, in which a white rose serves as a symbol of resurrection. The founders’ inspiration was their Christian faith. Schmorell belonged to the Russian Orthodox Church; the other two founders were Lutheran (Hans Scholl) and Catholic (Willi Graf). It was high-wire ecumenism in the midst of war.

Before long several others joined—Christoph Probst, Kurt Huber, and Hans Scholl’s 21-year-old sister, Sophie. Today it would be hard to find a German over the age of 12 who wouldn’t recognize the names of the six core members of the White Rose. Schmorell is the first to be formally named a saint.

What the White Rose members did was simple but astonishingly dangerous: They wrote, mimeographed, and distributed a series of leaflets that called on ordinary people to resist Nazism.

How did six students find the courage not only to open their eyes so widely to the hell which Germany had become but to decide to risk their lives to call on Germans to take part in the resistance?

Partly it was thanks to a brave sermon given by August von Galen, the Catholic bishop of Münster, in which he denounced Aryan racism and the Nazi euthanasia program that resulted in the killing of those regarded as unfit or unproductive. “These are men and women, our neighbors, our brothers and sisters!” said von Galen. “If one adopts and puts into practice the principle that men are entitled to kill their unproductive fellows, then woe to all of us when we become aged and infirm!”

Clandestine distribution of this sermon was the first White Rose action. (Von Galen spent the rest of the war under house arrest, marked for execution following the anticipated Nazi victory. In 2005, he was beatified by Pope Benedict XVI.)

The group’s second leaflet contained the only known public protest by any German resistance group specifically against the Holocaust: “By way of example we cite the fact that since the conquest of Poland 300,000 Jews have been murdered . . . in the most bestial way. Here we see the most frightful crime against human dignity, a crime that is unparalleled in the whole of history.” (In light of the final death toll, the estimate of 300,000 seems relatively small.)

Theology figured in their texts. “Every word that comes from Hitler’s mouth is a lie,” declared the fourth leaflet. “When he says peace, he means war, and when he blasphemously uses the name of the Almighty, he means the power of evil, the fallen angel, Satan. . . . We must attack evil where it is strongest, and it is strongest in the power of Hitler.”

There were six White Rose leaflets in all. With each new leaflet, circulation widened. They were sent in small batches from widely scattered post boxes. To get the leaflets into Austria, Schmorell made train trips to Salzburg and Vienna.

For nine months Gestapo efforts to find those responsible for the leaflets failed. It was only on February 18, 1943, as Sophie and Hans were leaving copies of the latest leaflet at their university, that they were spotted by a custodian and the Gestapo was summoned. Christoph Probst’s arrest quickly followed. Four days later the three were tried and beheaded. Probst was baptized a Catholic hours before his death. The three others were caught and guillotined between July and October.

At Schmorell’s canonization, the icon carried into the church showed him as the tall, brown-haired young man he was, wearing the white robe of a physician with a Red Cross arm band, his left hand raised in a gesture of greeting, the other holding a thin blood-red cross with a white rose. He is standing against a pure gold background representing eternity and the kingdom of God.

“This difficult ‘misfortune’ was necessary,” Schmorell said in his last letter to his family, “to put me on the right road, and therefore was no misfortune at all. . . . What did I know until now about belief, about a true and deep belief, about the truth, the last and only truth, about God? Never forget God!!”

We live in a time when fear is being sold every minute, every day of the year. (Where would the “war on terror” be were we not prisoners of fear?) But the pilgrimage to Munich to honor a saint who had freed himself from the tyranny of fear gave me an injection of pure courage.