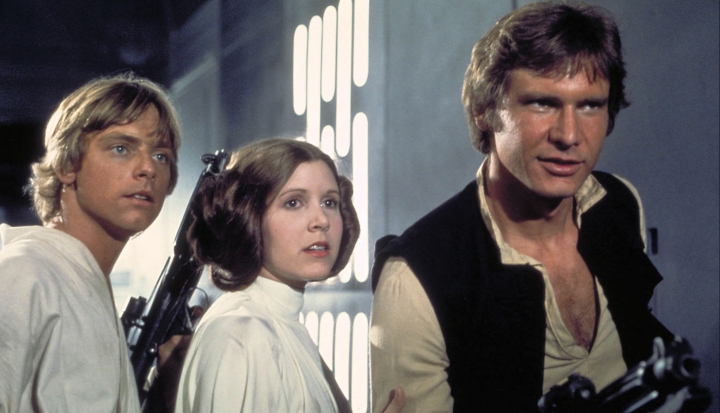 The first Star Wars film came out when I was just a year old. I have a sentimental attachment to the franchise, but my 10-year-old daughter is the real deal: a full-on Star Wars nerd like Liz Lemon in 30 Rock. My little girl with freckles and braids knows Chewie speaks Shyriiwook and she routinely refers to her brother as a Kowakian monkey-lizard.

We watched the original trilogy together for the first time the winter she turned 8, trapped inside during a polar vortex. The familiar characters comforted me—snickering, cocky Han Solo; whiny Luke; and above all, tough and beautiful Leia, the real brains behind the trio. I loved watching these fixtures of my childhood become a part of my daughter’s imaginative world, where they could live on, immortal, ageless, and unchanged as the heroes of any myth or fairy tale.

But when we went to see Star Wars: The Force Awakens on opening night, we were completely unprepared for what we saw.

Our heroes had gotten old.

A significant plot twist made me audibly gasp, but when I cried, it was a raw emotional response to seeing those beloved characters for the first time in 35 years—and finding them so changed.

When we left, I was still emotional. “Wasn’t it awesome?” I asked my daughter. But she shrugged and quickly changed the subject. I worried. She’s sensitive and a nonstop oversharer, just like me. But she doesn’t like to talk about anything that truly disturbs her. I thought maybe the violence had been too much for her and regretted taking her to a PG-13 movie. But on the way home, she confessed her concern wasn’t that at all.

“I just liked them better when they were young,” she said.

My heart cracked a little.

She and my 5-year-old son asked to watch the old movies immediately after we got home. It was as if they were seeking an antidote of some sort, wanting to un-see what they’d just seen.

My kids are young and they want their heroes to be ageless, immortal. My son asks me sometimes, when I’m putting him to bed, if I will ever get old. He tells me he doesn’t want me to go gray. He doesn’t want me to be a grandmother. I know what he’s really saying, of course, and I wish I could reassure him that I’ll live forever.

Instead, we huddled together on the sofa and turned back time to restore Han, Luke, and Leia to eternal youth.

Meanwhile, I’d felt a strange joy in seeing these beloved characters aged and transformed. I could imagine all too well how the years of guilt and solitude might have made Luke quiet and etched his face with scars and pain. How Han’s failings made him buffoonish and maudlin, less cocky, if no less sarcastic. And, especially, how Leia might have grown cold and imperious and reserved, even stilted, in her speech and manner.

Maybe it’s because I’m turning 40 this year and I’ve lost count of all the gray hairs I’m sprouting, but I’m increasingly interested in older faces, both in life and on screen. Especially those of older women. I watch Downton Abbey not just for the Dowager Countess’ quips, but for the jowls and pockets of Maggie Smith’s face; I’m mesmerized by the way her eyes seem to swim in their sockets. I love Lady Cora’s fine lines and the crepey skin around her mouth. Cousin Isobel, Mrs. Patmore, Mrs. Hughes, Aunt Rosamund—each of the older women is so much herself, not just in character but in appearance, whereas the show’s younger characters seem to pass before my eyes in an indistinguishable blur of taut, flawless skin.

But even more than their faces, I love that these women, particularly in the final season of the show, have become the focus of the narrative—they’ve been given romances and regrets and secrets, while the young and gorgeous Lady Mary’s petulance has become kind of a bore.

I’ve also watched with fascination the Netflix series Grace and Frankie, in which Jane Fonda and Lily Tomlin—both in their late 70s—play frenemies whose husbands, who are long-time law partners, leave their wives to become partners in life, too. Fonda and Tomlin are both impeccably groomed (the word preserved, unfortunately, jumps to mind). But their characters, Grace and Frankie, are unmoored by the dissolution of their marriages. They struggle to reinvent themselves at an age when the world expects them to quietly disappear. “Do I not exist?!” Fonda, as Grace, screams at a supermarket checker who ignores her to tend to a young blonde woman in the next lane.

I immediately thought of how Carrie Fisher lashed out via social media at people who joked and even complained about her appearance in The Force Awakens: “Please stop debating whether I have aged well … it hurts all three of my feelings.” She later referred to her body as her “brain bag” and quipped that “youth and beauty are not accomplishments.”

Maybe it’s no surprise that as I get older I identify more with stories about older women (at least not to anyone but me), and that I rush to the defense of the aging Leia Organa. I’ve grown up, and I no longer need my heroes to be immortal. I’m more inspired by scars, mistakes, and reinvention than youth, beauty, and bravado. I need heroes I can grow into.

But what is surprising is that the entertainment industry—notoriously neglectful of older women—is suddenly dishing them up, and not just as grannies and witches and historical figures, but as complex characters whose stories aren’t yet over.