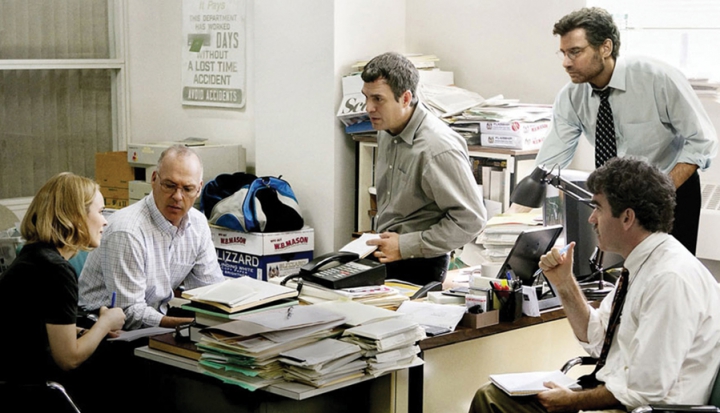 “If it takes a village to raise a child, it takes a village to abuse one.” In the movie Spotlight, those words, spoken almost in passing by a victims’ attorney, Mitchell Garabedian (played by Stanley Tucci), come to carry the main moral weight of the film.
Spotlight depicts the 2002 Boston Globe investigation of sex abuse by priests that eventually led to the removal of Cardinal Bernard Law and initiated a long overdue age of reckoning for the church at large.
But Spotlight isn’t mainly about the church; Cardinal Law himself is only a minor character. Instead, attention is focused on the reporters of the Globe’s “Spotlight” investigative team, the newspaper’s editors, and a handful of prominent Boston lawyers and PR men who helped allow the abuse to continue. In the process, the film raises questions not only about the power of the church but also about the role of journalists in alternately protecting, reflecting, or challenging the values of the community they serve.
The four Spotlight journalists are all lapsed Catholics with deep Boston roots. They are between projects when a new editor, Marty Baron (Liev Schreiber), arrives fresh from the Miami Herald. Baron’s outsider eye is drawn to a Globe column about upcoming lawsuits against the church by a single lawyer representing more than 80 individual victims. He suggests that the Spotlight team take a look.
Spotlight editor Walter Robinson (Michael Keaton) has plenty of reasons to avoid the story. The lawsuit doesn’t have a chance. The plaintiffs’ attorney, Garabedian, is a “real character,” and besides, 53 percent of the paper’s subscribers are Catholic, and they may perceive an investigation as an attack on the church. Robinson may no longer believe himself, but he seems reluctant to spoil the comforts of faith for those who still enjoy them. Baron, however, thinks the paper’s readers want the truth and he orders the team to take on the story.
From there, Spotlight is part journalism procedural. There’s a lot of inside baseball about a lawsuit to unseal documents subpoenaed in Garabedian’s suit and a lot of pre-internet sleuthing done by poring over paper copies of the church directory. But we also see Globe reporters conduct heartbreaking interviews with abuse survivors. Meanwhile, Robinson is cornered by various old school chums and church functionaries urging him to back off the story. After 9/11, one particularly unctuous hack intones, “People need the church more than ever.”
Spotlight reporter Michael Rezendes (Mark Ruffalo) eventually finds a legal work-around that springs some of the documents the church has been hiding. But by then we’ve also learned that the Globe itself may be part of Garabedian’s “village” of enablers. SNAP (Survivors Network of those Abused by Priests) activist Phil Saviano (Neal Huff) is reluctant to cooperate with the Spotlight team because, he says, he gave the Globe a crate of information five years earlier, and they never touched it. Finally, a lawyer who had been helping the church settle abuse cases off the books drops a bombshell. Nine years earlier the attorney had given the Globe the names of 20 Boston priests whose abuse cases he had secretly handled, but the paper buried the story.
In the end, the Globe runs a story that identifies 70 priests who had been on the archdiocese’s conveyor belt from parish to treatment center to yet another parish. Rezendes writes that first story and, in the film, we see him tearing up as he tells a colleague that, despite having wandered from the church, he always told himself that someday he might go back.
Spotlight reporter Sacha Pfeiffer (Rachel McAdams), despite having lost her faith, still takes her aged grandmother to Mass, but after several weeks of interviewing abuse victims, she stops. Still, the pain the abuse revelations causes is the necessary kind, and Baron’s faith in the paper’s readers is redeemed. The paper is deluged not with protests, but with calls from victims who want to tell their stories.
For a while last fall, Spotlight shared space in the multiplex with another real-life story of investigative journalism. Truth, which stars
Robert Redford as CBS news anchor Dan Rather and Cate Blanchett as his producer Mary Mapes, dramatizes that pair’s ill-fated 2004 investigation of George W. Bush’s suspiciously spotty record of Vietnam-era service in the Texas Air National Guard. There was definitely a scandal there, and the CBS team had much of it right, but they also centered their report on four newly discovered letters that purportedly proved the future president had gone AWOL.
When the authenticity of the documents was challenged, CBS brass pulled back. Two document experts raised questions about the letters before the broadcast. The source who had supplied them started changing his story, and suddenly Mapes was fired and Rather pushed out of his anchor chair. Truth, based on Mapes’ memoir, implicitly takes her view that CBS abandoned the journalists to protect corporate interests in Washington.
As it happens, the Boston Globe Spotlight team was also on the Bush National Guard story that year. And, in a recent interview with NPR, Walter Robinson didn’t sound amused by the irony. Rather and Mapes, he said, “ended up discrediting everybody else’s reporting. They had an absolute obligation to make sure those documents were authentic…they didn’t meet that standard.”
If nothing else, these two stories taken together demonstrate that for journalism to successfully speak the truth to power, journalists must take care to nurture the bonds of trust with the community they hope to serve and to influence.
This article appears in the February 2016 issue of U.S. Catholic (Vol. 81, No. 2, pages 38–39).
Image: Courtesy of Open Road Films
TagsCulture in Context Sex abuse TV and film