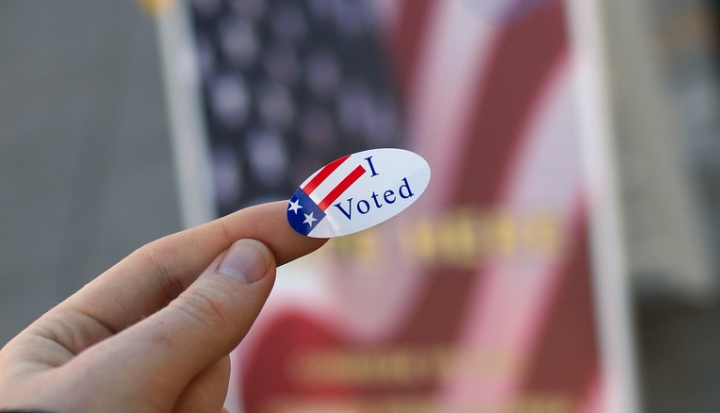 “Father, you need to tell people that they can’t be Catholic and vote for a Democrat for president! And you need to tell them that from the pulpit! People need to be told!” About every four years, I hear something along these lines from some well-meaning Catholic.

More surprisingly, I periodically run across Catholic commentaries—either online or in print—that more or less say the same thing. Although these people at times offer a blanket condemnation of the entire Democratic Party, they usually confine their criticism to a specific Democratic and pro-choice presidential candidate.

But is it true that no Catholic may ever in good conscience vote for a presidential candidate who wants to keep abortion legal?

During the last few presidential election cycles, the United States Conference of Catholic Bishops (USCCB) has put out a voter guide addressing the various issues Catholics should consider when discerning how to cast their vote. The document, Forming Consciences for Faithful Citizenship: A Call to Political Responsibility, is excellent, as I have previously commented upon.

In this guide, the bishops make clear that they “do not intend to tell Catholics for whom or against whom to vote.” While the bishops offer guidelines to help each individual Catholic form his or her conscience, they also explain that “the Church’s leaders are to avoid endorsing or opposing candidates or telling people how to vote.”

While the bishops and other church leaders may certainly challenge your political beliefs, it is not their place to tell you to vote for any particular candidate.  And what is true for church leaders is certainly true for media commentators and the person who sits next to you at Mass. “In the end,” the bishops tell us, “This is a decision to be made by each Catholic guided by a conscience formed by Catholic moral teaching.”

But even given the teachings of Faithful Citizenship, many Catholics question the morality of voting for any politician who does not actively support criminalizing abortion. After all, isn’t abortion a serious intrinsic evil?

Yes, it is. Recognizing the inherent dignity of human life from the moment of conception to natural death is the fundamental principle guiding all Catholic morality. If as the bishops explain, not all moral issues are created equal, how can there be any consideration more important in determining one’s vote than the issue of abortion?

But Faithful Citizenship complicates the matter. The bishops explain that no Catholic can vote for a candidate who supports an intrinsic evil like abortion or racism if that evil is the reason the person is voting. In other words, you can’t intend to support abortion or racism through your vote. However, the bishops go on to say that:

There may be times when a Catholic who rejects a candidate’s unacceptable position may decide to vote for that candidate for other morally grave reasons. Voting in this way would be permissible only for truly grave reasons, not to advance narrow interests or partisan preferences or to ignore a fundamental moral evil.

Therefore, a Catholic can vote for a candidate who is in favor of an intrinsic evil—think abortion or physical or mental torture—if despite that position there are other “morally grave reasons” that outweigh the intrinsic evil.

The bishops make clear that they ‘do not intend to tell Catholics for whom or against whom to vote.’

Later in Faithful Citizenship we read:

A candidate’s policy on abortion—or climate change, economic justice, or any other single issue that Catholics are concerned with—should not necessarily be enough to guarantee a Catholic’s vote. Instead, Catholics must vote with their conscience, whether that means deciding to support a candidate based on their position regarding a single issue, or whether other morally grave considerations result in voting for another candidate. Either way, it’s up to the individual voter to decide.

So what should Catholic voters keep in mind when thinking about how to vote? What are the “morally grave reasons” that could justify voting for a presidential candidate who wants abortion to remain legal? To start, a point of moral distinction: When it comes to politics and voting, we examine the issue of abortion from a governmental perspective. There is a moral difference between what the government actively does and what the government allows to happen.

Catholics must vote with their conscience.

The late Justice Antonin Scalia addressed this moral distinction in a 2002 article for First Things. For example, if a government legalizes the death penalty—which, depending on the circumstance, is possibly morally evil—it is actively making a choice and is thus morally responsible for the lives that are ended through that choice. Abortion, however, is a slightly different issue. In the case of abortion, the government does not actively take the lives of unborn children; it merely does not act to prevent or restrain individuals who have decided to terminate their pregnancy.

Thus, the significant question for Catholic voters is something along these lines: What moral responsibility does the president have for individual women who choose to have an abortion?

As we all know, presidents do not make the laws: the president only enforces the law. The president cannot make abortion illegal. In Roe v. Wade, the Supreme Court ruled that women have a constitutionally protected right to have an abortion, while individual states have the ability to enact restrictions later during pregnancy—as long as these restrictions don’t create an “undue burden” for women seeking abortions (Planned Parenthood v. Casey, 1992). The legality of abortion in the United States is now a matter of constitutional law.

But can the president significantly impact the abortion rate? This is a fair consideration for Catholic voters; in Faithful Citizenship the bishops say that Catholics should consider an elected official’s ability to influence a given issue in discerning their vote.

According to the Guttmacher Institute, the abortion rate has steadily declined since reaching its peak in 1981 under Republican president Ronald Reagan. This decline occurred under George H.W. Bush, Bill Clinton, George W. Bush, and is now at its lowest rate since 1981 under President Obama, despite the differing political parties and pro-life convictions of individual presidents. A Catholic voter could look at this information and reasonably conclude that whatever is affecting the declining abortion rates, it does not seem to be related to whomever is occupying the Oval Office.

But what about the president’s ability to appoint Supreme Court justices who would overturn Roe v. Wade? Republicans have appointed 12 of the last 16 justices, but still the Supreme Court has not overturned Roe v. Wade. For this to happen, a president would need to appoint enough justices to have at least a five justice majority willing to overturn Roe v. Wade. This is complicated; during confirmation hearings, nominees never comment on how they would rule on specific issues that might come before the Court. You can never really know how a nominee will rule until they are already on the bench and ruling. Thus, a Catholic could look at this scenario and reasonably conclude that it is very unlikely Roe v. Wade will ever be overturned.

Additionally, overturning Roe v. Wade wouldn’t actually make abortion illegal; it would merely bounce the issue back to individual states to decide. I think it’s pretty safe to assume that if Roe v. Wade were overturned, some states would have legal abortions available with few or no restrictions, some states would have more restrictions, and some states would make abortion illegal. Probably every woman who still wanted a legal abortion would be able to get one. The exception, of course, is poor women who might not have the resources to travel long distances or across state lines. Would these women then resort to illegal abortions? What would the punishment be for breaking the law?

Again, Catholic voters have a responsibility to consider all this when discerning how to vote. And after considering all of the above, Catholics might believe that a president could have an impact on the abortion rate in other ways—like through economic policy. Even though the overall abortion rate has declined in the past three decades, it has risen by 18% among poor women. Catholic voters might come to the conclusion that the Democratic platform of social and economic aid could help alleviate the conditions that are motivating poor women to seek abortion in the first place.

Even though a particular candidate might want abortion to remain legal, this candidate might also support policies to lessen hunger and homelessness, improve education and healthcare, and strengthen the economy.

This assessment of a candidate’s political platform works in both positive and negative ways: Catholics may come to the decision that one candidate is more in line with their moral beliefs regarding social teachings, while another, despite his or her position on abortion, may stand for other things Catholics consider to be morally unjust and unacceptable. A candidate’s position on the use of torture and war are valid moral considerations for a Catholic voter. As are any positions, actions, or statements that are immoral, reckless, racist, or incompetent.

A Catholic is not obligated to ignore the vast majority of a candidate’s political platform and public behavior and vote solely based on whether he or she wants to criminalize abortion—especially if there’s good reason to believe that said candidate doesn’t have the ability (or the intention) to do anything of the sort.

It is these kinds of moral issues that the bishops are asking Catholics to carefully consider and discern when deciding how to vote. And it is these complicated and varied issues that Catholic voters take into consideration when deciding whether to vote for a candidate based on their position regarding a single important issue. In the end, it is a decision that each Catholic must make according to his or her conscience.