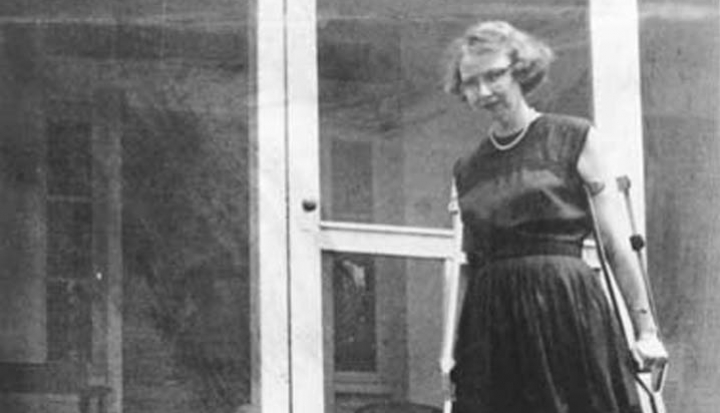 Thirty years ago, the fine theologian John Shea, teaching a course on redemption, introduced me to Flannery O’Connor’s fiction. I found her stories violent, shocking, funny, and awfully readable—but they left me, as a young student without a great deal of real life experience, confused about what exactly the stories had to do with redemption.
These were dark dramas with ugly characters and gloomy endings. There was a lot more Good Friday to these tales than Easter Sunday. For me, a story about redemption ought to have a happy ending. It should not so much be about an escaped con who murders an entire family out on a country drive, or about a traveling Bible salesman who steals a young woman’s wooden leg.
What’s so Christian about this? Before redemption there is sin, Shea explained. You can’t get to Easter Sunday without going through Good Friday. He quoted O’Connor: “Evil is not a problem to be solved but a mystery to be endured.” She has been in my blood since.
A cradle Catholic, Flannery O’Connor dwelled in the depths of the Protestant South for most of her life, living with her mother on her family’s dairy farm in Milledgeville, Georgia. There she wrote her most memorable stories and raised peacocks because the “king of the birds” fascinated her.
She attended Mass daily at Sacred Heart Church in town and traveled to universities to lecture as her fame grew. Her mobility was limited when she was diagnosed with lupus in 1950 at age 25. It was the same disease that killed her father a month before her 16th birthday.
The affliction hardly limited her writing and provided no basis for self-pity. An extensive collection of published personal letters she wrote to friends and literary correspondents reveals what she really cared about—her work—and minimizes her disease with a comical, self-effacing manner.
Working furiously from her deathbed, she completed Everything That Rises Must Converge, a collection of short stories many critics consider her finest work. “I have drug another out of myself and I enclose it,” she wrote a friend on July 15, 1964. Just two weeks later, at 39, Flannery O’Connor died.
Her interest in chickens, and later peafowl, revealed something about the characters she created. “I favored those with one green eye and one orange or with over-long necks and crooked combs. I wanted one with three legs or three wings.” She had an eye for the freak, the monstrous, the twisted—not altogether different from the type of company our Lord kept.
The rural Southern Bible Belt provided a fertile crop of these studies, whom she exaggerated to make her tales come alive. “While the South is hardly Christ-centered,” she wrote, “it is most certainly Christ-haunted.”
The embellishment of her characters did not render them unrealistic, but rather genuine and authentic. Her stories are concrete—über-real. There is an Old Testament flavor to this fiction, and indeed, she remarked, “The ancient Hebrew genius for making the Absolute concrete has conditioned the Southerner’s way of looking at things.”
Unashamedly Catholic, O’Connor found the messy circumstances of human life not void of God’s presence, but the very place where grace often enters. Her work suggests there is more at risk when we turn our heads away from the world, preferring to store our view of God piously elsewhere: “It is where the individual’s faith is weak, not when it is strong, that he will be afraid of an honest fictional representation of life, and when there is a tendency to compartmentalize the spiritual and make it resident in a certain type of life only, the sense of the supernatural is apt gradually to be lost.”
O’Connor did not compartmentalize or sentimentalize or dress up the supernatural in pretty white lace. Her keen and reportedly beautiful blue eyes observed it in the darkest corners of human affairs.
Thirty years of life experience have brought O'Connor's stories into better focus. That grace might find its way into life’s untidy corners is a comfort to me—a broker whose clients have endured two market crashes in the past 10 years; a father whose best efforts with his wife and seven children often fail; a partisan American who too often labels one side completely right and the other wrong.
O’Connor’s gospel gaze would, I expect, see through all of this folly, finding sin just about everywhere and God’s grace not far behind. A portrait of the great writer hangs in my office, looking down on me through those penetrating blue eyes, hopefully spying a trace of grace.
Image: Flickr cc via Will
Tagsbooks and literature Personal spirituality Wise Guides