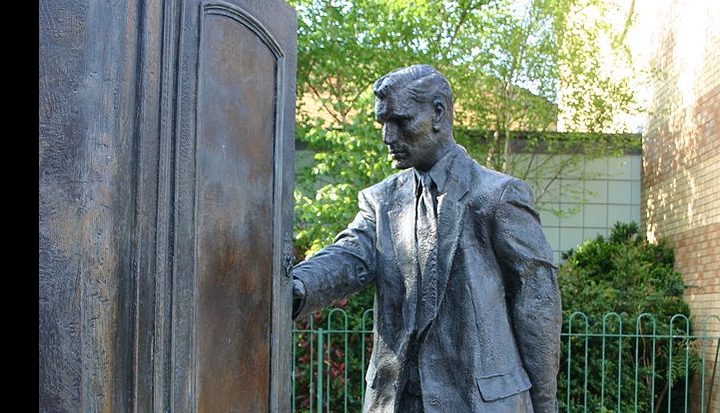 “That’s Jesus, Mama!” shouted my cousin’s exuberant daughter, Claire. Her mother was reading to her not from the gospels, but from the climactic scene of The Lion, the Witch, and the Wardrobe, where a heroic lion lays down his life—allowing himself to be stabbed to death on a great stone table by the book’s villain—in order to save the life of a boy who has betrayed him. At the tender age of 4, Claire thus discovered the significance of the greatest lion of Western literature, C. S. Lewis’ Aslan.
Although Lewis once wrote that he recognized a serious flaw in himself because he did not enjoy the company of small children, he has no doubt been forgiven for this flaw. Children have enjoyed the company of Mr. Lewis ever since The Lion, the Witch, and the Wardrobe was first published in 1950, followed by the other stories of Narnia. The reason for this sustained love is that Lewis transformed the most profound Christian mysteries into fantastic stories which have stirred the imaginations of children like Claire for decades.
Lewis is an author that you can grow up with. I first read The Chronicles of Narnia as a young child, unaided by the piercing theological insights of my young cousin. Nevertheless, as I came to know the gospels a bit better I realized that Lewis had been teaching them to me all along in these stories— though by this time I had moved far enough out of childhood that, had I entered the wardrobe leading to Narnia, I would have found only the wooden wall at its back.
As an adolescent I started looking to another deep, dark place for inspiration. Growing up in Chicago, it was impossible to experience the night sky in its full glory. Nonetheless I stood in awe of the changing moon, circling stars, and drifting planets. Like other children brought up on a steady diet of Star Wars, I was fascinated by the possibility of life in a world beyond our own. Did Vulcans require their own version of Jesus, like us in all things but pointy ears? Did Christ come to Krypton?
I didn’t know at the time that Lewis had already explored my seemingly childish question in his own space trilogy. In Perelandra, the aptly named Dr. Ransom travels to the planet Venus, where he attempts to save the inhabitants of this Eden-like planet from their own fall from grace and the clutches of the demonic Professor Weston.
Born in Belfast in 1898 (he always saw himself as Irish), Clive Staples Lewis taught at Oxford and Cambridge in medieval and renaissance English. He belonged to the informal literary society known as the Inklings, which included The Lord of the Rings author J. R. R. Tolkien. Though many know him only through his fiction, Lewis also wrote poems, essays, and works of Christian apologetics.
“Christianity, if false, is of no importance,” he wrote, “and if true, of infinite importance. The only thing it cannot be is moderately important.” This was something Lewis had to learn. Though raised as a nominal Christian, he soon lost whatever faith he had and spent his young adulthood finding a path back to God. Through the encouragement of close friends such as Tolkien, a Catholic, Lewis found the God “whom I so earnestly desired not to meet,” converting to Anglicanism in 1931.
This lost-and-found approach to God allowed him to view the faith from a long ways off, giving him a very broad view of Christianity as a whole. Lewis called his great work of apologetics Mere Christianity, in which he strongly argues for a compellingly essential Christianity that could be supported by Catholic and Protestant alike.
Not merely the congenial pipe-puffing chap who will still be delighting children like my cousin for years to come, Lewis saw evil as a serious reality. Talk of salvation and damnation, or heaven and hell, can sound somewhat dubious to our ears, trained to listen to such dichotomies with a waxing skepticism. If you seek encouragement of this suspicion, do not turn to Lewis. He sees our ultimate choice as quite clear in his essay “The Weight of Glory,” writing, “We walk every day on the razor edge between these two incredible possibilities.”
Characteristically, he turned to fiction to portray these two possibilities. The Screwtape Letters, for example, imagines the correspondence between a master demon, Screwtape, and his apprentice Wormwood, who cunningly attempts to secure the damnation of an anonymous modern everyman.
Likewise in The Great Divorce, Lewis dredges the bottom of the human heart to present a psychology of the damned. Though not nearly as dramatic as Dante’s, Lewis’ vision of hell is a terrifying modern equivalent: a colorless and eternally expanding suburb. Sealed off in his house, miles from the nearest neighbor, Napoleon Bonaparte paces for eternity, replaying the Battle of Waterloo in his still keen strategic mind.
Lewis knew he was responsible not only for himself but also for others: “There are no ordinary people,” he wrote in “The Weight of Glory.” “Next to the Blessed Sacrament itself, your neighbour is the holiest object presented to your senses.”
While my own faith journey, often guided by Lewis, frequently leads me into intellectual territory, I have never felt comfortable trying to shrink God into the confines of my own head. In setting some of his most profound and accessible fiction in realms beyond our own, Lewis challenged me to search for God in an unusual place: my imagination. Lewis never allows us to escape our responsibility to each other—whether we are probing the depths of space, the mysterious vastness of the human heart, or cautiously reaching past the fur coats at the back of the wardrobe.
This column was originally published in the May 2013 issue of U.S. Catholic.
Image: Flickr cc via klndonnelly
TagsBooks and literature Personal spirituality Wise Guides