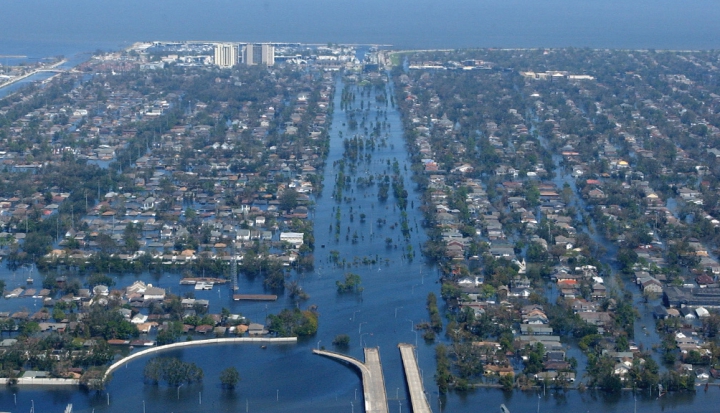 The impact of Hurricane Katrina on the people and parishes of New Orleans was as varied as the diverse neighborhoods throughout the city they call home. For the mostly poor African American households at St. David Parish in the Lower Ninth Ward and even the solidly middle-class African American families at St. Gabriel the Archangel in the Gentilly neighborhood, rebuilding was a slow and steady process. But at St. Dominic Parish in Lakeview, most parishioners owned homes that were insured for a price that paid for rebuilding.

They were among the middle-class and wealthy homeowners who were also, ironically, most likely to receive help from the State of Louisiana, the U.S. Department of Housing and Urban Development, and the Federal Emergency Management Agency (FEMA). A number of homeowners in 2011 sued the Road Home Homeowner Assistance Program because of the formula it used to determine the amount of assistance. A homeowner in a more affluent area qualified for a larger grant than a homeowner in a poorer neighborhood, even though their two houses were exactly the same size and quality, and had suffered the same damage.

That meant that St. Dominic’s parishioners, whose houses were on some of New Orleans’s lowest elevations, were simultaneously in the best and worst of situations after the levees failed. Their church and neighborhood included people who knew how to get things done. Tom Wooten, author of We Shall Not Be Moved: Rebuilding Home in the Wake of Katrina (Beacon Press), notes that neighborliness was strong in Lakeview. People were connected. At the same time, Katrina left their carefully manicured lawns and swimming pools under as much as a dozen feet of water.

Most of Lakeview’s residents had evacuated, and they at first watched French Quarter-based television reporters reassuringly pronounce that Katrina had only sideswiped New Orleans. The French Quarter, built next to the Mississippi on some of the highest land in the city, had dodged the bullet. But Lakeview had not. It would be weeks before the levees were mended and the waters would recede. Even so, St. Dominic School opened in the last week of October 2005, although at another site.

A neighborhood’s civic group staged a rally in the St. Dominic’s parking lot at the end of October, with generators fueling the microphones. Thousands of people came, driving in to hear politicians and other civic leaders speak on how to get their neighborhood back.

Things were more of a challenge in Gentilly. Once people were allowed to return to New Orleans, St. Gabriel the Archangel parishioner Marigold Hardesty and her sister rented a dorm room at Tulane University—the students were gone— and Hardesty hired a contractor, paying him nearly $150,000 to rebuild her destroyed home.

The contractor didn’t do the work and Hardesty took him to court. She was living in a FEMA trailer, a place she and her little dog called home for eight months. “I’d sit there and cry and he’d lick my tears,” she says. The jury found in Hardesty’s favor, and the man paid her back $1,200 a month until he eventually took his own life.

Hardesty says her faith helped her through the worst days. “I thought God was going to provide and help us get back,” she says. “You really have to believe.”

Six feet of floodwaters knocked also down and damaged the hand-carved statue of St. Gabriel the Archangel at the church that bears his name. But the church received a generous helping hand from the Philadelphia-based Interfaith Community Building Group, who reached out and paid for the restoration and return of the statue.

Other statues and stained glass windows around the city miraculously survived nearly or completely unscathed amidst the destruction the broken levees unleashed. One of the best stories comes from St. Louis Cathedral, the oldest cathedral in North America. Troops of the Army’s 82nd Airborne, based at the cathedral, decided to clean up downed trees in the little courtyard behind it. As they cut through enormous fallen oak and magnolia trees, they could see something white in the tangle of fallen limbs.

It was a statue of Jesus with outstretched arms. The only damage was to a couple fingers.

The men took the fingers to the rectory, where retired Archbishop Philip Hannan opened the door to them. “Oh my boys,” he told them. “We’re going to be OK now, the 82nd Airborne is here.” Then he told the young men how he had parachuted into Normandy as a chaplain with the 82nd as part of the D-Day invasion in World War II. “There wasn’t a dry eye in that circle of boys,” says retired Lt. General Russel Honoré.

When the levees broke

As the city rebuilt, questions remained about the levees that had failed to protect New Orleans from the floodwaters. A pernicious urban legend emerged that the levees didn’t fail, but they were instead intentionally blown up to get rid of some of the city’s 67 percent African American population, or perhaps some of the 28 percent of the city’s residents living below the poverty level. Studies have debunked such theories, however, showing the levees failed because of human incompetence rather than human maliciousness. There were more than 50 breaks in drainage and navigational canal levees, setting off what the American Society of Civil Engineers call the worst engineering disaster in U.S. history.

For a long time after Katrina, says Sister of St. Joseph Kathleen Pittman, pastoral associate at St. Gabriel the Archangel, people were fearful it would happen again, that the homes they were struggling to rebuild would just be lost again. It didn’t help that “people in other places were saying we’re stupid to live here,” Pittman says.

“But if the levees hadn’t broken, the city would have been back and running in no time. The wind didn’t cause the damage. It was the levees, which hadn’t been built right, or maintained properly. I don’t think they’d dare let the levees be in that condition again.”

How to build parish community around justice work