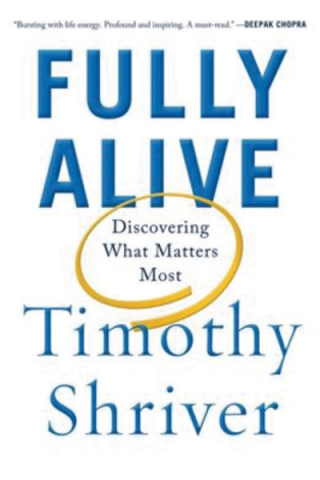 In Fully Alive: Discovering What Matters Most, Timothy Shriver draws us into the Shriver and Kennedy families, sharing stories about his Aunt Rosemary, sister of President John F. Kennedy, who was born with intellectual disabilities. The author’s willingness to reveal his own uncertainties within the context of his Catholic faith allows readers to do the same. He admits to seeking but often not grasping the deeper truths revealed through the lives and witness of individuals with intellectual disabilities.

Fully Alive is filled with stories of Special Olympics athletes whose lives are often overlooked, as well as parents who have fought many battles in defense of their children. Shriver is respectful of the humanity of each person, with depictions that are thankfully never trite or sappy. He tells the story of a burly Special Olympics athlete who, in a burst of competitive fire, almost knocked Shriver out. It paints an honest picture of the athlete rather than a sweet caricature of a person with an intellectual disability.

Shriver’s insights will be new to many but not all. Parents and siblings of those with intellectual disabilities have come to understand and appreciate the dignity and worth of every person. But few are able to articulate that as engagingly as Shriver. Along with quotes from saints and philosophers, he introduces the reader to the wisdom of his friends who live with intellectual disabilities, with accounts too numerous to include here.

Fully Alive is an ironic and timely title, as we are living in an age where people with disabilities are fighting for their very existence. Between 60 and 90 percent of unborn babies diagnosed prenatally with Down syndrome are aborted. Many state legislatures are currently considering the legalization of physician-assisted suicide, a clear threat to those most vulnerable. This book helps each of us understand and appreciate the important truths contained within it.

Janice L. Benton, O.F.S. is the executive director of the National Catholic Partnership on Disability in Washington, D.C.