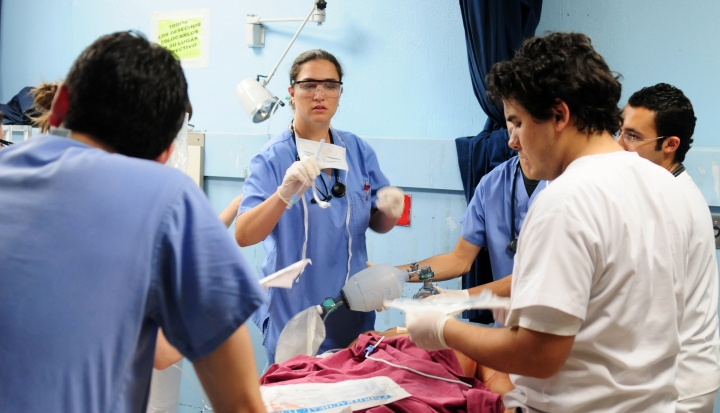 The Catholic Church has long had a major role in providing care to the sick. But what does Catholic identity look like on the new frontiers of modern health care?

The current U.S. health care system is, in large part, an outgrowth of health care institutions founded by Catholic sisters who emigrated from Europe in the 18th and 19th centuries. Upon their arrival in the United States, many groups of sisters had only a few dollars and no formal medical training. Still, they visited the sick and set up informal hospitals during deadly epidemics. They even embarked by horse and wagon into the frontiers of the wild west, facing coyotes, violence, heat, and dehydration.

As their efforts to care for the sick expanded, the sisters invested in the construction of hospitals, where they served as nurses and administrators. They integrated explicit religious practice into clinical care, and their habits were reminders of their Catholicity. In these times, no one questioned what made their institutions Catholic. The Catholic identity engrained and sustained through the presence of the sisters was so obvious that it was not a topic of conversation.

Today, the Catholic health ministry has grown to include 642 hospitals and 1,600 continuing care facilities in all 50 states. One sixth of the patients in U.S. health care are treated in Catholic systems. With this expansion, the proportion of non-Catholic patients and employees has grown dramatically, and far fewer vowed religious hold leadership positions. Fifty years ago, religious women led 98 percent of Catholic hospitals. Currently, only four Catholic hospitals have religious CEOs. Meanwhile, structural dimensions of U.S. health care have pushed Catholic systems to embark on more partnerships and collaborative endeavors with non-Catholic organizations and their employees.

The rise of lay leadership, growing proportions of non-Catholic employees, and an increasingly interdependent and collaborative health care system create a question that the early sisters did not face: What does it mean for a health care organization to hold a “Catholic identity”?

This question elicits a variety of responses. Some may identify moral teachings, especially the highly publicized Catholic prohibitions on abortion, euthanasia, and contraception, as the characteristic markers of Catholic identity. Those who emphasize Catholic social doctrine distinguish Catholic health care by its commitment to justice and charity. Others may perceive religious pictures and symbolism in patient rooms, edifices, common spaces, or signage as indicators of Catholicity. Moral norms, social teaching, and religious symbolism are all important parts of Catholic identity. On their own, however, these elements understate the full meaning and foundation of Catholic identity.

This faith gives birth to a set of commitments, including respect for human dignity, treating patients in a holistic way, promoting workplace justice, prioritizing the needs of the poor, contributing to the common good, using financial resources responsibly, and caring for the environment. The commitments inspire actions, including those described within the church’s moral and social teaching.

At times the organization may be unable to fully realize all of these ideals. For example, to maintain financial stability and provide care over the long term, Catholic insitutions cannot provided unlimited charity care. In spite of practical limitations, patients encounter, sometimes knowingly and sometimes unknowingly, the theological and organizational commitments that constitute Catholic identity.

Although the tangible manifestations of Catholic identity are the subject of much debate, the concept is fairly circumscribed. Catholic identity is an institutional faith in the narrative of God’s healing love and ongoing presence in creation, which inspires particular moral commitments and actions. Thus, the most challenging question for Catholic health care today is not what Catholic identity is. Rather, the challenge contemporary health care organizations face is how to cultivate cultures and make decisions that embody Catholic identity.

Catholic health care institutions seek to ensure the diffusion of Catholic identity into decisions, goals, and actions. Historically, religious communities’ affiliations with the Catholic Church have ensured that the organizations they sponsor embrace Catholic identity and interpret their actions in light of that identity. With decreases in religious vocations, many Catholic health care organizations are transitioning from sponsorship by religious communities to Public Juridic Persons (or in a few instances, Private Juridic Persons), which are groups of religious and/or laypeople who carry on the tradition of the religious communities. The sponsorship model of a Public Juridic Person serves to provide leadership around major decisions and to maintain a link between an organization and the institutional church.

The Ethical and Religious Directives for Catholic Health Care Services, guidelines that direct actions in accordance with the wider theological and moral traditions of Catholicism, also aim to enable organizations to better interpret their obligations and ideals. To inspire mission based action and value based interactions and decisions, employees can participate in spiritual and theological formation that are relative to their position and responsibilities. Catholic identity audits can be a tool for internal evaluation and discernment about future strategic decisions and organizational programs.

Although all of these efforts are attempts to discern and maintain Catholicity, there is no clear consensus on the applications of Catholic identity. Diversity exists on interpretation of the ERDs, the role of spiritual formation, and the use of Catholic identity audits. There are even debates about whether or not palliative care adequately promotes Catholic tradition and values regarding care at the end of life. The church and Catholic health care organizations must continue to discern which efforts are essential or sufficient to sustaining Catholic identity.

As Catholic health care organizations continue to reinterpret how to integrate and apply Catholic identity, the theological and moral commitments that inspired the founding sisters to care for the sick provide a solid grounding. Although Catholic organizations today find themselves in a very different place than their founding sisters, they are also on a frontier. With faith in the sustaining love of the ever-present God, Catholic identity provides an orientation to navigate this new frontier.

This is a web-only sidebar which accompanies “Uncovered: Who’s still not getting health insurance” that appeared in the March 2015 issue of U.S. Catholic (Vol. 80, No. 3, pages 12-17).