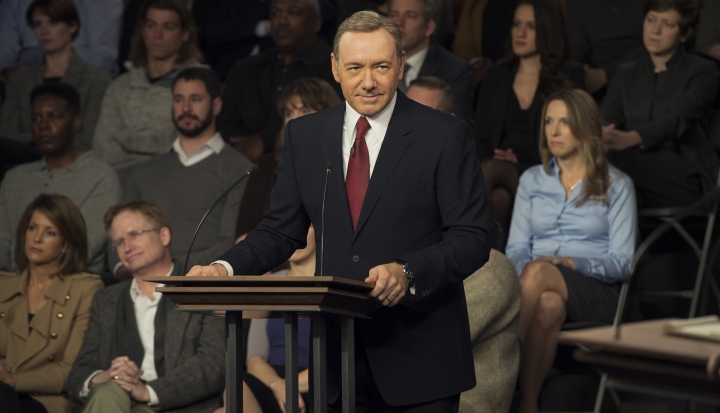 (RNS) All presidents beseech God to bless the United States of America. Many pray for divine aid for themselves or their policies. Some can only wonder at the inscrutable ways of the Almighty.

Then there’s Frank Underwood, who spits in God’s face.

Underwood is fictional, of course, the power-grabbing president and central character in the hit Netflix series “House of Cards.” And Underwood is a notoriously amoral — criminal, actually — practitioner of a realpolitik so brutal that nothing he does should be surprising.

Indeed, in the show’s first season, a frustrated Underwood stopped by a church and looked heavenward to speak to God, then down to address Satan. Finding no satisfying answer from either, he concluded:

“There is no solace above or below. Only us, small, solitary, striving, battling one another. I pray to myself, for myself.”

Still, it is almost jarring when, in the third and most recent season of the political thriller, Underwood — again stymied in his schemes — meets with a bishop late at night in a darkened sanctuary and engages in an extended debate on divine justice, power and love.

Underwood then asks for a moment alone to pray, and in solitude approaches a large crucifix at the altar.

Then — spoiler alert! — he spits on the statue’s face. When he reaches up to wipe the spittle off, the crucifix wobbles and topples to the floor, smashing to bits.

Sure, that scene might seem implausible. Americans want a chief executive who embraces religion, especially Christianity, and for the most part that’s what they’ve had. This is also a small-screen drama, not real-life history.

Yet scholars who study religion and the presidency say the episode provides a valuable window into the spiritual perils of being “the most powerful person on earth.” When things don’t go your way, sometimes it seems the only one to blame is the Almighty.

“To the extent that a president sees himself or herself as called, as on a mission, as ordained, and to the extent that the presidency becomes disillusioning, then they’re grappling with God. And I think that’s natural,” said Stephen Mansfield, who has written several books on the faith of presidents from Abraham Lincoln to Barack Obama.

In fact, said Darrin Grinder, co-author of “The Presidents and Their Faith,” one reason “House of Cards” works dramatically “is that it strips bare the president and reveals what one part of our consciousness thinks is likely true: these men are extraordinary, with extraordinary appetites, drive, and often cunning.”

“My educated hunch,” Grinder wrote in an email from Northwest Nazarene University, where he teaches literature, “is that these men, who are some of the most powerful persons in the world, may very well turn to God in anger, demanding an accounting. Or, like Underwood, they understand the transaction, the cost of the presidency, and simply bear the weight of it.”

Abraham Lincoln’s struggles with faith and atheism bordered on “a blast, Job-like, of despair,” as Mansfield has noted, and through the agonizing efforts to avert, and then win, the Civil War, Lincoln only found solace in accepting that “the Almighty has His own purposes” — a famous phrase from his Second Inaugural Address, delivered 150 years ago this week.

Lyndon Johnson — as savvy as any president about working the levers of political power — often beat his hands on his desk in frustration and demanded why God wasn’t making his life easier.

Perhaps the closest precedent for Underwood’s sacrilege was also fictional — it came in a famous episode from the NBC drama “The West Wing,” when President Josiah Bartlet, a practicing Catholic, stands alone inside Washington National Cathedral and delivers an epic rant against God for allowing so many tragedies.

Bartlet’s beloved secretary had been killed by a drunken driver, he himself was diagnosed with multiple sclerosis, and he was facing political setbacks that could thwart his run for a second term.

Bartlet curses God in Latin, and in coarser terms (“You’re a son of a bitch, you know that?”), and lists all the good things he has done for the country as president — and for what? He lights a cigarette, stubs it out on the sanctuary floor and stalks off.

There’s a key difference, though: Bartlet was a man of faith who was trying to do God’s will and wondering why things weren’t working out.

In that sense, says Mansfield, he was more like Job, or better still, King David, who used the Psalms to challenge God and question why God let so many bad things happen to good people, and why so many bad people triumph. They were men of faith who stuck with the faith.

Most U.S. presidents seem to have been in that mold, said Gary Smith, a history professor at Grove City College and author of a new book, “Religion in the Oval Office: The Religious Lives of American Presidents.”

John Quincy Adams, for example, lost the 1828 election to Andrew Jackson and lost his son (to suicide), prompting him to pour out his grief over these bitter “chastisements” in his diary. “But I have experienced mercy with judgment,” Adams concluded. “Let me bow in submission to thy will!”

Presidents “are much more likely to turn to God in reverent prayer,” said Smith. Lincoln famously said that “I have been driven many times upon my knees by the overwhelming conviction that I had nowhere else to go,” an observation that’s been cited by many of the men who followed him into the White House.

“These men and numerous other presidents have testified that their faith became deeper while in office,” Smith wrote in an email.

Underwood, on the other hand, is (or appears to be) basically one of the bad guys, and he resents God’s intrusion into his own plans for the world. “He’s in competition with Jesus. He’s angry at Jesus,” Mansfield said.

Underwood’s crisis of faith arrived after he had shown a trace of compassion in earlier episodes rather than his usual cutthroat instinct. That, in turn, gave his opponents an advantage, a mistake he did not want to repeat.

So Underwood and Bartlet arrived at the same point, raging against God, but from different directions. Bartlet, like most presidents, returned to the faith, in some form.

Where will Underwood go? God, and screenwriters, can write straight with crooked lines. But It’s hard to bet on a clamorous conversion after watching that episode of “House of Cards.”

Walking over the plaster shards of Jesus on his way out of the church, Underwood paused, bent down and picked up a fragment from the side of the head.