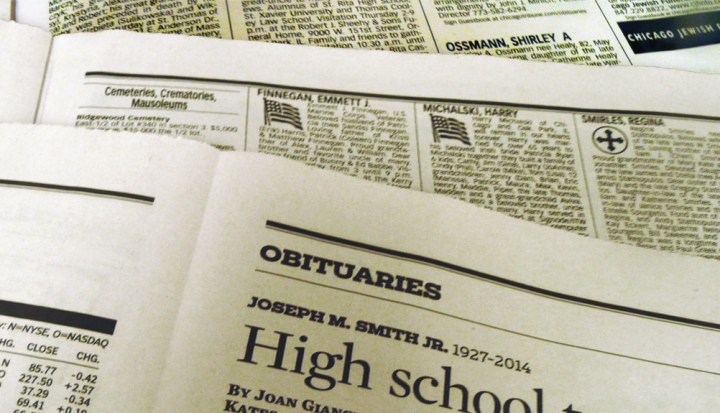 Years ago my sister found herself explaining death to her young son. She tried to present the startling truths in a reassuring fashion. “Well, honey, everyone dies, but it’s mostly older people who’ve lived a long life. It’s not going to happen to me or your dad for many, many years, and not to you until you’re an old man.” “You mean it’s going to happen to me, too?” asked my nephew. “Well, yes,” said my sister, “but not for a long time.” He looked up at her, grinning, and said, “You’re kidding, right?”

Practiced by 7-year-olds and 67-year-olds alike, the denial of death has many allies. Our society, for example, helps prop it up by whisking away the dead at lightning speed: The three-night wake of the mid-20th century has shriveled to a five-hour window or a pale memorial service, discreetly distant from the uncomfortably no-longer-alive body.

So I rejoice at the survival of two relics from the golden age of newspapers. Just crack open or scroll through the morning paper, and there they stand: the obituaries and the death notices.

Known to wags as “the Irish sports pages” (perhaps because the Irish love to ask, “Who died?”), they offer a daily invitation to contemplate one’s life here and hereafter. This practice is of course recommended by the saints, many of whom are pictured cheerfully contemplating a skull that has mysteriously landed at their elbow. No skull? Try the obits.

Let’s take a tour, shall we? Let’s especially invite the people who visit these pages only when they need to track down an address for a wake or a funeral. Obviously, they don’t know what they’re missing.

The Chicago Sun-Times’ obits page contains some of the paper’s best writing, including that of award-winning obit author Maureen O’Donnell. A Catholic, O’Donnell says she was drawn to obits long before she began writing them: Two decades ago she cut out the death notice of a young man, age 20. He had done so many amazing things in his brief time, she says, that she carried it in her wallet to remind her “that life is short, and to be grateful.”

Each day on this page I watch the parade of the recently living, who have so much to tell me. Here’s a perfect example: Up top is the obituary of Clara Luper, dead at 88, who in 1958 prepared and led 14 African American teens in Oklahoma City’s first sit-in at a segregated lunch counter. After six years of these protests, virtually all the restaurants in town had integrated. Luper was arrested 26 times. “She brought the times up to her expectations,” said one of the 14 students trained for the first sit-in. “She taught us how to look white people in the eye.”

Luper inspired many with her activism early in the civil rights struggle. Her obit prompts urgent questions: Do I let fear get in the way of what I’m called to do in life? If people are waiting for a leader, do I consider whether it might be me?

Directly below Luper is the obit of Leonard Stern, 88, who not only cocreated Mad Libs, but wrote for Get Smart, The Honeymooners, and other TV series. Stern once said of the enduring popularity of The Honeymooners, “It’s funny, and it deals with hope and dreams. It makes you comfortable that you’re not them.” Thank goodness for a guy who poked fun at our pretensions—who gave us Ralph Kramden, for heaven’s sake. This obit raises other questions: Do I take myself too seriously? Can I take others’ idiosyncrasies as lightly as I do those of Ralph Kramden?

Here’s Niles North High School English teacher and coach Dan Horyn, who died at 34 from cancer. His brokenhearted students flocked to his Facebook memorial page—4,474 of them in three days, says the Sun-Times’ O’Donnell. “Mr. Horyn talked me out of suicide. He saved my life,” said one. “I lacked a true family, and he guided me,” said another. “He messaged me weekly and made sure I was living a worthwhile life . . . . I owe him everything I am as a person.” Dan Horyn was a Catholic. In his last days at home, his wife told him, “God is here,” and he answered, “God is everywhere.”

Many gripe that papers run too much bad news. But not the obits page. Here stand people like Dan Horyn—everyday heroes, working folks who get their 15 minutes of fame only because they died. Some did heroic or interesting things with their lives, which only their family members know about. How often do the dead get to speak to the living? The obits page is perhaps their one opportunity.

The smaller death notices have become ever more interesting, too. Families work to make their loved ones come alive for the reader. Death notices once mentioned mostly just descendants, but now anything goes.

A delightful notice in the Boston Globe last week told of Ruth Wynkoop, 91, who sang professionally under the name of Teddy Williams (“a tip of the hat to the baseball player”), and who was “exceptionally proud of her service in the United States Marine Corps during World War II, where she was a military transport driver and sang for the troops.” The death notices teem with World War II vets, dying at an alarming rate now. Nurses, Purple Heart recipients, Air Force pilots, Marines—battalions of the dead marching across the pages.

Catholics have never believed that the dead are far off, inaccessible. We call on them, the saints, at every Mass. We pray for the dead and ask them to pray for us. Together with the dead in heaven and in purgatory, we constitute what Catholics call the communion of saints. Their presence enriches us.

The dead in these pages were, like me, recently deciding what to have for dinner and wondering about tomorrow’s weather. They were not all heroic or wonderful. Many of them did not know that death was coming. Each of them reminds me that life is precious, and that my time on the planet will come to an end, sooner or later. What will be the sum of my life? Am I satisfied with my obituary so far? If not, I’d better get a move on.