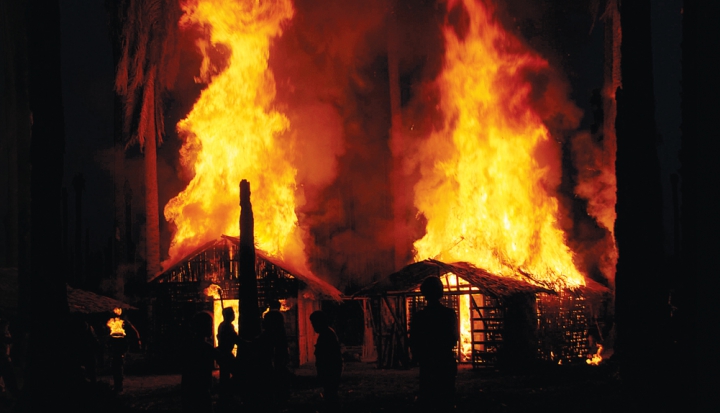 In 2012 Sister Simone Campbell and the Catholic social justice lobby NETWORK launched the “Nuns on the Bus” tour to “live the biblical demand for social justice” and “to speak truth to power” in the name of the poor and marginalized. Campbell and her fellow sisters traveled thousands of miles by bus to call attention to programs for the poor that were under attack from budget cuts. The bus has since made a second tour, which focused on immigration, and now a documentary film is in progress to show how the movement has reshaped debates about values, fairness, money, immigration, and the role of government.

“Speak truth to power” is a phrase attributed to the Quakers, who coined it in the mid-1950s to encourage Americans to speak up against the fascism and totalitarianism they perceived in the culture at the time. Documentaries can be the perfect medium to express belief in making positive changes.

Although Hollywood documentaries that speak truth to power through their stories about social justice and human rights may or may not draw intentionally from biblical principles, they certainly come from genuine concerns for the good of humanity. Because these films attempt to teach truth and often warn us about the consequences of doing nothing to contribute to change, they can be called prophetic. They dare to depict disaster and propose solutions by imagining what peaceful change can look like.

Not all Hollywood documentaries are about social justice, but they all tell a human story. Take this past year’s Oscar-nominated documentaries, for example. The Act of Killing is a weird hybrid of art and history that becomes a call for justice for the leaders of the Indonesian killing squads of 1965–1966 who murdered half a million people but were long considered folk heroes. None of them have been brought to justice.

Dirty Wars documents the work of war correspondent and author Jeremy Scahill between 2010 and 2012, when he discovered the secret, administration-approved wars carried out by the Joint Special Operations Command (JSOC). From Iraq to Afghanistan, America’s war is now synonymous with “America trying to kill its way to victory” through the use of kill squads and drone strikes in a war that has no hope of ever ending, if this continues.

The Square records the difficult realities Egypt faced during the Arab Spring or Egyptian Revolution of 2011. I saw the film at Sundance in 2013 and listened to the filmmakers express their passion for democracy as they bemoaned the lack of a resistance leader who could unify the push for democracy. That the film was even made at all was a triumph for free speech that is still to be canonized in the region.

The film that won the Oscar for best documentary is 20 Feet from Stardom, about the mostly female backup singers of the U.S. recording industry who, since the 1950s, have remained mostly unseen, unnamed, and uncelebrated. It is extremely poignant and filled with the generous gift of a musical soundtrack made possible by these unsung heroines. Their recognition by the film, and the Oscar, offers them a modicum of justice at last.

Another film that emphasized how documentaries speak truth to power is the recent release of Cesar’s Last Fast, a documentary by Richard R. Perez. Using the final fast of United Farm Workers Union cofounder Cesar Chavez (1927–1993), which lasted 36 days in 1988, Perez frames the entire story of Chavez’s life as an activist and advocate for migrant workers. The film is detailed and deeply moving, especially because Chavez’s Catholic faith holds the center of the story and imbues the practice of fasting with profound meaning. When I asked Perez about this, he said it could not have been otherwise: Chavez’s faith informed everything he did.

In March a narrative film, Cesar Chavez by director Diego Luna, was also released about the life of this famous man. It stars Michael Peña as Chavez and John Malkovich as a greedy and malevolent grape grower. It recounts the early part of Cesar’s life and work. The film, though not a documentary, still challenges the continued lack of humane treatment by growers and fair wages for America’s migrant workers.

Maria Shriver was the executive producer for Paycheck to Paycheck: The Life and Times of Katrina Gilbert, an HBO documentary that also premiered in March. It follows a single mom of three who makes $9.49 an hour. A study from The Shriver Report, “A Woman’s Nation Pushes Back from the Brink,” informs the film. It claims that 42 million women in America and the 28 million children who depend on them live at or below the poverty line. This film is heartbreaking and heroic.

Making films that speak truth to power takes the courage of the filmmakers’ convictions, as they are not guaranteed distribution or box office success. Yet they continue to tell the truth through film. When people complain about the lack of decent films coming from Hollywood, I know they haven’t bothered to really look at what’s out there. And if they have, perhaps it’s just that they don’t want their comfort to be afflicted by the truth and accompanied by a call to get up and do something.

Image: The photograph is a still from the documentary The Act of Killing. It is courtesy of Drafthouse Films.