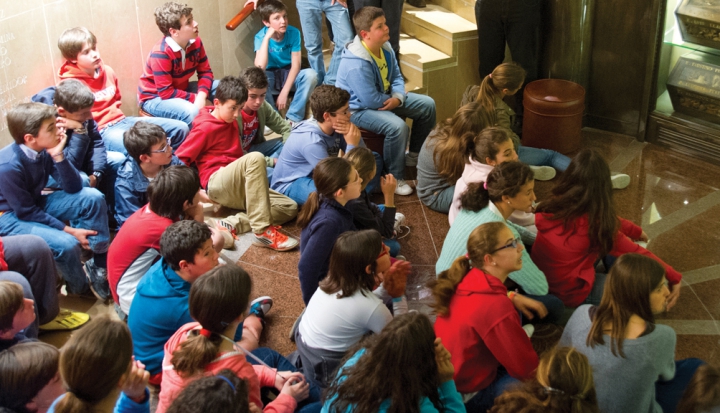 My first year working as a youth minister, I had a group of about 10 or 12 kids who came on a regular basis. These were kids whose families routinely went to Mass—kids you expected to be in a youth group. But then other kids came in who didn’t fit that mold. Some of them came to Mass regularly, some didn’t. Some weren’t even Catholic. Some would go to the Baptist youth group on Tuesday and to the Catholic youth group on Sunday. Some were kids who were extraordinarily in need, who would act out on occasion, trying to get that attention teenagers crave. They were a group of kids who weren’t sure where they fit in.

I’ve seen adults expecting teenagers to fit a certain mold. We can’t do that. We have to welcome every single teenager because we don’t know when we’re being presented with the opportunity to touch a life. Believing in youth and letting them know that they belong—to you, to the parish, to the church—is important.

The U.S. bishops’ 1997 document Renewing the Vision lists eight components to comprehensive youth ministry: advocacy, catechesis, community life, evangelization, justice and service, leadership development, pastoral care, and prayer and worship. It’s not just the job of the youth minister to do all eight. You have to work together as a parish to make all of this work well.

At St. Mary of the Assumption Parish, we’ve grown into a more comprehensive youth ministry program that includes weekly meetings, events, service opportunities, and an active online presence. Here are some of the keys to effective, successful youth ministry that I’ve developed with my parish community.

Believing in youth and letting them know that they belong—to you, to the parish, to the church—is important.

Since youth are members of the parish, they should be integrated into the life of the parish. Sometimes you hear about parishes doing a “youth Mass,” but to have a specific youth Mass could cause others to feel unwelcome.

There are other ways to get youth involved without excluding anyone. You can ask teens to be on the liturgy committee or have a couple of them serve on the parish council. Our parish’s adult formation team invites parishioners to give reflections on each of the gospels during Advent and Lent, and for the past three or four years they’ve asked a teenager to give a reflection.

Our parish sometimes has youth involved in our regular 11 a.m. Sunday Mass, serving as liturgical ministers, gift bearers, greeters, and ushers, as well as musicians and choir members. But it’s not really a youth Mass, because Mass is for everyone. We’re celebrating the gifts of the young church.

2. Listen to their needs

You have to find out what kids of a particular group want and tweak things to meet their needs. Some kids who were part of our event-based youth ministry called me and asked, “Hey, when do we meet in the summer?” We didn’t offer anything in the summer, but they wanted to get together, so we settled on meeting on Monday nights for two hours.

As school got closer—these are high school kids taking AP and college-credit classes—I said, “Do you want to keep doing these weekly meetings?” They said, “Yes, but with school we can only handle an hour.” So now we meet for an hour.

Another group of kids helps me with religious education for sixth through eighth grade. When I took over this junior high program, I began using a youth ministry model; we meet in small groups. After the first year of this new format, three of the kids now in high school came back and wanted to help me. I now have a roster of around 20. We call them peer leaders.

The parish also has to recognize where youth are, and they’re not reading the bulletin. I started a parish youth ministry Facebook page. The things that get the most views are my online Bible studies, which tells me that’s what youth want.

The parish also has to recognize where youth are, and they’re not reading the bulletin.

3. Plan for life after the sacraments

I heard a presentation at the National Conference on Catholic Youth Ministry that described the success one parish was having with its great sacramental preparation for first reconciliation and first Eucharist. Then after second grade, when the children had received the sacraments, it was over. Everyone asked, “What’s next?” The presenter said, “I don’t know what the ‘what’s next’ is.”

If we did the “what’s next” part well, would those of us doing confirmation prep have such a hard time? The question has challenged me. How can we do something for our third through fifth graders that would build upon that fire and excitement that comes not just from the child getting first communion, but from their parents and families too? So when it comes time for confirmation, it’s not, “Tell me the hoops I have to jump through,” but rather, “Let’s go!”? I don’t have a good answer for that. It’s something that I struggle with.

4. Act in the moment

In the wake of the Sandy Hook school shooting, I was watching some of these teens posting things about it on Facebook. It occurred to me, “I really think we need to get together and pray.”

I called our deacon that afternoon and asked him if he was available at 7 p.m. He said, “Absolutely.” It went out via Facebook and e-mail. I had a couple of high schoolers and a parent show up—yes, it was small, and some would say, “Well, that was a bust.” It wasn’t. The teen who inspired it with her Facebook comment said to me, “I’m so glad you had something like this.” It was so powerful.

With teenagers, you have to act in that moment, because teenagers live in the moment. If you miss it, you’re not going to have another opportunity to minister in that kind of a moment.

With teenagers, you have to act in that moment, because teenagers live in the moment.

5. Meet parents where they are

We say that parents are the primary educators of the faith to their children. But often parents are really thinking, “I don’t know a whole lot about my faith, and I’m not sure where to find it out.”

It’s our job as a parish to help and support them. So we’re going to offer opportunities either where families can come together or we can do things for parents to help support them in their role as teachers of the faith.

In our parish, we weren’t seeing our religious education families very often during the year, so we decided to do something once a month. A few years ago, right before Thanksgiving, we started offering a mini-Advent retreat. We ask families where their focus is at that time. Is it on consumerism? Is it on Santa? Is it on the Christ child? Basically, we’re offering families a chance to talk. We also send each family home with an Advent wreath and a booklet on how to pray with it.

We also did a Holy Week retreat for families. At the end we offered the sacrament of reconciliation. It went so well we had people waiting in line. There were some parents who had not been to reconciliation in years, because trying to get there on a Saturday is very, very difficult. Parents were thrilled.

Instead of saying, “Parents aren’t doing enough,” let’s open our arms and embrace them and say we are here to work with you, not against you. That will help them connect not just to the church, but to connect back to Christ and to God in a time when it’s really easy to lose God in the midst of all that goes on in their daily lives.

Image: Photo courtesy of the Claretians

Jennifer Ledonne is a youth minister at St. Mary of the Assumption Parish in Alexandria, Kentucky.