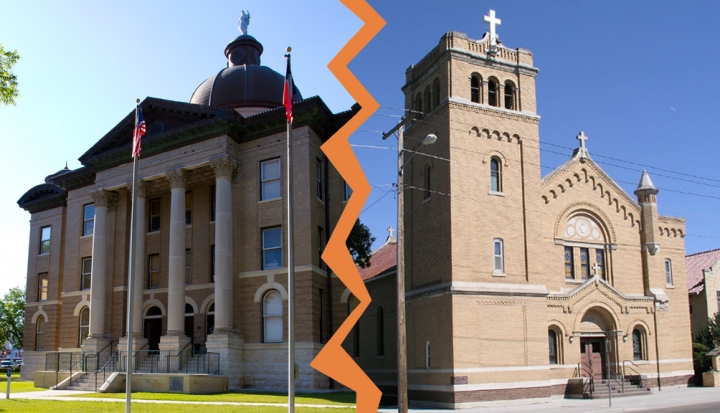 The church should focus on marriage as a sacrament and leave civil marriages to a local judge.

The June 2013 Supreme Court rulings that struck down portions of the federal Defense of Marriage Act and overturned California’s Proposition 8 marked a major turning point in the debate over whether same-sex couples should have access to the civil institution of marriage. That debate, which began slowly with a Massachusetts State Supreme Court ruling; similar rulings in Iowa, California, and Vermont; and successive state legislatures’ legal recognition of same-sex marriage or parallel civil union, is fast heading toward a conclusion.

The Internal Revenue Service’s August decision to grant married filing status to married same-sex couples even if they live in a state that does not recognize their union is further indication that, on the national level, the question of whether same-sex couples can marry has largely been determined.

These developments, however, continue to expose wide divides in society about the definition and meaning of marriage, no less in the Catholic Church. The Catholic bishops of this country have been nearly univocal in denouncing any attempt to redefine civil marriage. Individual bishops have devoted large amounts of financial and other diocesan resources in political activity to oppose changes to the civil law.

Rank-and-file Catholics, meanwhile, seem to be leaning the other way on the issue. Poll after poll shows Catholics favoring legal recognition of same-sex couples—either in marriage or civil unions—by large margins. A Public Religion Research Institute poll in March 2011 found that 43 percent of Catholic respondents support full civil marriage rights, with another 31 percent in favor of civil unions; a poll two years later found that 54 percent support full civil marriage rights with 38 percent opposed, a complete reversal of the findings as recently as 2008.

Given the shift in marriage’s civil legal definition to include same-sex couples, it is time that Catholic conversations about the issue recognize that we are talking about two different realities when we use the word “marriage”—a legal contract on the civil side, and a sacramental covenant between two baptized people on the other—and adjust our practice accordingly. Doing so would allow Catholics to have a fruitful intramural conversation about our theological understanding of the sacrament of marriage without being entangled in the question of whether families and couples who don’t fit that vision should have access to the legal benefits and duties that go with its civil parallel. It would also acknowledge what should be obvious to everyone: Even if civil and religious marriage were once a single entity, the ties uniting those two dimensions have now almost completely unraveled.

One doesn’t have to look far into Christian history to find differences between a general societal view of marriage and what became the Christian vision. Jesus’ condemnation of divorce (Mark 10:2-12; Matt. 19:3-9) questioned the practices of some rabbis in his own Jewish community who permitted marriages to be easily dissolved. Paul’s insistence that women had rights within marriage, to sex for example (1 Cor. 7:1-10), were revolutionary in a Greco-Roman culture in which women were treated as property and divorce was common for the sake of cementing family alliances. His repetition of Jesus’ teaching against divorce (with some exception) made clear that marriage was practiced differently in the household of God than in civil society.

Despite the New Testament witnesses, ancient Christian practice around marriage does not become clear until about the fourth century, as the settlement joining the church to the Roman Empire was becoming firm. Once bishops and priests became civil authorities, the civil and religious dimensions of marriage also became joined—a situation that endured until the modern period.

Many liberal democracies in Europe and Latin America have long required a civil marriage first, followed by a separate religious ceremony, or convalidation, if the couple so desires. But the effects of the “marriage” between church and state in this country are evident every time a priest signs a civil marriage license, the only time a religious leader still acts as a civil servant in the United States—a practice that is against the law in countries such as Mexico.

Indeed, the fear of many Catholics who oppose same-sex marriage is that priests, since they act as civil authorities in performing marriage ceremonies, will be “forced” to solemnize the marriage of same-sex couples, thus contravening the church’s teaching. The easiest way to solve that problem is for priests to stop signing any civil marriage licenses—a duty that can surely be left to a local judge—and only officiating sacramental weddings. Forcing couples to essentially be “married” twice may have the unfortunate side effect of some couples skipping the religious marriage altogether, but even that may open up an opportunity for Catholics to tease out the difference between a civil and a sacramental marriage.

Beyond the relationship between church and state on the matter of marriage, however, there’s simply no denying that marriage in any form isn’t the institution it used to be. Sociologists and historians, notably Stephanie Coontz, have documented the shift from models of marriage focused on economic productivity and procreation to our contemporary “companionate model,” with focus on the relationship and well-being of the partners. That shift has no doubt fuelled society’s acceptance of civil partnerships between persons of the same sex.

While many defenders of “traditional” marriage may insist that marriage is and has always been by definition between a man and a woman, that now holds true only when talking about the sacrament. When it comes to civil marriage, both state legislatures and the courts have already changed the legal definition, just as they did in the matter of no-fault divorce laws, thus undermining the “lifelong” portion of the marital definition. History makes clear that, at least when it comes to civil marriage, the definition has been a moving target.

Catholic teaching in the past 100 years has itself undergone a similar shift. While Pius XI’s 1930 encyclical Casti Connubii continued to characterize marriage primarily as a contract with little specifically theological significance, Vatican II’s 1965 pastoral constitution Gaudium et Spes and Pope Paul VI’s 1968 encyclical Humanae Vitae shifted to the biblical language of marriage as a “covenant” between the spouses. Pope John Paul II’s “theology of the body” elevated church language about the good of marriage, and sex within it, to a further dignity that would likely make Pius XI blush.

The so-called “unitive principle” of marriage that appears in contemporary Catholic teaching—what Gaudium et Spes calls the “mutual help and service to each other through an intimate union of their persons and of their actions”—reflects the broader societal shift toward the companionate model of marriage. Where Catholic teaching goes beyond this model is in its emphasis on procreation as a critical dimension of marriage. While a strictly civil marriage need not include both dimensions—any more than it must include a lifelong commitment—they cannot be absent from the sacramental union of two baptized persons (at least when both partners are physically capable of having children).

Separating religious marriage from its civil counterpart will of course not overcome every social, political, and theological challenge related to same-sex relationships. Lesbian and gay Catholics will likely continue to make known their views on marriage and to ask Catholics to reconsider the church’s teaching on the matter, as is their right under the Code of Canon Law as baptized people (canon 212).

We may, however, hope for some new beginnings. Catholics who wish to can celebrate with gay and lesbian neighbors, friends, and family members the new and important steps our society has taken toward granting civil rights to same-sex couples with less need to explain how one can be “a good Catholic” and still support the civil rights of those couples. People concerned with the religious definition of marriage will be free to pursue its theological dimensions, and all sides will hopefully benefit from a more charitable debate on the matter.

Priests, freed from their civil obligations, will have no concern over being required to violate their beliefs. And bishops, relieved of the need to bankroll ever more expensive political initiatives, can devote time and resources to strengthening the sacramental dimensions of Catholic marriage and family life.

Perhaps together we will come up with a creative new beginning to Catholic reflection on human sexuality and marriage, one that still critiques and challenges the world around us, as the gospel always does, while also offering the encouragement and hope that is the hallmark of the Good News.

1. I believe that same-sex couples should:

2. I believe that civil and religious marriages ought to be separated.

3. If couples were required to have both a civil wedding and a separate sacramental wedding, fewer Catholic couples would get married in the church.

Representative of “other”:
“Depends on who counts as a ‘Catholic couple.’ Those who are serious about the faith would choose both.”

4. I have friends or family who have entered into:

5. A marriage can only take place in the church and therefore the state should be the one to stop performing “marriages” for any and all couples.

6. Even if priests stop performing civil marriage ceremonies, the church still needs to campaign against the acceptance of same-sex civil marriages.

Representative of “other”:
“Campaign, no. Explain, yes.”

7. The definition of marriage as “one man and one woman” should be true for both religious and civil partnerships.

Results are based on survey responses from 435 USCatholic.org visitors.